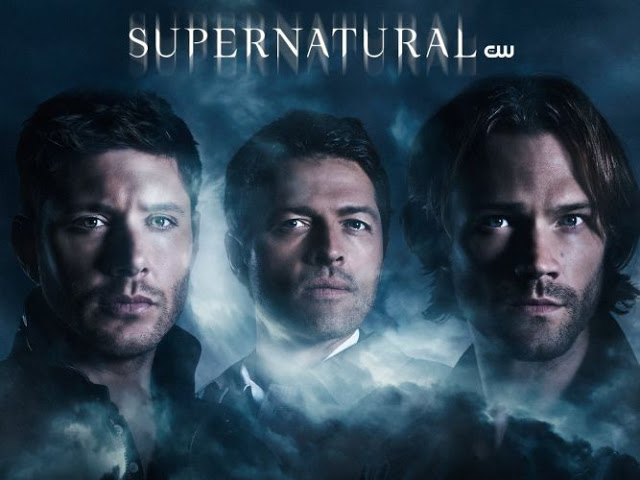 Time for an epic opening with an epic voice over from Dean about how they are the people who monsters are afraid of. Which is, yes, kinda epic. But this is Supernatural. Epic pre-ambles to any kind of find finale need classic rock. It is known. Know your brand, Supernatural.

So we have a bit of domestic moment with Jack eating late night cereal and asking Castiel not to tell his other dad, Sam, who disapproves of high sugar food. Which is kind of cute and I think a lot more of these would have done a great job of turning Jack into someone I actually care about rather than that extra who keeps tagging along for no apparent reason. But really these scene is for Castiel to remind Jack not to tell anyone about the deal he made with the Empty

So that’s definitely going to be future angst. But can I say again that we have another angst or personal drama moment that is centring on Dean even when this should be more Cas’s woe. Dean doesn’t have to be the centre of all.

But we’re back on track with Michael. Naomi has told them where Michael is. Kansas City. And he has a new body, a woman’s.

And I’m sure there are many reasons why anyone, let alone an Archangel, would go to Kansas City

I don’t know what they are, but I’m sure they exist. Yes.

Sam has also snuck Garth into Michaels’ orbit. Since Garth is a werewolf so fits his whole army of monsters thing. Garth hopes to actually not consume the Michael Blood/Grace potion… which doesn’t go to plan because it’s hard to deceive an Archangel and he ends up taking the upgrade potion which is definitely not going to end well.

Between this spying they know Michael’s plan - send his army into Kansas city and turn every one there into more monsters. I am sure there are many… sensible reasons to begin your invasion of North America in Kansas City…

So the counter plan is to get the angel-killing spear from Dark Kaia (Dean and Castiel on that) and Ketch has some mystical golden egg which will help imprison Michael which he’s put in the post. Yes there are convoluted reasons but he still put it in the post. Sam and Jack are off to collect that.

To begin with Sam and Jack are attacked by Michael and it goes horribly wrong because, well, Michael is an Archangel which makes him pretty unassailable. He knocks Sam out, doesn’t kill him because… because… the script says so that’s why! He also destroys the magical egg so that’s out of the picture. Personally I don’t remember the egg was in the picture so there’s that.

Michael also kidnaps Jack because he wants Jack to join his fanclub. Since Jack is like three years old, Michael assumes that after a few millennia of existence Jack will forget all his affection for humans, his dads et al and join Team Michael. Which… is perhaps not wrong? I mean living for aeons is going to make it hard to hold on to the distant memory of his human family. Jack is the closest thing Michael has to a peer and I think it’s a fascinating element that Michael doesn’t want to be the only one in charge - he needs a fellow, he wants to have Jack with him as a companion for the future. He wants to share this newly conquered world… I mean it’s not like he needs Jack’s power which a) he doesn’t have and b) Michael has more than enough of his own power. In fact killing the one man in the world who may become more powerful than him might be a good idea for Michael.

Dean and Castiel do find Dark Kaia and her angel killing spear and Dean makes a plea for it. For once not threatening her but warning her that the whole world risks being destroyed if Kaia doesn’t give them her spear. Which is nice - but he also lies to her, agreeing with her that Jack can help send her home without mentioning that he doesn’t have his power any more

But Castiel notes that Kaia has changed - she was running from home. She insists that if she’s going to spend all her life running from monsters she might as well do it back home where she knows the rules and area but Castiel suspects there’s more.

Sam decides not to hang around waiting for Dean and Cas to help him rescue Sam and goes to do it himself - and… does? I mean he literally walks in, kills two vampires restrain’s a Michael-controlled Garth and then leaves and reunites. Which feels… rather… easy?

Actually this may not be bad writing but the point- because as the gang gathers they realise that they really have no plan. Michael has an army and can sense Castiel coming so they have no element of surprise either. Clearly a cunning plan is needed.

Or they could just attack and hope Dean, who has no training in spear fighting, will be able to stab Michael in the face at some point.

They go with plan B

And he doesn’t - but only because the script says so. Honestly, Castiel and Sam should definitely be dead now but Michael continues to be satisfied in knocking them over. I mean he could even follow his cunning plan and kill them.

His cunning plan? Is to repossess Dean and break the spear, destroying it’s magic.

The newly repossessed Michael Dean reminds them that they shouldn’t have just accepted that Michael let Dean go. Which… to be fair, is really something they should have spent more time examining. I mean, remember it’s a matter of record that powerful Archangels like Lucifer and Michael cannot just possess any vessel without that vessel burning out. Dean is designed to be an uber-Michael vessel. They should have realised that Michael wouldn’t have just let Dean go because anyone else except maybe Sam is just a temporary

So, try and follow this, it turns out that Michael left Dean because Dean was still struggling and squirming. But by unpossessing him, leaving a back door and then coming back when Dean is despairing apparently suppressing him

But Dean wasn’t despairing? We just noted he was actually super up beat? And he just heard that his struggling was inconveniencing Michael. Dean has been given every reason to keep fighting and a huge motivational boost so… why? I am not getting this one at all

This is the midseason finale and I think the whole half season suffers from a lack of focus, especially since we’re going for an epic episode here, mid season. It felt like there was a lot of debate in the writer’s room about where to go from here - or even that they were thrown a lot of elements from the last season and weren’t sure what to do with them

I think the most glaring example of this are the survivors from Apocalypse World. Mary, Charlie and, of course, Bobby, particularly. And I love Bobby and while I’m deeply wary about what they may do with Charlie, it gave them a chance to do right with her after the appalling death of OG Charlie… but the writers seem to have no real clue what to do with them or even to want them around. So they’re given some angst and sent on their merry way to join Rowena in her plot box, to come back whenever needed for a one off. The season opened with Sam leading an army but now we have scenes of the four core cast completely alone in the Winchester cave… we also began by naming and introducing some of the various survivors suggesting that they were going to be developed more but that the writers changed their minds.

Which is also the distinct feel I get from Dean being possessed by Michael… they stumbled along with it for a couple of episodes before moving on and yes we’re returning to that but there was a weird lull. Then Michael was a kind of lurking threat with an army of improved monsters… but we kind of forgot about that? I mean I’d expect some episodes, especially with the army, hunting down more of these but it seemed more of a background element. And the show still has little idea what to do with Jack. Then there was the Empty suddenly and it’s like don’t we already have a big bad this season?

Which made this finale faintly… out of place. Like “Hey Michael, remember him!”

I’m hoping this is less a mark of the end of an arc and more the mark of a beginning, coherent storyline. Or at least some solid monster of the week episodes because, and I realise I’ve kind of said this a lot since Jack appeared - but it’s become BLAH. Not bad but not remarkable