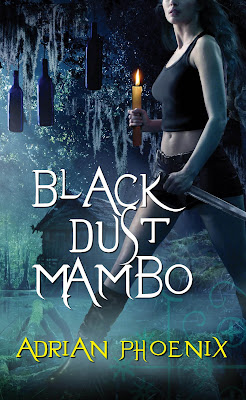 Mild spoiler warning. I don't think much is revealed and I've tried not to but I don't guarantee it.

I liked this book. Yes yes I know, if I start like that you know I'm trying to lay the groundwork against a lot of fuckery to follow. But, no, really, I like this book.

The story follows Kellie Rivière, hoodoo practitioner who has gone to visit a magical carnival run by the Hecatean Alliance, kind of international magic police/UN. It's a time to party and play with your fellow magical practitioners and Kellie has a blast – until she wakes up and finds the guy she slept with last night is now dead in her bed. And worse, the magic seems to have been aimed for her.

She now has to deal with her dead lovers surviving friends and family, the Hecatean Alliance officials and the shadows of her own traumatic past while trying to find out who is trying to kill her, her friends and her family in the name of an ongoing vendetta.

I think one of the things I love about this book is the variety of magic. We have a lot of supernatural worlds in urban fantasy where you have a thousand different magical creatures, such diversity is common. But far too often we just see “witches.” And that's it – they're witches. Magic is magic. But here we saw wiccans and hoodoo and voodoo and more formal Hecetean magic – it's interesting to see the variety of magical traditions there and the promise of more to come in future books. It interests me it does.

It was also fairly new to focus on voodoo and hoodoo as the primary characters' magical tradition. Too often these traditions are the antagonists, the evil darkness, the unknown, the scary. It's nice to see the change.


I also like the story. The menace of magic as an unknown and distant force, of an enemy that can strike without you being able to see it, without you even having to be close to the person trying to hex you. It's a them I haven't seen much outside of the Harry Dresden books by Jim Butcher and it adds an element of menace and tension that mere hissing vampires and snarling werewolves cannot match.

I am also intrigued by Kellie's past, by exactly what she is and what that means. If I had the second book on hand I would have put down this one and picked it up straight away – because I am engaged and I want to know where this is going. I want to know about Kellie, I want to see where this goes next, I even want to see what exactly is going to happen with the secondary characters. I definitely want to see more of the world and more magical practitioners and see this develop further.

I will say I was disappointed by the grand reveal of the antagonists motives and found the whole reason why Kellie was targeted to be pretty weak and convoluted, but I won't spoil it.

But there is fuckery. Oh yes yes there is. Firstly, from a basic writing stand point, Adrian Phoenix really needs to stop doing accents. They're appallingly written and almost provide comic relief in all the most inappropriate of times. Her Creole accent... well, I don't even know how to address that. Mckenna's accent is enough to drive any Irish person into a frothing rage. It's truly awful (and if she is called “leprechaun” or “pixie” one more time I may have to break something. Worse, I have a dreadful feeling that at some point in a future book she's going to be revealed to be fae and then everyone who is calling her leprechaun is going to turn around and be shocked! SHOCKED I say!) And don't even get me started on the “English” people. Really, do not. It was amusing at least.

I actually wish that Lord Basil wasn't gay (as well as not English). He's the only “good guy” to die in the books – in fact there has to be a special prize for originality. I mean, the dead gay trope is hardly new, but killing him off then have his ghost reveal he is gay after being killed must be a new one. The trope is established even before his sexuality is revealed!

And then he spends at least half of his time perving on the super super sexy body he finds himself possessing. Really, he's just been murdered, his entire organisation is in flux until his successor is appointed, he is writing his own obituary and accepting condolences – but about 75% of his mind is stuck on “OH MY GOD LOOK HOW HUGE THIS COCK IS!” Really? Really?

In other fuckery, Kallie Rivière is mixed race but she also has a sassy black sidkick, Belladonna. And she's very sassy, shug. Oh yes yes she is. It says a lot about this character that I had to go back to the book to look up her name, despite her being one of the main characters. Sassy Black Sidekick manages to hang around dropping sassiness most of the book until it comes time for her to be kidnapped and rescued. On the one hand, I'm glad she wasn't a magical servant existing solely to serve the protagonist. On the other, as a powerful voodoo priest, I'd expect her to take a more pro-active role in the proceedings than being a random source of sass and a damsel in distress. There also seems to be an inordinately large number of white hoodoo and voodoo practitioners out there

Which means I am now left covering the problems of Kallie. Kallie has a special form of Spunky Agency that we're seeing time and again and needs a new word – in fact I'm proposing a new trope to be coined named after Kallie Rivière. See, Kallie is a strong independent woman who doesn't take any shit. How do you know this? Because she punches people. No, really. I don't think there is a single person in these books except Sassy Black Sidekick she hasn't tried to punch, hasn't actually punched or hasn't threatened to punch. Is she supposed ton be strong and independent? Because I'm left feeling she needs help with her anger management issues.

Despite the fuckery I will be reading the next book. And I will look forward to it – yes yes I will. But I'm also hopeful of things getting better – which hopefully they will if Belladonna is developed more and Augustine is no longer in the picture. Yes I live in naïve hope. I should know better shouldn't I, yet I still keep hoping!