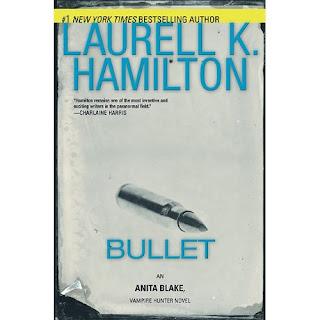 Yes. I read it. I know I know, reading Anita Blake at this point redefines flogging a dead horse. But I feel compelled to finish this hot mess – and it's like a trainwreck, you just have to keep watching. So here I am, suffering through book 19 of the series. Book 19! Ye gods, who would have thought it would last this long

On the actual plot (let's cover it quickly since it's a relatively minor element). And there's some sorta there, carefully sandwiched between the drama, angst and random ongoing side issues.
It would appear the Mother of all Darkness is not dead. Though her body got all exploded, her spirit live son, possessing... the vampire council! And with this power Mother Dark can rule the world (dramatic laugh) and do deadly dark, evil things, using the power – political and metaphysical – of these mighty vampires to feed on death and destruction and raise up to new and greater powers until the earth is swallowed under a tide of badness.
Jean-Claude, Anita & the ever expanding posse will oppose this – by setting up a new Council and becoming a new pre-eminent power and part of this involves binding more power to them – especially the tigers – all the colours. The red and yellow and pink and green, purple and orange and... no, wait, that's Sing a Rainbow. Anyway, Anita & JC must bind to themselves to be the new Master of Tigers and Lord of the Day. Since (if you've been keeping up from the last book, or the one before. I forget, they all involved humping) Mother Darkness' arch-nemesis had these powers before Anita killed him after performing a sex show for him (yeah, I know, I know).
So, anyway. JC & Anita (and the posse) need to gather their power and their multi-coloured day-glo tigers (gotta catch 'em all!) and become the overlord of all Masters in the US to protect everyone from Mother Darkness.
That plot summation could probably have been done with little more attention. Probably. Sad thing is? The plot idea I liked. I was intrigued and the idea of again being forced to gather power to protect themselves and again facing a danger so epic and completely terrifying in scope as this was presented. And it was presented as that – it was literally a “oh shit” moment when you realised what the antagonist was. But it's so damn hard to be engaged in this series now with all the endless sex and utterly pointless angst that get in the damn way. I think the actual plot made up about 20% of the book, if that.