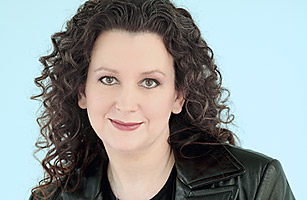 When I first started reading urban fantasy, one of the authors that I was widely recommended was Laurell K Hamilton.  I will admit that when I first started reading her books, I really liked Anita Blake.  Okay, so she was another of those protagonists that is supposedly bi-racial, but has no connection to her ethnic culture, but she was a tough kick ass woman and I liked that.  I especially liked Eward and was willing to ignore Richard and his angst, because at the time, there was a plot involved, that is, until LKH lost her damn mind and the story became nothing more than one long fuck fest.  I have seen porn with more plot than the books LKH is writing now.  Even with all of that said, Sparky, who must have a touch of masochist in him, is STILL reading these books.  I figured that there might be a few other fans out there, and so have I decided to share an interview that she did for those who have not seen it.

PGA: Hit List is your 20th Anita Blake novel – that is a remarkable feat! Aside from Chelsea Quinn Yarbro’s Saint-Germain sequence, I can’t think of a [paranormal fantasy-powered] series that even comes close to Anita Blake in terms of longevity and popularity. Why do you think this saga has had such an amazing run?

LKH:  Fans tell me that my imaginary friends have become their friends too. I also think the fact that I'm still having a blast writing the books shows. You can always tell when a writer has grown bored with her world and characters. The series continues sometimes, because the writer is too popular to stop, but the heart goes out of the world and characters. I still put my heart, mind, and body into my books, and the fans give that same level of devotion.

PGA: After finishing Hit List, it’s apparent that Anita is still growing and evolving – and there is still plenty of room for her  “to play” in this realm. Do you have the overall story arc outlined or is the saga open-ended at this point?

LKH: It's open-ended. I honestly hate over-arcing story lines in my own writing. I much prefer writing Anita more like a mystery series with every book as much of a stand-alone as possible, except for ongoing character development.

PGA: When I interviewed you back in 2003 (for Cerulean Sins), you said essentially that you write for yourself, you write what you wanted to read. Do you still find that true?

LKH: Yes. In fact, when I started the next book very recently I was having trouble getting the book off the ground. I tried several opening gambits, and nothing made me happy, and I've found when I'm not happy I haven't found my beginning. So, I threw out all my preconceived notions of where I thought the book would go, what had to happen next, logical progression, etc. . . .and thought what interests me? What sounds fun to me? I made a list of the characters, ideas, and unexplored avenues in the world that intrigued me. Suddenly I had the opening and then as I wrote the first pages, the rest of the plot just formed. Now, I may still not have the whole plot done; but then again, maybe I do. I'll find out somewhere between 50-150 pages into the book on average.

PGA: We’re in the midst of a glorious Golden Age of paranormal fantasy. It’s the fastest growing category in all of fiction and is continually redefining itself with new releases that explore and expand its boundaries – in my mind, it’s nothing short of a genre fiction revolution. The potential for this fusion of genre elements – fantasy, romance, mystery, horror, etc. – is just limitless. Is there a sense of motherly pride knowing that your Anita Blake sequence primed the pump for all of this?

LKH: Motherly pride? Hmm, I hadn't thought about it like that. *laughs* I am certainly astonished that a type of book that I was told would never sell back in late 1980s/early 1990s has become the genre that, arguably, saved publishing in these rather dire times. The first Anita Blake novel, Guilty Pleasures, was rejected over 200 times. Editors told me the vampire genre was dead, or that mixed genre didn't sell. They had no idea how to market a book that mingled so much in one package.

Finish reading here
Posted by Renee at 6:53 AM