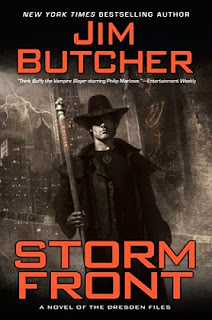 Oh I like this one. And the ooooh means I mean it!
No, I really do. The main character is awkward enough, clumsy enough and generally human enough to appeal. And I like how he is both an awesomely powerful wizard capable of so much, while at the same time being several kinds of dorky and human.
I also love the little tricks of world building like electronics not working near wizards. Little things like that make a world :). Which is big and rich – but I haven't seen it all. Which is good – I'm on the first book and I shouldn't see the whole world in a several book series yet. This is how world building is done – in increments not info dumps, in lots of showing not long lecturous tellings
And I love the magic system, I love the system of imagery and symbolism that makes it up. I like it a loooot :)
But above all I like the story. And I didn't think I would. I'll be honest, the supernatural consultant to the police isn't something I dislike, but it is something that has been done a whooooole lot and it's beginning to feel just a tad tired to me. However Harry Dresden is a police advisor in a Masquerade world that is a little bit of a twist and it was done well enough that it didn't bother me :). I think it also got the right balance for a crime mystery – complicated enough that the detectives don't look like fools for not getting it right away without being so convoluted that the whole thing just didn't make any damn sense at all.
There's a wizard out there and he's killing people. Killing people in big, nasty messy ways. Harry has to find them. He also has to make rent, which is overdue, complete work for one of his few paying clients (being Chicago's only public wizard doesn't pay well – not with most people not believing in magic) and deal with saving himself from the attentions of the same murderous wizard. As an added bonus, the White Council, the wizard ruling body, thinks he's done it and is willing to execute him unless he proves otherwise. On the side he has to deal with a cynical police force that doesn't believe in magic and a curious journalist who very much does.
It's a complicated life, and a fascinating story.

I can't say I am particularly invested in the side characters at all. I had to look up Murphy's name and I still can't remember the name of the journalist contact he has. I'm not entirely sure that's a bad thing – but it stands out in a genre where I am used to many protagonists having several hangers on or at least a significant love interest. This is very much a book about one person, his life, his struggles and his negotiating through the world.
And then there's some problematic stuff I cannot ignore.
The main character is chauvinist. He treats the women around him like delicate fragile little petals he needs to protect. I find it somewhat redeemed by the fact that the women are anything but, that, especially the police detective Murphy (marksman and Aikido expert), is happy to tell him that he's an arse. Fail happens in life and fiction (in fact fiction that glosses over fail I find kinda annoying since it pretends the major fails of the world don't exist) and it's nice to see fail happen and be slapped down.
So yeah it sits poorly but the fact it is called out in the book is something I do like to see. In many ways it's better than pretending prejudice to actually have it exist and then call it out as the arseholery it is.
The book also has a considerable amount of erasure. I don't recall a single POC. In GBLT terms there may have been one bisexual prostitute – or she could have been doing what she was paid for, it wasn't especially clear one way or the other. And she ended up being murdered so I'm not going to give it any points. In fact, the deaths of sex workers and overtly and passionately sexual people, as well as sex being used as a fuel for the nasty bad magic did not sit well with me at all. Sex workers are disproportionate victims of violent crime and being sexual is all too often used as a code-word for being evil and/or is often punished in works of fiction. I like it not, I really don't.
I will say they weren't overly dwelled upon, but still they weren't happy tropes. Despite this, the book, in all, had more positive than negative, and I didn't hesitate to start book 2 the minute I had finished book 1 – which is usually a good sign. I look at this series that spans several books and I don't have the creeping sense of dread I have from Sherrilyn Kenyon or LA Banks (that horrible “there's MORE of this to read? Oh gods...” feeling) in fact, I'm quite
It's not up there with Kevin Hearn. It's not up there with Kim Harrison. I'd probably say it's not up there with Kelley Armstrong or Tanya Huff or even Patricia Briggs (if we drop her last book in a big hole and pretend she never wrote it) or even Mark Del Franco but it's not far behind him and probably ahead of Nalini Singh, another of my favourites. If future books get better, it could match and surpass Mark Del Franco and further up. Well, not Kevin Hearne :P