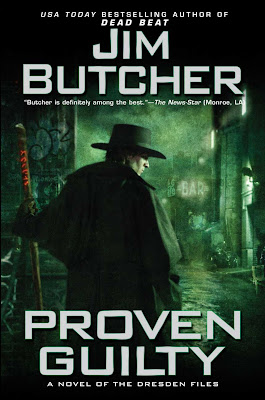 There are monsters appearing in Chicago. Literal Horror film monsters bursting from the screen, killing people and feeding on their fear (I'm actually kind of curious as to who did this first, since I've seen that plot line in about a dozen places). Harry must find out who is doing this and how – before more people are killed – or left living only to have their psyches mauled in the wake of the attack. It hits even closer to home when he sees that Michael's child Molly is directly involved in the horror and she and her friends are at risk.

The war between the vampires and the White Council continues, further confused because the expected support from the Summer and Winter courts has not arisen – much to everyone's surprise. Harry, as the Wizard most closely linked to the courts, must try to unravel why and secure their help

Harry is settling into his role as a Warden, though clashing with the Merlin over the severity of having to execute young wizards whose main mistake in life has been to grow up with power but no education or training. This only becomes more poignant as he is faced with the task of saving a friend's life – in defiance of this brutal policy.

I felt this book started rather slowly, it had a lot of things lurking around without any real connections for far too long. It was still enjoyable, but it was disconnected and the pace could have done with a little fast forwarding I felt

It's nice to hear some more developments in the war, especially the White Council fighting back now with some of the help of Summer, but I'd actually like to see the war a little more front and central occasionally. Harry was a main instigator of the war, he's a Warden, he's an acknowledged wizard of power and ability – but the war constantly rumbles on in the background. I'm also not especially happy with the Winter Court (to whom Harry already owes 2 favours though that never came up) suddenly becoming random because of Mab's apparent instability. I dearly hope we're not dealing with another 'crazy' fairy queen and there's more to it than Mab conveniently developing mental problems just at the worst possible time.

This book was a bit of a let down for me after the last one, partly because that book was awesome, partly because of the start and partly because I don't like the Carpenters. I don't like Michael even slightly. Even explained, Charity's objection to Harry is excessive to the point of caricature. And I dislike the eternal “just have faith” that is constantly raised when they're around when Harry's method has never been to “just have faith” (thankfully for the rest of the cast), it's been to grab his staff, push through exhaustion, draw every reserve he has and get stuff done.

I like Lasciel, I like both the concept of her as the corrupter and the threat she represents as well as the opportunity she represents. However I could do without yet another woman in Harry's life he spends a lot of time drooling over. I'm also leery of her becoming a supernatural Swiss army knife. I know this is what her corruption represents, but I have a feeling of “Harry's in trouble! Lasciel, what bag of tricks do you have! Why, you know how I can turn my hands into radioactive daemon killing keys with lasers? Excellent!”

I love Murphy as a character, I never see her without her kicking arse or without me liking her and thinking how real she is, she is one of the better characters in the series by far – and I think she and Charity make a truly awesome team. Frankly, I think Harry should give her Shiro's sword he's been keeping. When he looks at her through the Sight he even sees a warrior angel. She'd be infinitely better and less of a pain in the arse than Michael (who I still do not like).

They did develop the relationship some here and I'm mixed about it. On the one hand I'd rather them actually do it, become a couple and have Murphy repeatedly bash him round the head. Or them decide no. Instead we've got a “no it would never work.” Which is that age old trope “we loooove each other but we must be sensible because it could Never Work” which basically means your due for several more books of “ill they won't they” with extra dollops of sexual tension. And while it wasn't bad in this book (a few awkward scenes is all) I'm leery of where it's going to go.

Further on Murphy, I'm not happy that she is repeatedly becoming muscle on call for Harry – especially since this time her joining Harry resulted in her sacrificing her career rather spectacularly. Though hopefully it clears the way for her taking up the sword and becoming even more awesome – but I suspect that would involve her being a Sword wielding muscle on call for Harry.

Ok let's address the elephant in the room – Molly. Oh, no, please no, please let us not. Now the whole apprentice Wizard and abuse of powers and how dark magic can corrupt would be an interesting storyline. But a) I'd prefer if his apprentice was a man because of Harry's ongoing problems dealing with all women around him and having him in a position of authority/guardianship/patronising control over a woman is just not going to be good and b) the whole crush she has on him is skeevy and unnecessary in the extreme. And while it's good that he doesn't respond to her sexual advances, again we have the wise and patriarchal Harry in charge making the decisions for the poor silly woman and her silliness. I cringe, I cringe because I cannot see this storyline going anywhere I'm going to like.

Other irritations – the Merlin. I know it's a staple in urban Fantasy – fiction in general – but endlessly incompetent, up-themselves leaders get on my last nerve. Not that a leader has to be nice or super-capable or anything per se, but it'd be nice to have a leader who didn't make you think that if he became a shepherd, the sheep would have more sense.

Inclusion wise we do have several decent POC characters who I like – Rawlings and Ramirez, but they remain bit parts, random inclusions, side-kicks and tools. There is a continued GBLT erasure that isn't surprising

I am going to give this book a 4, but I'm not happy with it. I actually want a 3.75 rating :P. It's better than most of the books we've given a 3.5 to, but it's not as good as many of the books we've given a 4. So it's a grudging 4, by the skin of its teeth, erring on the side of generosity. I thought the pacing was off, the story didn't gel well and there were too many characters who irritated me. Still a good book, but I expected better