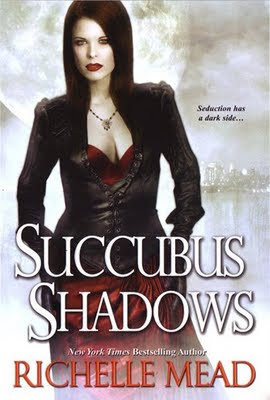 I cannot believe that I have to wait until August 30th to read the last book in this series.  I know that it's only a few days, but I cannot wait to find out how Seth and Georgianna end up together.  Yes, I am actually excited about a romance in an urban fantasy book - somewhere pigs are flying.

In this book, Mead explored the complexity of life. Though Georgianna is technically a lesser immortal and a succubus, as she went through the centuries she experienced relationships that ended in tragedies, each time she tried to be good.  She gave up her soul to end her husbands pain after she was unfaithful.  She took the dying power of a man that she tried to avoid, because she didn't want to corrupt his soul.  In the present she struggles not to sleep with Seth, for fear that she will shorten his life.  Georgianna's intention are always good, but they always seem to end in disaster.  In fact, she makes a point of saying several times that her life is circular.

Questions like why does God let bad things happen to good people and do miracles really exist were explored.  In some ways reading this story kind of reminded me of Pandora's box.  Instead of a box being closed to allow people to hope, in this case a box was opened that provided hope in a situation in which beings had no right to be hopeful. Even though Georgianna has been kidnapped and outright tortured, the idea that the end might lead to a life beyond imagining with Seth, seems to keep her going.  It seems to me that what Mead is trying to tell us that hope and of itself is a manifestation of God's presence in our life, even if she does have Georgianna say, "fucking angels" several times in each book.

Okay enough gushing.  This is the fifth book in the series and we still have not seen a single GLBT character.  I personally have given up hope of any GLBT representation, which is ridiculous considering that the city is set in Seattle.  My other real issue in this book was the treatment of POC.  Eric has been Georgianna's magical negro since book one.  Whenever she needs an answer to a problem he stops what he is doing to help her.  He is absolutely differential to her and even serves her tea each time that she needs his help.  Though she calls him a friend, friends don't only show up when they need a helping hand.

A love triangle clearly developed between Georgianna, Maddie Sato and Seth.  Seth turned to Maddie after Georgianna once again refused to sleep with him, thereby making Maddie his second choice.  He thought it would not be a bad thing because he did care about her however written this way it elevates White women to the status of desirable while constructing Asian women as decidedly secondary.  Throughout this book Seth leads poor Maddie on until he finds that he can no longer deny his connection with Georgianna. If there were more women of colour in this series, the love triangle would not have been as damaging as it was.  Though Mead tried to frame it as true love always wins, it read more like White women always win when juxtaposed to a woman of colour. We cannot deny the racial dynamics at play, simply because this is urban fantasy.  White women have always been constructed as the prize and the natural mate of the White male.  Just as Maddie could not win in this book, quite often neither can WOC in real life.

As I said at the beginning of this piece, only one more book remains in this series.  The only lingering question is how Seth and Georgianna end up together. I am sure if you have read the series thus far, that you have already formulated ideas.  I think it is clear that Seth and Georgianna are soul mates who keep finding each other.  Goergianna makes a point of saying that she always falls for her artists and given that we know her first husband was not only a musician but a man that lost himself in music to the point where he neglected her, much the same way that Seth neglects her for the sake of his writing, I think it's clear that we are talking about the same soul centuries apart. Even knowing that Seth and Georgianna end up together does not reduce my anticipation to find out how Mead resolves this and I suppose that this is the mark of a good storyteller.