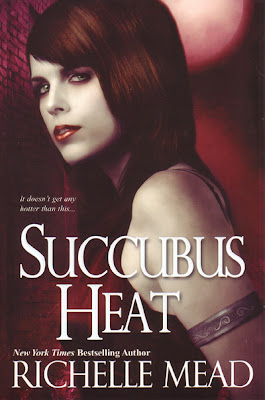 Though I have so many other books on my to read list, I cannot stop reading the Georgina Kincaid series.  This is really out of character for me because the novel is essentially a love story between Georgina and Seth.  It's not quite paranormal romance but it's not far from it either.
In this book, Jerome, the archdemon of Seattle is summoned, causing all the lesser immortals in the area to lose their power.  For Georgina this translates to not being able to shift and not being dependent on stealing bits of people's soul to survive.  For the first time she can actually have sex with Seth and not worry about shortening his life. Suddenly, the prophecy that she would have a child and be with someone that she loves, looks possible for the first time.

Unfortunately, no good thing comes without a cost in Georgina's life.  She realizes that she must rescue Jerome or risk her whole life being torn apart.  It's a case of the devil you know really.  The problem of course is that if she does rescue Jerome, she will go back to being a succubus thus ending her relationship with Seth. It's a no win situation for her because even if she does not immediately find Jerome hell being the organized institution that is, will simply appoint a new archdemon.

What I found interesting about this book is that Georgina was the only one who could be arsed to look for Jerome even though all of the lesser immortals knew that their lives might also drastically change with his absence.  To find him she risked physical danger and even the possibility of being smote. To be honest I really like this version of a strong female protagonist.  Often, what the reader is meant to perceive as the strong woman trope is reduced to ass kicking, but in the case of Georgiana, strength literally means strength of will and that is something that we don't see often in this genre at all.  In many ways, this makes Georgina far more authentic than characters like Anita Blake or Damali. The very idea that strength can and should manifest in different ways, is something that Mead has absolutely mastered.


A lot of the motivation in this series for action or inaction is love.  I believe that love is a very powerful force but the way that Mead treats it is problematic.  Seth and Georgina only dated for three months and yet they profess their undying love for each other, and declare that there will always be a connection between the two of them.  Dante makes the evil deal of a lifetime, which in the end endangers Georgiana and his impetus for action is love - love that apparently occurred in four months of dating.  Roman who as we know attempted to murder Georgiana in the first book claimed that he loved Georgiana as well. Georgiana claimed to love all of these men though of course differently. I think the story would have been better served had Mead made a distinction between caring for someone and loving someone.  Written this way it makes it seem as though love is something that comes easily to people and is a common occurrence rather than the miracle that it is, every time that it happens.

My other issue with this book, was the attempted rape of Georgiana.  She said that she had not worried about being raped since she was human, and felt that her inability to fight, due to inability to shift made her vulnerable.  In a world in which all women are vulnerable to being raped, I found this set up problematic.  The truth is that Georgiana would not have been able to stop Jerome from raping her if he had wanted to do so and therefore, even as a succubus she was always vulnerable.  The way Georgiana framed the rape, made it seem that it is always a woman's responsibility to be prepared to fight off an attack, rather than it being a man's responsibility not to rape in the first place.

Once again, I have to mention the lack of GLBT characters in this book.  It is absolute erasure and I believe that Mead can do better.  I also believe that Tawny shape shifting into a Black woman because it was a turn on for the man that she wanted to sleep with is highly problematic.  Tawny literally allowed this man to  fetishize a WOC.  It's bad enough that there is only one consistent women of the colour into the book without reducing us to a human sex toy. Their was no recrimination on the part of the other characters and in that body not only did Tawny get her mark, she also caught the attention of the archdemon of Vancouver.  This did not take up a major point in the plot but the ease in which occurred once again reminded us of how insignificant women of colour really are in Mead's world.

Finally, I wouldn't be a true cannuck, if I didn't disparage what I consider to be the wrongful use of Tim Hortons in this book.  Having Kincaid go to a star bucks to flout the Cannuck addiction to Timmy's was a slap in face. If that were not enough, having the Canadian satanist gather at Timmys and discuss strategy over timbits was anti-Canadian. Yes I said it, anti-Canadian.  I have a good mind to write a sternly written letter demanding the Mead cease and desist with references to our beloved Tim Hortons.

For all of the issues that continue to appear in this series, I love it.  I cannot even say why I am so attracted to it, only that I want more.

Yes, I took off a fang for the inappropriate use of Tim Hortons. It's petty but yeah.