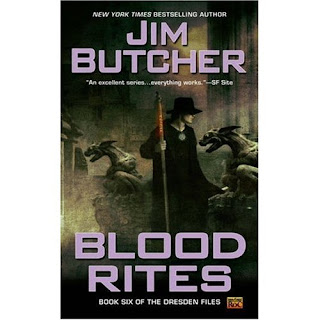 The war between the White Council and the Red Court of the vampires continued to rage (in fact, it seems to include all 3 courts of vampires) and Harry Dresden remains at the heart of it as well as maintaining his limited income doing what jobs he can as Chicago's only wizard in the yellow pages.
Harry's life remains excitingly complicated. The Black Court is in town, perhaps the most dangerous and magical of the vampires and his old enemy Mavra is gunning for him with her followers. He has to take the fight to her before they succeed in bringing him down – especially since the Black Court can multiply so quickly and kill so many people. Meanwhile a new job pushed on him by his old almost-friend Thomas of the White Court leads to him trying to protect a porn studio from a powerful and random death curse as well as dropping him neck deep in White Court politics - and those pretty vampires are so much more devious and often more dangerous than their more brutal cousins. To top it all off, he finally learns more about his missing family – and how they're not all as missing as he had previously thought.
And as an added bonus, he also has to figure out how to pay a mercenary before that mercenary extracts his own payment and disturbing revelations about his mentor. Never a quiet life for Harry.
Yet another book in this series that I loved. Harry Dresden continues to grow as a character and managed to avoid annoying me when I thought it was inevitable in so many places in this book. But both his family angst and his working in a porn studio were handled surprisingly well – I wasn't bored and put off by the angst and Harry didn't skeev me out with all the pretty ladies. He still has a habit of over describing women, but the porn studio was actually handled with a level of respect and dignity I didn't expect.
I love how these books manage to have so much going on yet not feel crowded or padded. Too often when a lot is happening I feel there's a lot of extra nonsense getting in the way of the main plot, in this case everything seemed balanced, linked and, above all, relevant to Harry as a person, the meta plot and the world. I think this is the key to why I love the books – there's enough happening to keep them exciting, keep the pace going, keep it interesting and bring it all together without having all the excess waffle that is so common in the genre. The pacing and content balance is just marvellously done. It makes everything – from family angst to his mentor's revelations to the White Court machinations all just fit together really well.

The image of Murphy as an angel – worn and battered and tired and wounded – but still an angel fighting righteously is an amazing one and a brilliant scene. Murphy continues to grow on me as a character, she's faced with conflicting demands and disapproval of her family, of her job, of being a small woman in such a masculine (and chauvinist) profession and of dealing with a supernatural world she is, in many ways, grossly ill equipped to deal with. She's a very strong character without being almost parody perfect. She has flaws and is very real. And when confronted with chauvinism she slaps it down hard which does a lot to help deal with Harry's “chivalry”. And she can kill things with a gun, with martial arts and with sheer awesome. Yes, I like her – she'd be worth a series on her own to be honest.
Speaking of Harry's chivalry, he managed to reign it in to a degree in this book. I admit when I saw it was going to involve a porn studio I rolled my eyes and prepared for the fail. And it largely didn't happen – as I said above, the porn studio was handled well, there was a couple of moments of classic over-protection from Harry, but otherwise his brain largely stayed in its head rather than oozing out of his ears every time a woman smiled at him
I also loved the world building again, the depth and detail of the White Court fascinated me, and I hope to see more of Thomas in later books. The world keeps growing but never in a way that makes you think you're being info dumped
Social justice wise – well, the chauvinism was scaled back in this one, though I disliked Kincaid deciding he had to test Murphy because she was a woman and again, Murphy kicked arse most royally and is always ready to deflate people. The porn stars were treated generally well, largely humanised except for one (and, well, arseholes are arseholes everywhere, right?) and managing to miss too many pit falls in a portrayal that is so often fraught.
We had the usual erasures, sadly, which is largely what I've come to expect in the series.
This is another book I'd recommend and, despite the slow start, makes the series one I'd recommend in a heart beat.