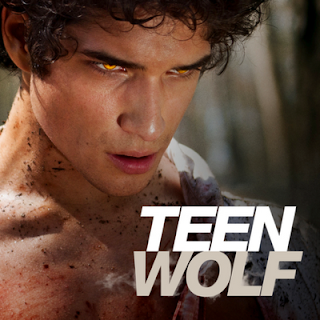 Another week is another episode of Teen Wolf. We're continually impressed by how this teenage show keeps the angst levels down (occasionally anyway)  and how it remains both dark and with a deep nuanced story. It continues to hold our interest and this is one that was well worth our time. What follows is our discussion on episode 10.
Sparky: so mooore lacrosse.

Renee: Yeah I don't know why I should care

Sparky: And teen drama. Awww they're cute, like puppies.

Can we drown them now?
State?
Is he ill?

Renee: No he is excited about going to the state championship
Sparky: Oh look, Allison is an object and a prize again
Why isn't Scott eating this guy yet?
CHEST!


Renee: I knew you were going to say that.

Sparky:I appreciate me some good mantitty :P
Y'know, I'm sure he has a full team of special effect guys to ensure dramatic entrance


Renee: Interesting that they can acknowledge the origins of lacrosse, but cannot have POC on the show


Renee: Oh okay, the attack was to show him what they did to him

Sparky: Wow, his claws cause exposition! He has the power of flashback!
Y'know, I'm kinda with the alpha on this one - I'm all for killing at eating the people burning homes alive with people in them.


Sparky: Honey, either make with the right hand or give Ann Summers a ring. It helps with dreams like that.
Still have to say the dream was well done :)


Renee: Except that upside down kiss is soooo overdone.

Sparky: Still it managed to imply oh-so-much without being explicit and hurting the poor fragile minds of the teen audience :)
Allison's learning the family business - or playing with grenades. Bad idea. Really bad


Renee:Is this also a dream? That sports car is super expensive


Renee: Allison is very cruel.
I love the shot she just gave


Sparky: I think this is revenge here - maaaarvellously well done revenge. :)
WHY is he tolerating this guy pawing his neck? Seriously?


Renee: I know...I think they are going for the whole teenage boy cannot stand against man routine. That is what they did with Scott as well.


Renee:It's not just the touching but the constant interrogation


Sparky:Hey, what do you think will be the effect on the Hunters, if they end up killing Jackson as the mistaken beta?


Renee: Is Jackson a jackass? Who the hell pushes a werewolf?


Sparky: Sounds like a death wish to me. Someone please eat him


Renee:And that whole me I drive a Porsche line was just so asshat


Sparky: Or Allison could shoot him. That would be good
it's really establishing him as a spoiled little rich kid with an entitlement complex
"Shoot it" oooh, Allison picked up a level of badass. More of that please


Renee: Yeah actually I have been trying to figure out what female protagonist from urban fantasy they are modelling her on


Sparky: She'd need to be more of a personality for me to tell yet.
Oooh she's being romantically stalked! How loooovely.
"You don't think I'm a stalker for stalking you do you?"
Hey! Stalking coupled with returning the bling you stole totally works!


Renee:That is just nasty. Why do people drink milk out of the carton?

Sparky: In our house? To annoying people in the house
whoooa, not to much? Damn, even for tacky American booze that's a lot
Wow and it kicked in in 2 seconds


Renee: Also, how the hell did he not realize how much he was drinking?


Sparky:whoa, plot development! They're all coming together. more and more I'm agreeing with the alpha
He drinks another quadruple like that and he'll die!


Renee: And who lets their teenage child pressure them into getting drunk?


Sparky:Heh, half my male relatives :P
And 2 thirds of the female.
Damn... more angst but it's well done. That was pretty powerful for a comic scene
And from well done angst we end up with teen angst. Yay
Is she a doctor or a nurse? Because that's a biiiig expensive looking house for a 1 parent household
She is a nurse but you're right that house cannot be explained.


Renee: Saw that one a mile away though


Sparky: True. Let's see where this goes. I'll be honest I am more and more on the pack side.


Renee: Yeah but this gives Scott the whole protect my wimmenz routine

Sparky:Yes if you touch her I will be grr and rawwwwr and pound my chest. Ugh!
I am disappointed. They missed the chance to have him shirtless


Renee:Well now you can oogle Jackson, who is not smart enough to be scared of a werewolf?


Sparky: Oooh recruitment drive. And yeah not being afraid of a werewolf is not cowardice, it's common sense

Sparky: I didn't think he could? I thought only alphas could turn not betas?
That compliment? Creepy? oooooh extra creepy. Get out now. out.
Poor Stiles.


Renee: He just got his car fixed.

Sparky:But yes, nicely done. I raise my glass (and not of cheap nasty booze).
Renee: Scott should just let Jackson get eaten.

Sparky: I would. I'd hold their coats
Y'know I want to agree with Spooky Alpha Guy but his routine is making it really hard.
Behold the power of the Exposition Claws!


Renee: Now Jackson has the good sense to be scared.


Sparky: Oh he got told!
Damn it I wanted to see the werewolf fight! they're usually well done


Renee: Damn cheap lighting effects, I would rather have seen a werewolf fight


Sparky: Chances of Derek being dead? Pretty slim I'm guessing
Waaait, he is involved? I thought he was a red herring?
Totally didn't see this


Renee: I knew something was up with the vet.


Sparky: I admit, totally had him pegged as a red herring.
Allison's joining the family business... shame, I kinda want her father and aunt to die
Great sound track though


Renee: That whole storyline is ripe for teenage rebellion though


Sparky:Oooooh, Scott's going to do some rescuing I guess.


Renee: Or maybe the alpha


Sparky:Yep, Allison is going to have a dramatic "you're the monster dad! YOU!" moment while crying over her wounded boyfriend while Scott does the same with the Alpha. They can have a total "our leaders are monsters but we're good and pure and..." Oh, get me a bucket