Review of The Taste of Night: The Second Sign of the Zodiac by Vicki Pettersson 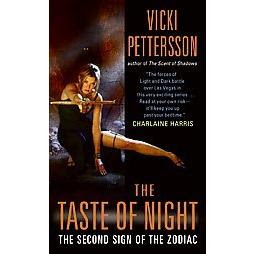 When we last left Oliva/Joanna she had rooted out the spy in the light, met the Tulpa and come to terms that are life had changed forever.  In The Taste of Night, Oliva/Joanna must live with the results of her decisions.  Though she has developed an attraction for Hunter, her heart still belongs to Ben.  The fact that she belongs to shadow and light continues to cause friction between her and the shadow warriors.  She fears that they will never trust her. Within the turbulence of all the conflicts, chief among her concerns is to seek vengeance for the rape that she just barely survived at the tender age of fifteen.

There was a lot of world building in this book, but it did not slow down the action in the slightest.  We learned how the comics are made which document the actions of the Shadow and Light warriors.  We learned that it is possible to kill the Tulpa and that we are quickly approaching a time when Oliva/Joanna will bring light to the world if she manages not to shift to the dark side.  In some ways the play between the dark and the light reminds of Star Wars and the Matrix. Of course, even when this approach was taken in Star Wars, it was not new, because it very much is a spin on the bible.  What makes Pettersson's Zodiac books different, is that this time, the chosen one is a woman.  I find this transgressive, because 'woman' has always been constructed as the downfall of man, rather than the savior.


Despite the fact that the book is set in Las Vegas, there continues to be a decided absence of GLBT people.  There is however a suggestion of a male on male rape perpetrated by a shadow warrior.  It is absolutely problematic to remove any and all suggestion that two people of the same sex can love each other and then include a same sex rape.  It suggests that sex between men can only be violent and predatory.  The other reference to GLBT people occurs in passing when it is mentioned that GLBT are dying in a plague in the Las Vegas area.  Unfortunately, the plague is spread by kissing.  When you think of how many GLBT people have lost their lives due AIDS, this plague is absolutely problematic.

The other main erasure in this series occurs when it comes to people of colour.  I do not understand for the life of me, how it is possible to set a book in LAS VEGAS and not have a single person of colour.  There is erasure and then there is ridiculous.  I suppose that I should be thankful that Pettersson, threw people of color a bone in the last book by introducing a character very briefly, because it looks like the rest of the story is going to be one huge Whitetopia.  Hey, White folk looking to escape the evil darkies, Pettersson believes you should move to Las Vegas, but when you get there, you will find it is not nearly as White as she has constructed it to be.

The other real fault I found was the continual dismissal of Joanna's/Olivia's feelings about being raped.  The man that raped her and left her for dead, not only did not spend a day paying for his actions, he was actively harming other people.  Of course Joanna/Olivia wanted justice and to reduce this to a ridiculous hunt for vengeance was both demeaning and silencing. On several occasions this man assault Joanna/Olivia and attempted to kill her and yet she was continually denied any understanding as a victim. I found this to be extremely triggering and dismissing to those who have survived sexual assault. Furthermore, this approach makes it seem like sexual assault is something that survivors should be able to easily put behind them.  Sexual assault is one of the worst violations of personhood and it should never be reduced in this way to advance the plot of any book.

I enjoyed the plot of this book and I continue to be engaged by the story but the fails are beginning to mount.  I have certainly read books with far worse fail than The Taste of Night, but that does excuse Pettersson for erasure and active minimization of sexual assault.  I am happy that Olivia/Joanna continued to fight for justice, and that her voice and experience was allowed to be heard; however, you cannot present an ism without it actively being understood to be wrong or it presents as though the isms or violation is normal and acceptable.