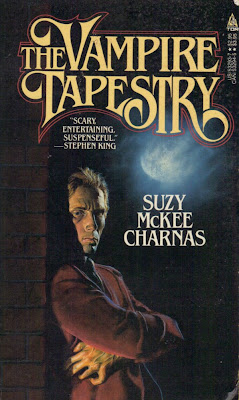 Our hunt for new series to read is ongoing and often on our blogs, or the podcast we request new titles.  We are especially looking for books that are progressive and have good representations of marginalized people.  Because all of our blogs are social justice related we have a tendency to trust the recommendations. The following is the recommendation that we received for the Vampire Tapestry


“I also recommend The Vampire Tapestry by Suzy McKee Charnas for vampire fiction fans. I read it years ago but it's a very interesting take on the Vampire mythos with just scary good, brilliant writting..”


We need to thank you. Up to this point we were forced to constantly refer to Charlaine Harris’ Aurora Teagarden series as our example as the most fail possible.  It was awkward, because we were constantly referring to a book outside the genre and justifying it based in Harris’ urban fantasy series. But no more, now we have a book that is worse than Teagarden – a book within the genre that sets a new limit for awful. So, thank you.


I’m sorry, this review does descend into a lot of snark - but oh gods this book was PAINFUL. Honestly, we got through this only by emailing each other in snarky glee. This is also why this review is a collaborative effort. I warn for MILD spoilers but not many.


Ok, before we get to that I suppose we should write a brief synopsis. This book is several short stories linked together, following the life of Weyland, the vampire. The vampire is different from most in that he is presented more as a scientific, evolved creature more than a mystical being. He’s also the only supernatural being/entity/force in the book. In truth, the lack of any mystical elements makes me question if its even properly Urban Fantasy.


Anyway, Weyland is strong, heals well, agile and feeds on blood through a  spike under his tongue. he lives a long time through several periods of protracted hibernation, making him in some ways a time travel since he moves from era to era, separate by long periods of sleep. As I said, this story follows the vampire through 5 short stories. In many ways the story focuses on the people in these short stories rather than the vampire himself, yet again making me doubt the Urban Fantasy element because there’s so little focus on the vampire himself and far more focus on these normal people who, frankly, aren’t very interesting and we move on to a next set before they can becoming compelling - or even more boring


The book is also full of fails and because of this we’re going to have to address each story separately.
The 1st story: Centres around Ms. Apartheid otherwise known as Mrs. De Groot who is the cleaning lady at the university where Weyland is teaching. She is the Supreme Queen of Fail. Even though she has lived in the U.S. for twenty-five years she is “careful in everything to do with blacks in this country.” We learn that she grew up shooting and savaging South African Blacks for sport and that her husband Henrik demanded that she never speak of politics. She often makes oh-so-wonderful side references like “Savage decedents.” De Groot is also firmly anti woman as can be seen by the following, “A woman who used her sense and carried herself with self-respect didn’t get raped but saying so to these intellectual women wasted breath.” Yes, that is an actual quote from the book. Mrs. De Groot lashes out at women repeatedly that is when she is not busy asserting showing her ass and asserting her White privilege.


In some ways this could be redeemable if she was just a hateful bigot character, especially if she was called out on it - erasing prejudice is not praiseworthy after all. However not only is this woman a horrible bigot but she’s also in many ways presented as more intelligent and worldly than the people around her. She’s the only one who recognises the vampire for who he is and is hailed by other characters for being “wordly” and having “lived in the real world.”


The 2nd Story Is less faily and centres around a teen observing Weyland. We do have some big slut shaming and so dismissing of a woman who wouldn’t “lie back and relax and enjoy it”


The 3rd story: This section just devolves into reading the therapist notes of Filora, a therapist who is examining Weyland. I’m impressed - it manages to be as boring as LA Banks, as poorly written as Stephenie Meyer and as overly-wordy as Cassandra Clare. And it adds to this a disjointed, nearly incomprehensible style that is all of its own. It’s virtually illegible, you barely get any sense of what’s going in, but be consoled by the fact that you probably won’t care.


Unfortunately, what is comprehensible is the fact that Weyland finds gay men to be prey.  He tells Floria, “Hunting women is liable to be time consuming and expensive.  The best hunting is in the part of the Central Park they call the Ramble, where homosexual men seek encounters with others of their kind.  I walk there too, at night.  In the Ramble I find someone who doesn’t reek of alcohol or drugs, who seems healthy, and who is not insistent on ‘hooking up’ right there among the bushes. I invite such a man to my hotel.  He judges me safe, at least: older weaker than he is, unlikely to turn out to be a dangerous manic. So he comes to my room, I feed on his blood.”


When Weyland is not talking about feeding on gay men he is stalked by Kenny another patient of Floria’s.  Clearly Kenny is negotiating a mental illness but his constant usage of the word f@ggot is disturbing to say the least. He clearly despises Waylan for what he presumes Weyland’s sexuality is.  If the first section of the book is dedicated to racism and anti-woman thoughts then this section of the book is dedicated to the promotion of homophobia.


Floria who is supposed to be the rationalizing force because she is Weyland’s therapist is far too self involved to care.  When she is not berating her daughter for becoming a “house frau”, she is angsting and ignoring her patients to the point where one of them accuses her (correctly) of not paying attention.


The 4th story: is Puccini getting royalties for this? She spends innumerable pages basically giving us a summary of Tosca. Only in a sufficiently over wordy, ridden-with excessive superlatives manner that would make even the greatest opera aficionado cry and decide to watch monster-trucks instead. The point behind this entire wasted chapter is to inform the reader that the vampire can be moved by art but when you consider that the same point was made in less than a paragraph in the last chapter, it is redundant as all hell.  I suppose this what happens when you give drunken monkeys book deals.


Weyland himself in this is once again safely ensconced behind the ivory tower.  For food he develops a relationship with his T.A.  Nothing like a little abuse of power of sustenance.  He develops a relationship with a fellow professor named Ira who ends up killing himself.  Unfortunately, as with all of the other characters, we don’t know enough about him to care that he is dead.


I had hoped by this point of the book that the author would have run out of fuckery but clearly that was my optimist side showing and not my realist side.  After reducing gay men to prey in the 3rd section, you would think that Suzy McKee Charnas was finished with heterosexist claptrap, but being an equal opportunity hater, she of course had to make an attack on lesbians.  Hey, did you know that if you fuck other women and make a living as an artist, that you are not to be taken seriously?  That’s right between your gender and sexuality, society will deem you irrelevant and no real threat to a white, mature, male professor. So, the underlying message in this book is that feminists are all man hating assholes but White men are powerful and wonderful.


Honestly, even aside from the fails, I can’ t say the writing was compelling to me. The writing was often disjointed and rambling (or full of Tosca) the focus was hardly ever on the actual vampires and the side characters were not even remotely connected to each other. It is a very unique take on the vampire story, I have to say. And this is a good thing - because “unique” means there’s no more books like this out there.


Some books need warnings because they’ll send you to sleep. This needs a warning because it may cause you to attack all publishers in a berserk rage.  Really, was no environmentalist concerned about the death of trees to print this wretched book. Would I recommend it? No, I don’t hate anyone enough.

We've given this 0.5 fangs because it's our lowest rating. Sadly, we don't have negative fangs

Email ThisBlogThis!Share to TwitterShare to FacebookShare to Pinterest
Labels: 0.5 Fangs, I'll never get these hours back, vampire tapestry