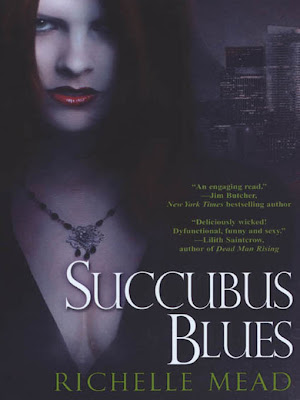 After reading the entire Vampire Academy series, I was not exactly excited to read anymore Richelle Mead.  The only reason I gave this book a shot is because it is not Y.A.  I know, I know another adult running down Y.A.  The truth is I don't mind Y.A. if the story is good my issue is with the angst. Having gone through my teenage years once already, I don't want to relieve them. Alright so I am off on yet another famous tangent.

Let's start with the usual.  Once again we have a book set in a major city and there is no mention of any GLBT people. Georgina, the protagonist, works in a book store, but apparently no one in the GLBT community reads, or is interested in taking the dancing lessons that she teaches there. The only time same sex attraction occurred was Georgina had ingested a pure soul.  Unfortunately that was cast as even women are attracted to Georgina, as though two women being attracked to each other is a complete oddity.

In what is clearly an act of tokenism, Georgina and her dates Seth and Roman both eat at various Asian and Latino restaurants, but having an actual character of colour, with a large role to play in the book was somehow impossible.  Reducing interactions with people of colour to eating our cuisine is literally eating the other.
Georgina Kincaid is a succubus who is not living up to her role. As a succubus she is supposed to be a part of the forces of evil, corrupting good souls through sex in order to feed her succubus urges. Instead  she avoids dating, relationships and all interactions with good men. This does not make the archdemon Jerome very happy but it is the only compromise that she can live with, that is until she find love.  When she does have sex she does so with great relish and is never ashamed of the act itself only the after effects on the innocent.  This is truly a rarity in this genre because there are many instances of slut shaming when sex occurs outside of loving relationship.


Much of this story involves Georgina's yearning to find love.  She longs to have someone to share her life with.  A huge part of her still aches for the children that she can never have but she knows she has to deal with the lot that she agreed to that long ago life when she traded her mortality to ease the ache of a lover that she had betrayed.  Centuries without love is a step price to pay for one act of infidelity.

Unfortunately Georgina becomes tangled in an age world between angels, demons and nephilim.  How can this Succubus engage in a battle with higher immortals when she isn't even gifted with the speed and strength of her vampire friends?  In a struggle that asks the question are things every really black and white or are there shades of grey worth embracing, Goergina is forced to make a decision as which side she will take.

I really liked this book and actually read it almost in a single sitting.  The world is very large and having never read a story about angels, demons and nephilim (the children of angels and women), I was completely drawn in.  There were some very interesting play on biblical passages without being overwhelming and I look forward to finding out if Lilith (the original woman) will make a larger appearance in the series.

I officially forgive Mead for the Vampire Academy series.