Review of 'A Quick Bite' by Lynsay Sands 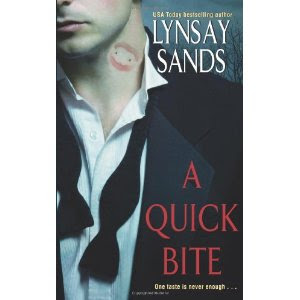 A Quick Bite is the first book in the Argeneau series.  I accidentally read Love Bites, the first book in the series first.  A Quick Bite is yet another paranormal romance, and so this means the usual boy meets girl and zmog they're in love forever and ever routine.  As I have stated many times, I am not a fan of paranormal romance, but I was willing to give this book a try after enjoying Love Bites for its humor.
The plot really is quite basic.  Lissianna, a 202 year old vampire meets Greg after her mother kidnaps him for her birthday. Greg assumes that he is to be a human sex toy, when in fact he was kidnapped to cure Lissianna of her phobia.  Yes, she's a vampire who passes out at the sight of blood.  At first she assumes that he is a special dinner, as vampires consider it a treat to come across an undiagnosed diabetic for the sugar in their blood.  Greg is resistant to being tied up and served for dinner, but when he sees Lissianna, surprise surprise, it's instant boner time cause she's just that special.
Vampires are normally able to read minds, wipe memories and plant suggestions in the mind of humans, but Lissianna is unable to do so with Greg.  Apparently, this is an indicator that she has met her true life mate.  Everyone say awwww.  Worry ensues because if Greg's memory cannot be erased, he certainly cannot be allowed to wander the earth with knowledge of who and what they are.  Instead of being scared witless, he goes grocery shopping with them and out for breakfast -- 'cause that makes the most sense.  Eventually Lissianna decides that Greg is really at risk when Uncle Lucien one of the oldest vampires in existence  shows up and the two of them make a getaway on a bicycle.  They end up roaming around downtown Toronto together.
I could tell you more, however that would spoil what was left of this very, very thin plot.  Once again we have an all White cast and this is exceedingly ludicrous, because the book takes place in Toronto.  As with many books in this genre and particularly so with paranormal romance, the characters are all straight.  I have come to expect this erasure however, I was particularly disgusted with Greg revealing his disgust at the very idea of feeding off of man, because of the closeness involved.  It read like very thinly veiled homophobia to me.
Honestly, in terms of social justice, this book was not any worse than the first book.  I suppose the difference arose in the lack of real humour to shield the fuckery.  Where Love Bites had me laughing,  A Quick Bite had me wondering when they would just declare themselves in lurve forever and move the hell on already.
I did however enjoy learning more about the world. I like the idea that the vamps are really just evolved humans.  In the Argeneau world the vamps became who they were because of being injected with nanos meant to cure illnesses.  It was actually a happy little scientific accident, except for the fact that sun weakens them and they have to feed the nanos blood to survive.  It certainly is an interesting take on vampire lore and mixing this with making them the survivors of Atlantis makes it a truly unique twist. I found myself wishing that we could learn more about the vampire council, and what it was like to live in Atlantis, than in learning more about the romance between Lissianna and Greg.
I am not writing this story off, even though I wasn't amused this time, because the world itself is fascinating.  I am also aware that my personal bias towards paranormal romance makes it difficult for me to read a book like this and completely embrace it.  Sands has shown me in Love Bites that she has a potential to at least add humour to the humdrum paranormal romance genre, and I am willing to give her another shot.