Turn Coat by Jim Butcher, Book 11 of the Dresden Files 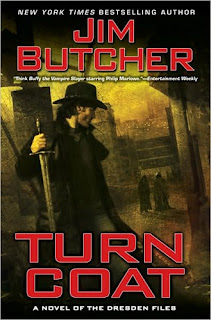 Morgan, the Warden who has made Harry's life a misery, the Warden who has assumed Harry was a Warlock, persecuted him, attacked him, constantly looked for an excuse to drive Harry over the edge and give Morgan an excuse to execute him – arrives at Harry's door. He's injured, he's been framed for a crime he didn't commit and he's being chased by the other Wardens. And he wants Harry's help – to shelter him, to hide him and to help clear his name.
The Black Council is upping the ante – the White Council is buzzing with news of treachery and it's manipulations not only dragging in the White Council, but setting them up for a confrontation with the White Court as well as involving some of the greatest powers in the US. The White Council itself seethes with politics where truth and justice are rapidly pushed aside in the name of power, appearance and strength.
And Harry dives into all this feet first, as he ever does.
Yet again I liked this story and I have to say it was another story that brought the epic. Especially when Harry began to draw all the forces together at Demonreach. It was an epic moment and an epic battle. I've said it before and I'll say it again, Jim Butcher can write some truly immense battle scenes. The description of magic, the right balance of the action without it being too wordy or convoluted – it just works. It's exciting, it draws you in and makes me love every word of it.
Similarly we have the same staples that Jim Butcher does so well – there's a mystery, it is neither ridiculously convoluted nor boringly simple. There are nuances and red herrings, there are hints and there are multiple things and factions happening at the same time. It all comes together into a well woven and complex story balancing metaplot with current plot, the mystery with character development, action and excitement with exposition and dialogue. What can I say? The man writes an incredible story.
I also loved how the Senior Council was portrayed in this book. Because we see a lot of the poor decisions they make, the Council has made the impression of being bumbling, incompetent buffoons in need of a good slap. And I'm not saying the slap isn't still warranted but the greater insight into the politics that bind the White Council have fleshed them out a lot more (the Merlin and Ancient Mai are still; not my favourite people, however). I also liked to see the power of them – yes I admit to liking my flashy shiny scenes, but seeing Listens-to-the-Wind, Ebenezer and especially the Merlin turn round and make it abundantly clear that THIS is why they're in charge – ultimately because they're brilliant, amazingly powerful wizards who can go toe-to-toe with anything else in the world was something we needed to see. And I'm glad we're not just settling for the simplistic “boss is an arsehole” trope. Yes, he's an arsehole – but he's a capable arsehole with reasons for his arseholery.
Social justice wise, we have some POC in the form of Ancient Mai and Listens-to-the-Wind but neither play a particularly adfvanced and huge role. They exist, again, to show that the White Council is a large and diverse organisation – but it doesn't change that this Chicago is enormously, overwhelmingly white.
I am not happy with Luccio in this book, despite being extremely bad ass she is taken out of the picture very early with injury. Her romantic entanglement with Harry was never something I liked and the way it developed here – with more vulnerability and fragility from Luccio, as well as Morgan being so heroic on her behalf, annoys me – she's the strongest and most powerful woman in the books, but like the Archive we have to see her vulnerable and weakened, protected and rescued.
I'd also like to see more of Murphy, more of her life and issues as we saw before. As the books become more complex things have to be shelved, but Murphy is rapidly becoming an assistant or thug Harry calls on whenever he needs her. And though I love their rapport, Murphy is becoming a tool.
There are some kinda-sorta depictions of gay, lesbian and/or bisexual attraction here. Kind of. There is an ongoing theme that the White Court, the vampires who feed on sex, will feed on anyone (though they seem to go eternally for the opposite sex, despite the implication). And the implication is nearly always followed by a strong indication of how sexually depraved and decadent the White Court is – never more blatantly revealed than visiting the White Court club Zero. Even then, we never really get beyond the realm of vague implication.
This portray itself wouldn't be awful if it had something wider to base it on. But the sad thing is that after 11 books now the only reference we have to GBL people (no T at all) is some really unfunny humour with Harry and Thomas being thought to be gay and constant implications with the oh-so-depraved and dangerous White Court (and sexually predatory at that – literally predatory. White Court vampires feed through sex, injure and kill through sex and are generally deadly through sex)
The social justice fails are the same fails that have dogged 11 books of the series, so I don't think they're going to change any time soon. Story and characterwise, I love the books, I pick one up and read it within the day, they are hard to put down and they always drag me in. This is a series I feel I will regret when it ends, because my weekly dose of epic never fails to put a grin on my face. It's a classic example of the great books we love, but sadly we have to work past the erasure to do it. But I do love them.