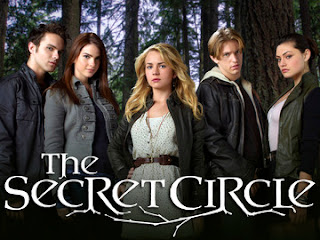 We begin with Cassie practising with her new super powers and finding she has lots of power and no control – she quickly flees the scene. We then do a quick check in on the Scooby Gang for some random characterisation. Nick (the Hot One) is an arsehole who loves himself,. Melissa (the Other One) is something of a doormat, especially to Faye, and Faye is a Mean Girl still
Cassie gets to school and we get another new character (ok, I'm going to have to start taking notes), Sally, the class president – and she's black (inclusion beyond crowd scenes?) Don't get your hopes up, she's quickly interrupted by Faye interjecting for some more Mean Girl. Really, just about everything Faye does or says is for the purpose of establishing how Mean she is. Anyway the mean is to establish that Binding the Circle stops the members from using magic individually, only collectively therefvore controlling their powers. Faye hates this and says it will put 'fascist' Diana in charge of their magic which she doesn't want (I can't say I blame her, I wouldn't want Chief Scooby in charge either). Cassie's having none of it and they go to class where Faye is Mean Girl and Melissa is Mean Girl Doormat – they poke Cassie with magic and she turns round and pokes back a lot harder by accident. Cue Cassie angst and fleeing the scene while Adam follows (going to change his name from Love Interest to Puppy Dog).

So Adam (Puppy Dog) and Cassie go to the Scooby House for a Private Study Session (hem hem). We find out here that during the last Circle every one of the Scoobies lost a parent, except Nick lost both because their magic went wrong. We learn, again, that binding the circle increases the circle's power, but reduces their individual power and we get some more magic 101. Eventually Cassie flees the scene (again. Seriously, Cassie every scene in this programme ends with Cassie running away)
There follows some generally character development. Faye & Nick are all “No Binding! Go Team Mean.” Diana is all “Bind the Circle! Go Team Musty!” and Melissa is a doormat.
It's actually an interesting continuation of a trope that we often see in vampire series – there we usually have a good, but rather boring and up-himself vampire being musty and dull, contrasting with a fun, free (and usually sexier) “evil” vampire who doesn't want any rules. Here we have Team Musty – Diana and Adam, a bit musty, rather boring, not very sexy, but so very goood. And Team Evil, with Nick and Faye – free, fun, sexy and evil. And in between we have Doormat and Cassie who have to chose between them (in vampiredom, it's usually 2 love interests) I would like to see where it develops and whether it gets the same nuance we have seen in the numerous vampire series.
Meanwhile, among the adults, Faye's grandfather, Henry, shows up (another character, just what it needed) and it's apparent that he has no love for his daughter-in-law, Dawn, (the headmistress, Faye's mother). Dawn calls Charles (Diana's dad, the one who murdered Cassie's mother) worried about Henry's visit and whether he's “on to them”. Henry meets up with Ethan (Adam's dad) who has called him – telling him about Charles attacking him with magic. This apparently shouldn't be possible – because the Grandparent Circle stripped the Parent Circle of its power. But Henry has seen Faye and Melissa using their powers and confronts Dawn. Magic is afoot!
Dawn, rushes to Charles and demands the crystal – apparently containing their remaining magic – so he doesn't waste it any more.
Moving on, there's a party most of which is more character development (which would be more useful if they actually had more character to develop, so it's more character repetition really) when Faye (Mean Girl) uses her power and nearly kills Sally (see, you knew there was a reason for inclusion!) Dawn rushes down to heal her using magic from the crystal – witnessed by Henry. Charles whines at Dawn for wasting the crystal and Dawn slaps him down - “we don't kill innocent children.” Before you mistake it for concern for Sally, she explains that she doesn't want the guilt of killing Sally to destroy Faye.
Henry confronts Dawn – and she uses the Crystal to kill him with a heart attack to stop him reporting to the Elders and taking their powers. He warns of some big bad being unleashed if the kids do bind the Circle...
Speaking of, Faye's guilt and Sally's near death serve a purpose – the Scoobies agree to bind the circle to stop more people getting hurt. The gather on the beach and have a rather cool ceremony. Interestingly it talks about facing the Forces of Darkness – I'm curious.
On the whole, again I'm intrigued. There's a large cast of characters but not too much happening to make it hard to follow. Now they've bound the circle, it implies that the whole plot of the story isn't going to be them squabling among themselves, Musty vs Evil so I wonder what the full meta-plot will be. Yes, intrigued, going to stick with that.
I'm, as is probably indicated above, not particularly impressed with the treatment of Sally, she has virtually no screen time, is nearly killed, is saved only to save Faye from her own guilt and used as a tool only to push Faye and Cassie into accepting the circle binding. Poorly used and abused.