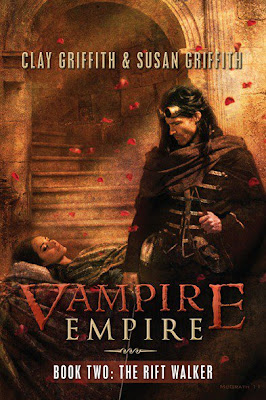 The Rift Walker is the sequel to The GreyFriar by Clay & Susan Griffith.  When I realized that The Rift Walker had finally been released I was ecstatic, and more than ready to jump into this amazingly unique world once again.  When we last left prince Gareth, he was in Edinburgh and princess Adele has returned to her home in Equatoria, an amalgamation of states that formed after the great killing - the event in which vampires made their presence known to the world, by slaughtering humans en masse and occupying the majority of the global north.  Even though they are thousands of miles apart, Gareth and Adele long for each other.  At this point I think it is important to tell you that if you are looking for a straight paranormal romance, this is not book for you.  The romance plays a role in the story, but it is not the main theme of the story.

In order to secure an alliance with the Americans, Adele is forced to agree to an arranged marriage with the arrogant, brash Clark.  She is particularly resistant to the marriage, when she learns that as part of his war plans, Clark intends to destroy the vampires food supply. Since vampires feed on humans, this means that he intends to slaughter innocent men, women and children, all in the hope of winning the war, but Adele who has spent time with them, finds it absolutely abhorrent that these people should be annihilated. Her reaction to his proposal showed a great strength of character that is often lacking in female protagonists in this genre.

When Gareth learns that his brother Cesare plans to kill Adele and Clark on their wedding day, he sweeps in and whisks Adele away.  Together they must battle for Adele's right to rule Equotoria, deal with traitors and fight vampires as the specter of Cesare looms large. If that were not enough, Adele must learn to negotiate her newly found powers in geomancy to protect those that she cares about, without hurting Gareth.  I am so tempted to tell you more about this story, but doing so would cause you to miss a fantastic adventure, that is absolutely a feast for the mind (yes I am fanpoodling).

On a social justice front, people of color are again in servile positions.  Much of this can be attributed to the fact that the protagonist Adele is royalty.  Adele is described is as half Persian on her mother's side. Unfortunately, once again the parent of color is absent which as we know is a trope in urban fantasy.  Like Mercy Thompson, Anita Blake and Adele, when protagonists are mixed they often are do disconnected from the part of their heritage that is of color, it nigh impossible to count them as characters of color.


Adele is one of the few protagonists in this genre that I can say that I legitimately like.  She is not prone to spunky agency, and is considerate of those around her.  In The Rift Walker, we see her mature from a wisp of a girl, filled with romantic thoughts, to a woman in control of her own destiny. At times she plays the sexist expectations to her advantage, and at others she simply declares her will, as she refuses to be silenced, or manipulated.  I honestly believe that Adele truly represents a womanist/feminist framework and that is pleasing in a genre rife with so many straw female leads.  Adele does not need, or want a man to save her, because she is fully capable of saving herself.

It is a rare author who is able to introduce an ism in a way that the reader is able to see a clear injustice. This is the second time that Clay and Susan have made a specific effort to challenge an ism in their work that I have read thus far. In The Rift Walker, Clay and Susan really delve into elder abuse in relation to Cesare's treatment of his father.  When Gareth visited his father King Dmitri, he noticed that he was confused, poorly fed, and lying in his own filth.  At this point, Cesar sees his father as nothing more than an albatross around his neck, and therefore; seeks to keep him alive, only as long as it takes to secure his position.  It is Gareth who sees the neglect and abuse, and cleans his father.  Though this is happening in a mythical family of vampires, elder abuse is a common everyday occurrence that often gets over looked. Many seniors today are living in the exact same position as Dmitri.

Though this series has one of the strongest female characters that I have seen in the genre, and has actively interrogated class, elder abuse and ageism, the complete erasure of the GLBT community is inexcusable. As I said in my review of The Greyfriar, it does not make sense that every GLBT person on the planet was exterminated in great killing.  Active erasure of GLBT community is not something new in the genre, but that does not make it any less prejudicial or heterosexist. It really is a shame, because Susan and Clay have managed to craft a wonderful story, while actively challenging several isms.

If you are looking for a story which actively interrogates the issue of ageism and class, as well as possessing a  strong female protagonist, this is the series for you.  The writing is superb and I found myself easily drawn in the story, treasuring every word. It is not often that I am able to unequivocally recommend a book, but in this case not only should you buy a book, but buy one for a friend, I promise they'll thank you for it.