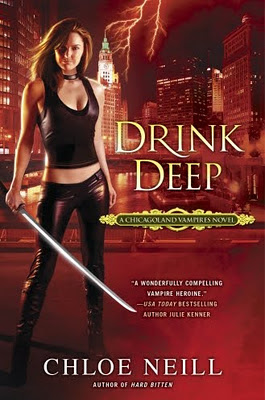 Even though I have had issues with the first four books of this series, I was very excited to get my hands on Drink Deep.  When we last left the Cadogan vampires, Ethan was dead, having jumped in front of a stake meant for Merit and Merit was in a deep state of mourning.  I always knew that Ethan was going to be resurrected it was simply a matter of if Neill could write the story in a way that would seem realistic and compelling.

In the wake of Ethan's death, Malik has become the new master but the GP is threatening to disband the house.  The investigator demands a healthy diet for all vampires, cuts the blood rations in half and demands that vampires stop feeding from each and other and from humans.  Vampires are no longer allowed to congregate in groups larger than 10.  With all of the stress going on, somehow Merit has to find away to discover why the elements are not acting properly.  First the lake stops flowing and turns completely black and then the sky turns red.  The humans begin to believe that not all are the vampires responsible for the disruption but that they are potentially seeing Armageddon.

To solve the mystery of the imbalance Merit must visit, a siren, the queen of the fae as well as discuss the history of magic with none other than Tate. Someone knows the answer to what is going on, but can Merit find the answers before the final elemental sign becomes unstable?


What I liked about this book is that Merit finally seemed to have grown up.  Even though this series isn't technically YA, at times in previous books it read like that with Merit referring to vampires who were well over a 100 years old as boys. The language from other vampires still needs work, because the colloquialisms sound ridiculous at times.  How many times can one say true dat?

In exchange for the maturing of Merit, Neill added some pretty obvious appropriation of real marginalized bodies to her story.  Diane Kowalczyk, the new mayor of Chi-town is determined to bring the supernatural element to heel, as a path to the White House. "She was a big supporter of the proposed supernatural registration law, which would require all sups to register our powers and carry identification papers, We'd all have to check in every time we entered or left the state." (page 22) If this sounds eerily familiar it is because it should.  I am quite positive that Neill channeled the Juan Crow laws currently being employed to attack undocumented workers. Merit goes to great lengths to point out that this law is not fair because they are Americans.  By extension, does this make the racist laws currently targeting Latino undocumented workers fair because they are not Americans? Had Neill had Merit complain that the new law unfairly criminalized them, then perhaps the analogy would not have stung as badly.  As it is, it makes perfect sense for the humans to want to be aware of exactly who the vampires are and their capabilities considering that vampires are predators whereas; undocumented workers do not present a real threat. The fact that Neill chose to create this false equivalency in a world that is largely White is yet another troubling factor.  How can there be no people of colour residing in Chicago?

The other obvious appropriation was from the GLBT community.  Keep in mind that there is not a single GLBT character in this series to date, and yet Neill had no problem co-opting the language at will. For example on page 36 Neill writes, "He set up my grandfather's office, and when vampires came out of the closet, he positioned Chicago as the frontier of the supernatural relations in the U.S". Closeted vampires - really?  Then on page 235, "You are helping her do this." I said, not really concerned that I was outing sorcerers".  The closet is a an experience that is specific to the GLBT community and using some thing so harmful and applying it to nonexistent supernatural creatures is not only wrong but smacks of appropriation.

Though I enjoyed this book, I would be lying if I said that it was full of suspense.  It was pretty easy to figure out who was responsible for the imbalance fairly early on and though it means a spoiler, I have to say that I am uncomfortable with the idea of magical addiction.  Addiction is yet another series condition that destroys families and ends lives.  Though Neill did a good job in showing that addiction destroys relationships, I'm not comfortable with addiction based in magic.

I liked this book for what it was and I will continue to read this series.  I am interested to see where Merit and Ethan end up.  I am also interested to see how much wider Neill can make her world.  Learning more about the fae and the power that they wield added a lot to this story.  I can only hope that as Merit continues to mature, that the vampires around her will as well, and that Neill will stop basing her story on real world issues, which harm marginalized people.