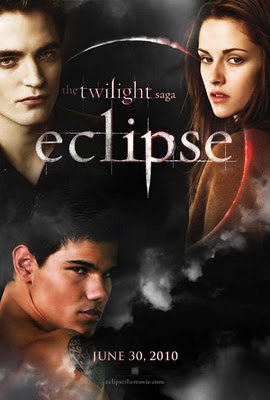 Well, Twi fans, the moment is almost here.  What better way to get ready for Friday's big debut of The Breaking Dawn Saga Part 1, than to recap Eclipse. The movie begins with Riley Biers being chased through the city by a very determined Victoria and quickly changes to Edward and Bella in a field on a beautiful sunny day.

Though Bella is trying to study for an English final, Edward does his best to distract her, only stopping to ask her to marry him.  Bella quickly counters with "change me", and he agrees to change her if she agrees to marry him, calling it a compromise.  He tells her that where he comes from that is how people say I love you, and she counters with, "where I come from, at my age it says I just got knocked up." She follows that up by telling him that 2 out 3 marriages end in divorce, but ever quick on hes feet Edwards says, "I think you'll find the vampire/human divorce rate to be much lower."

This exchange is the first in the series, in which Bella is clearly thinking clearly.  She is absolutely write, marriage at that age is a recipe for disaster and her parents are living proof of this, the pressure that Edward continually puts her is just another example of his desire to control her.

When Bella returns home, Charlie tells her that he wants her to get some separation from Edward but in typical teenage fashion, she responds with, "he's in my life."  In a great compromise room, he agrees to end her grounding if she spends some time with her other friends, specifically Jacob, who is really hurting now. "I remember when that was you. When you needed a friend, Jake was there."

After calling and getting now answer, Bella decides to go and visit him, only discover that Edward has purposefully disabled her truck.  "Bella, you have to understand, you're safety is everything to me." She tells him, "Jacob is not going to hurt me", but Edward responds with, "not intentionally, but the wolves have no control." She tells him that she has until graduation to Jacob but he responds with "I'm sorry" and faces forward.  So much for the spunky in control Bella.  This man has limited her movement and now seeks to control who she is friends with and how she does not see this as classic abusive behaviour and end the relationship right there is beyond me.  I suppose in Twilight world, abuse is okay as long as he says that he loves you.


This is not the last bit of manipulation Edward engages in.  When he reminds Bella about the tickets his parents purchsed for her birthday, he does not ddo so because he believes that she would like to see Renee, her mother but because he does not want to tell her that Victoria is in town and that she is in danger.  It's Bella's life which is at risk but apparently in his great wisdom Edward believes that she does not have the right to know about this.  He claims to be protecting her, but this kind of omission is not how an adult treats someone they consider their equal. Furthermore, it is worth noting, that the only real danger that Bella has been in to date, has been directly because of her relationship with Edward, with the exception of the out of control van in the first movie. Isn't it funny how the ever so White and pale skinned vampires are supposedly civilized enough not to cause her harm but the dark skinned and apparently savage wolves cannot.  Just so we're clearly, I am suggesting racism.

Later, when Bella does finally manage to sneak out to the reservation, she learns that Leah and her younger brother have become wolves.  This is a difficult situation because Leah and Same where in a relationship before he imprinted on Emily.  Talk about love triangle.  The movie did not explore this, but I believe it is worth noting that the only reason Leah can shift is because she cannot have children.

When Bella does return home, Edward knocks on the door seconds later in a rage.  He tells her that he was worried sick about her, and actually considered breaking the treaty to ensure that she was safe.  Awww look at him showing his abusive form of love yet again. Edward quickly enters the house because he smells another vampire.  Riley had been in the house to pick a few items with Bella's scent to give his newborn army.

Back at the Cullens they realize that they are going to have to take protect Bella. It is Bella who suggests bringing in the wolves, citing that the Cullens will not be able to find Victoria, hunt and guard her.  It seems suddenly the dark skinned wolves aren't all that dangerous, now that they can be used in a way that Edward approves of - the protection of Bella.  As long as they are serving Whiteness and under control, the wolves (read: Native people) have a place.

Alone on the reservation, Jacob takes his stand trying to get Bella to admit that she loves him.  She tells him that she thought he understood.  Yep, now that her true love is back, Jacob needs to learn his place.  He responds by kissing her and she hauls off and punches him, breaking her hand in the process.  As he is pulling into Bella's house, Edward comes screaming in and threatens him for touching her and tells him that he should have waited to be asked. For the first time, Edward has a point.  Even if he didn't want to say the words, he could have leaned into her asking non verbally, thus allowing her to assent by moving towards him, or by giving her time to pull away if that was her desire.  The best example of this is the season ending kiss between Damon and Katherine (whom he thought was Elena) at the end of the second season of The Vampire Diaries.

Back at the Cullens Bella makes a sarcastic comment about being able to take Emmet in a battle only to have Rosalie storm out in rpotest.  Apparently, she is jealous because Bella has the choice that she did not have.  Rosalie was raped and left for dead when Carmine found her and changed her.  What she wants is the opportunity to grow old, and sit on a porch and watch her grandchildren play.  What she misses is the chance for things to change. Rosalie is angry because she sees that Bella is giving this up, but what she presuming is that this is Bella's wish because they are both women.  Once again, gender is a determinant and a master of what women want and need.

The other thing women don't so in the Twilight universe is to have pre-marital sex.  Alone in a room with Edward, Bella tries to seduce him, but he tells her that he is worried about her immortal soul.  REALLY?  This apparently is the one rule he does not want to break.  So now Edward has appointed himself protector of her virginity, how nice and patriarchal of him.  He is saving Bella from her own lust.

In end, quite unsurprisingly, they defeat the newborn army, and Bella agree to marry Edward.  Yeah, for following patriarchal norms.  Twilight Eclipse, was not as angsty as New Moon, but the acting left a lot to be desired once again.  It is no surprise that despite the money these films have made, that no Oscars or Golden Globes were given for acting. Kristen Stewart's performance was particularly bad.  She seemed to have inability to connect with the role or with her fellow actors.  At one point, I found myself wondering if she was actually physically incapable of making eye contact with anyone. The character of Bella is intentionally blank; however, the way Stewart acted, she barely registered on film. Finally, Jacob's sickbed scene, should honestly go down as one of the worst scenes ever put on film.  It's a good thing that Taylor Lautner has decided that his future lies in action movies, because if this is the best that he can do in a dramatic scene, I'm not sure that even acting school can save him.