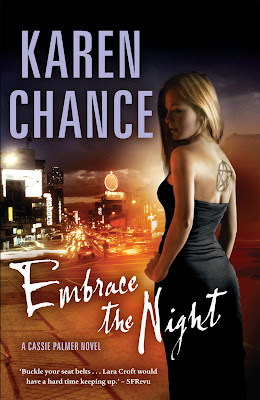 I have to admit that this series is really growing on me, though Chance has not given up on her love of bringing dead stars into her stories.  In Embrace the Night we were introduced to Jim Morrison's ghost which last long enough for me to roll my eyes.
In this story, Chance really enlarged her world which I would have believed impossible to do because she had already used so many super natural beings in the other two books. The world consists of fae, both light and dark, witches, Demons, Incubus, vampires, Ancient Greek Gods, and Merlin from Arthurian legends.  Clearly a lot went on in the story but Chance managed to keep it all straight.  I think that it takes a great imagination to have all of these mythos in one book, without having one group over power another and Chance does this beautifully.
Time shifting plays a huge role in this book, but unlike previous stories, it was extremely easy to follow.  It really added a level of complexity that lead to a brilliant story.  When Cassie was in Paris in the 1700's, the background scenery was so graphically described, that as a reader, it felt as though I was on the journey with her. This book also tied up some time traveling issues that were difficult to follow in the first two books.
I really felt that in Embrace the Night, that Chance really came into her own and showed us what a masterful story teller that she is.  It is really hard to talk about this book simply because I don't want to give anyone any spoilers. I simply just did not expect the elements of the story to be tied together so neatly.  This of course raises the question of what is left for the next book in the series?  I guess I will just have to read it to find out.
In terms of social justice issues, exclusion, exclusion and yet more exclusion.  I think by now that we have pretty much become accustomed to the fact that this is standard operating procedure for urban fantasy.  Of course I would have liked to see more historically marginalized people and pointing out the forced slavery of mythical creatures certainly does not cut it as far as I am concerned, especially because people of the African Diaspora were enslaved.  I do however come down on the side that if an author cannot pull off inclusion properly, I would rather be erased.
There are two books that two midgrade books that one must read to arrive at Embrace the Night, which is a shame, but I will say that it was worth it.  This is the kind of book that you stay up late at night to finish, knowing that you will be exhausted the next day.  It is an absolute page turner.