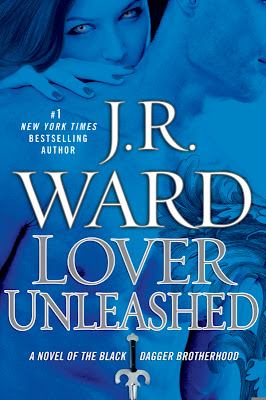 In the last book, Lover Mine, we saw Payne, daughter of the Scribe Virgin, twin of Vishous, be badly injured in her sparring match with Wrath. With a severe spinal injury she needs desperate help and soon – enter Manuel Manello (I was going to say something about the name but then I remembered Vishous, Rhage, Phury and the unpronouceable Xhex and decided against it), a surgeon who used to work with Dr. Jane, Vishous’ partner.
Of course, Manuel meets Payne and and the twu love begins. But Payne needs to adapt to the world after centuries being imprisoned by the Scribe Virgin as well as loving a man for the first time. And then her heritage kicks in – and she has her powers as a child of the Scribe Virgin to also adapt to. To complicate matters, Xcor, son of the Bloodletter, has travelled from Europe to the US – seeking to destabilise Wrath and hunting Payne, the woman who killed the Bloodletter.
Meanwhile Manuel has his world opened up to the existence of the vampires and the lessers and has to deal with the fallout of the Brother’s altering his memory while he does his best to remember Payne.
On top of that, we have the lessers are continuing the new tactic of mass conversions – for the first time the Brother’s face literal armies of lessers arrayed against them – and with that the injury rate sky rockets.
At the same time Vishous finally comes to terms with his past, how that has affected his relationship with Dr.Jane and the huge issues that have been raised that he has never dealt with or worked through.
In this book we returned to having a large number of side plots running at the same time – but it was pretty well balanced; too much focus on Payne and Manuel would have been rather dull with relatively little plot between them, beyond, of course, either lots of sex or some extra convoluted make-plot. So, the side-plots I was generally happy to see. I look forward to seeing more from Xcor and the lessers, both of which promise for some major plot and world development with
Ok, I’m not sure why Xcor wants to take down the king or why, given the prejudices of the glymeria, he thinks he could replace him. Nor do I think that the Omega’s new tactic of mass conversion is even remotely sensible given the Dhestroyer prophecy – it doesn’t make a lot of sense. But neither of them are especially world or story breaking – and both can be explained away.
Similarly, I quite like Vishous and Jane’s story in this book. I’m not a great fan of angst and all of this angst being dug up isn’t a huge amount of entertaining to me. I also think the idea of BDSM used for therapy is all kinds of fraught – it adds into the idea that BDSM aficionados aren’t into it for fun, fulfilment or pleasure – they’re doing it because they’re hurt and damaged. I dislike it – and I also dislike the idea that this is a good idea for Vishous to get through his issues is to getting himself beaten and broken rather than speak to their in-house therapist.
Despite my problems with the plot and my general non-enjoyment with angst and relationship dramas, it was fairly well done and, more importantly, it made it clear that Vishous falling in love with Jane in Lover Unbound didn’t mean all his problems were magically solved! I love seeing that trope subverted. True love is wonderful, but it doesn’t heal all.
Unfortunately, we do have some magical sex healing. Yes, I thought we were going to see another strong disabled character in the series (Wrath is a great character but after becoming completely blind he has increasingly taken a back seat) but no, her broken spine was healed with magical orgasm. Yes, healing sex – part of her heritage as a daughter of the Scribe Virgin (yes, the Virgin goddess gives you sex healing powers… don’t even try to make sense of that).
And while we’re on things that give me headaches let’s discuss the romance between Manny and Payne. It’s so classically, utterly Black Dagger Dudebro. Let us take the first moment Dr. Manuel Manello meets Payne. She’s in extreme pain and she’s lying on a bed with Manny being her best hope to ever walk again. Manny hasn’t spoken a word to her, doesn’t even know her name, just knows he’s a doctor to heal her. And Manny, what does he think?

It finally happened, he thought as he burrowed under his shirt and took hold of his heavy cross. All his life he’d wondered why he’d never fallen in love, and now he knew. He’d been waiting for this moment, this woman, this time. The female is mine, he thought.

Oooookay then Doctor, please step away from the patient. When she wakes up she is, obviously, grateful and asks what he can do for her – he asks whether she’s single and then asks for a kiss. Ye gods, someone page the ethics committee! She tells him she has never been with a man before ever to which he promptly takes a deep breath and struggles not to spontaneously orgasm. Seriously, the word “virgin” makes this man orgasm. Isn't that taking premature ejaculation a little far? At this point it’s nigh impossible for this relationship to be saved in my eyes.

We then have an ongoing enshrinement of this virginity, with Manuel not having penetrative sex with Payne even though he wants to and even though Payne definitely wants it because it won't be special enough. Note, the specialness of Payne losing her virginity is Manny's to decide not her. Hey, manny, Forks is that way, tell the Cullen's I said hi.
And while we’re discussing Payne being badly injured and this stressful time, I have to mention what has become an ongoing theme in these books: a woman is terrible abused, injured, raped, kidnapped etc etc – what do we do? We focus in on her menfolk to see how it makes them feel. Last book it was blatant with John Matthew’s pain over Xhex’s rape and in this book we spend far far FAR more time with Vishous’s worry and stress than we do Payne’s. It’s not that we shouldn’t see their pain – the worry and stress of a family member watching their loved ones go into surgery is no small thing – but from book 1 the men’s pain on behalf of their women has always been more centre-stage than the women’s own pain.
Oh, and just in case you thought Payne was getting ahead of herself being a strong, powerful woman, she was kidnapped. Seriously. It didn’t even add anything to the plotline. It was just a random kidnapping. I think it had to happen so Payne didn’t feel left out with the other women in the household. I think it may be a rite of passager for young female vampires everywhere, their first kidnapping!
A last note on Qhuinn, Blaylock and Saxon’s storyline: angst angst, moan moan, woe woe, fade to black before the straight readers see anything that might hurt their precious eyes, return to graphic sex between Manuel and Payne.
All in all, this book was a step up from Lover Mine… but that’s not saying a whole lot. The book was nearly entirely focused on grief and angst with odd sex holidays. Quinn’s angst, Payne’s angst, Manuel’s angst, Vishous’s angst and Jane’s angst. The odd breaks for hints of plot only heightened how the rest of it was full of big heavy emotions. As far as emotional angst goes, it wasn’t awful but I found it hard work and not great fun.