Review: Heart of Steel by Meljean Brook, Book 2 of the Iron Seas series 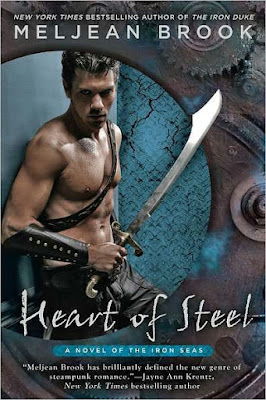 Yasmeen Corsair is an airship captain, unfettered, unruled, she travels the world making profits off her cargos and occasionally chucking men overboard for being silly fools. Most recently she kicked off Archimedes Fox over zombie infested Venice –but, to be fair, she did make sure he fell in a canal to give him a sporting chance. If he lived she’d even give him  part of the profits from the sale of the Da Vinci sketch he found.

But then things got complicated – starting with the destruction of her airship and the slaughter of her crew. Captain Corsair is not one to take either insult easily, fiercely loyal, she is determined to avenge them. And since they also stole the sketch, Archimedes is determined to get that back too so he can pay his debts and avoid those pesky assassins.

Of course, he has an ulterior motive, and that is to work his way into the iron heart of Captain Corsair; she’s already impressed by his silver tongue and iron balls, but he does hope for more and is determined to woo her. While she’s quite happy to be wooed – and more if she can wrangle it.
On their quest for revenge they find themselves embroiled deeply in politics, as the Horde faces growing rebellions and forces from the New World seek to return back across the ocean, they find their revenge is not so simple, or so free from political machinations and much greater forces are afoot.

After the last book, I was somewhat concerned about the romance between Archimedes and Yasmeen – but never could 2 romances be more different. Yasmeen is sexual – eager and happily so. In fact, it is Archimedes that holds out for love. There is never any pushing past reluctance, no refusals that are ignored, no reluctant woman dragged virtually kicking and screaming into a relationship. In fact, the one man who does try to rape Yasmeen ends up with his neck broken.

Archimedes and Yasmeen bounce off each other extremely well, they’re funny, they’re witty and they’re pure fun as well. They take things as seriously as they require but are always ready to have a laugh about it as well – and rarely do I find two characters who are willing to so unabashedly enjoy themselves. They spar with each other beautifully but if there is ever a dominant partner in this relationship, it is ever and always Yasmeen. Yasmeen never needs rescuing, she never needs saving, she never needs protecting. In fact, it is Yasmeen who saves Archimedes on several occasions. There is never any doubt who is the stronger and more dangerous of the two and Yasmeen remains very firmly in charge.


Yasmeen herself is a strong character above and beyond her ability to kick arse (super powers do not a strong character make after all). She’s determined, she’s driven to get what she wants, she has focused and clear goals. She doesn’t bow to people’s rules casually – but at the same time understands when rules have to be there and doesn’t break them for the sake of it – even when she doesn’t agree with them. She is strong and powerful and independent without needing to be defiant, rebellious, filled with temper and lashing out. She sets her own course but is not foolish or silly about it nor does she just discard the world and people around her to suit herself.

The world is, if anything, even richer than previously seen. We’re given a lot of insight into the New World nations (albeit somewhat confusing because of the amount of information and places introduced so quickly, but it’s sufficiently clear and avoids the dreadful infodumping so many stories fall pretty to) as well as a clearer picture of the state of the Old World, the various territories and zombie infested areas. We also get a greater insight into the Horde, see them as more than this foreign, evil, insidious menace and more rounded and complete picture of them. I love how this world has the recognizable roots in ours but has changed so much.

The story itself is swashbuckling fun at its best. Airships, zombies, hunting for long lost treasure in foreign locales, intrigue, poison, assassins, plots and conspiracies and enough twists to keep things interesting without getting us completely lost. We have no cartoon villains, lots of powerfully built characters and, above all, just so much fun.

We also have many different POC in the story, with their own roots, cultures and goals and for more than just tokenism. Even in the references to the New World, which are only touched on, we’re aware of the POC presence there. We continue to have references to Scarsdale, the gay man from the last book and, sadly, never really in a way that makes the portrayal of the last book redeemable.

All in all, this book takes the great world of the last book, doubles up on the swashbuckling and leaves most of the fail behind making it immense fun and a wonderful read.