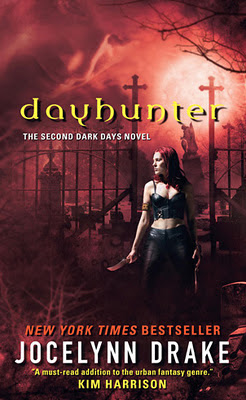 Now that it is absolutely clear that the naturi intend to break the seal and release their queen, Mira is placed into a situation in which she must choose who to be loyal to. If that were not enough, the threat of  an inter species war looms over head.  Mira is being manipulated from all sides.  The fact that she was made a first blood by three different vampires means that at any time, the ancients may use her for their own purposes.  Each of the ancients has a different plan of attack, which makes Mira the ultimate pawn.
As in Nightwalker, Mira continues to suffer from PTSD.  Since this book was far more action packed however, there was less time for Mira to have any kind of self reflection.  It would seem to me that because she kept having to deal with the group that originally threatened her life and caused the PTSD that should have resulted in an increase of her PTSD response, rather than a reduction. In many ways, it felt like Mira was too busy to be triggered.
The Dark Days series continues to travel swiftly from location to location, and Drake takes care to give us a strong sense of each location with extremely will written descriptive language.  From the smell of the air in Crete, to the food in Venice, Drake gives the reader a rich sense of culture, while reminding us that we are dealing with creatures who have experienced these locations and watched them change over centuries.
Despite all who have the ability to control her, Mira continues to retain a strong sense of self. Quitting, or even compromising her morals, for the chance to save her life, is not an option she is willing to consider.  Along the way, she becomes responsible for the life and well being of several characters, though she had previously sworn that she did not want a family.  Mira becomes responsible for a vampire and a werewolf who are both male.  Tristan is almost childlike which turns Mira into a maternal figure for him.  This maternal construction is further emboldened by the continued reminder that Tristan is incapable of defending himself.  In terms of gender, Tristan's role is the one often fulfilled by women and so to some degree the reversal of gender roles is appealing it does however fall short because of the fact that Mira's power is then turned maternal. It reifies the notion that despite thoughts to the contrary, that all women want to mother.
For all of the strength that Mira displays in Dayhunter, the fact that she continually makes ridiculous decisions, in the great tradition of spunky agency is truly grating. Really, don't we already have enough female protagonists in the urban fantasy genre, with an addiction to spunky agency?  This was made even more frustrating because Mira always noted after the fact that her actions were ridiculous, but that didn't stop her from making a snap decision the very next time an opportunity arose.  I don't want a protagonist who's a Mary Sue, but there has to be something in between Mary Sue and Spunky agency.
The relationship between Mira and Danus continues to grow.  It started on the basis of the enemy of my enemy is my friend, but somewhere along the line this shifts.  Danus is just as manipulative as the Ancients in my mind.  He forces himself uninvited into Mira's brain, and this represents a lack of respect for her bodily integrity, and still yet she trusts him.  He kills a vampire in front of her eyes because he does not trust her not to kill them, and still yet she trusts him.  At this point, he has not differentiated himself from the Ancients and yet, he is the person she wants at her back.  Danus reflects just another of Mira's bad choices at this time.
Dayhunter is 241 pages long and so is a relatively short book, yet it was absolutely ponderous to read.  At times it was scattered and the intrigue was pointless and contrived.  Throughout the novel, we were promised a huge battle, but it ended in the most anticlimactic way possible.  It is the equivalent of reneging on a promise.  Dayhunter actively killed much of the interest that I have in the series, and it is a real shame, because Drake has built such a large world.