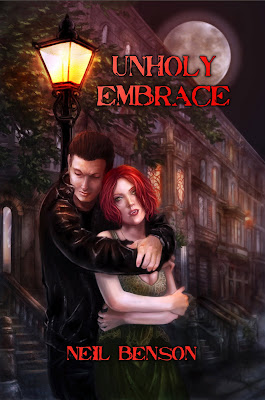 Frank is an architect and an artist who sees the most beautiful woman he has ever seen in a club one night. And from then on his world is completely changed by this beautiful, powerful, mysterious and alluring vampire.

Nessa has lived for centuries and travelled across Europe to the United States from her native Hungary. She has watched and participated a great deal of history, she has met great men, she has appreciated art and earned fortunes, she has loved and she has lost – but she has always lived on the very fringed of mortal society. Constantly having to reinvent herself when she grows too old, never getting too close to mortals for fear of them discovering her secret. It has been a long life, a fascinating life – but a lonely one.

But now it is one she shares with Frank as love blooms most unexpectedly. Now she must learn to live with a mortal and share her life she has been used to controlling and he has to learn to love a woman that much more powerful and wise than him. And on top of that, Nessa’s old enemy still stalks all she loves.

And there is a demon in the city. A demon and its minions that are killing people and that the mortals cannot possibly stop. Nessa is driven to hunt it and defeat it for the sake of humanity – but the demon turns its eyes on Frank in retaliation

On the whole I appreciated several unique elements of this book. I liked its style though that could be a personal preference. The book gives me a strong sense that it was being read aloud to me rather than written. It was wonderfully crafted and showed a definite writing prowess that I imagine is hard to imitate. It managed to make the characters both well and intimately described yet still distant and managed to include large amounts of information without the usual convoluted info-dumping sense we know and loathe. It actually reminded me a great deal of Interview with a Vampire, with that sense of a story being recounted rather than read as it happened but managed to do so with a shifting point of view as well.

The style also allowed it to be rich in information about the world, full of exposition and extrapolation without being either dull or unrealistic, especially about Nessa’s history and the beings they shared the world with.

Diversitywise, this book follows 2 characters – Nessa and Frank, any other characters are complete walk on, some of which are POC, none spending a large amount of time centre stage. We do have a visit from Frank’s lesbian sister, Marianne – but it’s not exactly ideal. Nessa recognises her as a lesbian from the very beginning by her “mannish mannerisms and her minimal use of makeup and jewellery” and of course she flirts with her by being “submissive” to Marianne’s alpha female. It’s depressing that these narrow stereotypes arise even with such brief, cameo appearances

While I generally liked it the plot and writing, there was a major problem with grossly extraneous scenes. There are some scenes in the book that while strictly unnecessary, still add to the characterisation and feel of the story – like Nessa’s recitation of her history for one which was rich and added so much life to her as a character. But then there are other scenes which just add nothing to the plot – the aforementioned visit from Frank’s sister. Frank going to an acupuncturist with his bruised shoulder. At this point I’m not complaining about Chekov’s gun, I’m stumbling around Chekov’s junk shop, tripping over things and banging my head on stuff dangling from the ceiling.

I’m not saying these scenes are inherently boring or badly written – but they’re just unnecessary – and the number of them makes this book rather meander around the plot. Which isn’t the best tone for hunting down a demon that is killing people. I think if this book had been more an exploration of Nessa and Frank learning about Nessa and growing to know Nessa – i.e. a romance without the murder mystery – then the pacing and plot would have been much better suited.

Which also brings up a problem with the “necessary” scenes - which just seem unnecessary because the goals within them are so easily achieved. We have a scene where Nessa buys a silver dagger from some illegal artefact dealers. And that’s the scene – that isn’t just the summation of the scene, that’s the entirety of the scene. There are no hoops to jump through, no bullets to dodge, no red herrings to chase down – it’s just a long description of what turns out to be a relatively simple process. Frank even acquires an antique werewolf killing shotgun and silver shells by asking and being given them.

The sad thing with this is that once Nessa has found the demon, her long described preparations can just be summed up as “Nessa completes shopping list, really loves ebay, and is all ready.” Ok, so she doesn’t ebay the items, but she has as little difficulty acquiring them as that. If you are going on an epic quest to hunt down and destroy a demon that could kills hundreds of people and is far beyond you in power, the three powerful tools used to subdue it should involve more than “hey mate, can I borrow that shiny?” “Sure,” “Cool, I owe you one, bro.” That’s not to say that every scene needs to be an epic struggle, but if so many of these scenes are a simple case of “ask and ye shall receive” then do we really need a detailed accounting of each one.

Which brings me to the ending. The ending was very sadly anti-climactic. A big epic confrontation and it was over so simply, so quickly and, to be honest, rather convolutedly, somewhat relying on Frank just happening to own the Holy Hand-grenade and having it lying around.

I did like the interactions between Nessa and Frank, her unabashed dominance, her leadership, control and power in a genre which so often has the supernatural man and the human woman following behind. I liked his assertions of autonomy but still acceptance of a secondary state and I definitely liked Nessa both taking control but at the same time demanding he accept responsibility for his own actions and choices, refusing to accept by even the slightest implication that her sexiness is controlling him or removing his choice. She reminds him repeatedly that it was his choice to come sit by her, no matter how sexually provocative she is and his choice to follow her home, no matter how desirable she is, and even his self-control to settle his erection in public, no matter how attractive she is.

Nessa is a powerful figure, she is protective of Frank to a level that can be overbearing but never without cause and while Frank has his moments of spunky agency to resist that control, his tantrums are more about her keeping him in the dark than about him being unable to take the lead.

I think it shifted the scene we’ve seen so often in Urban Fantasy, the Spunky Agency human woman with the dominating, controlling Hauptman supernatural boyfriend. It’s a refreshing change

But it wasn’t a book without issues and overall it needed a strong injection of excitement, conflict, actual goals achieved and problems overcome. As it is, it’s like a beautifully crafted painting, when what you want is a movie. It needed spark and if it had that it would be beyond a good book and be a truly excellent one.

Editors Note: A copy of this book was provided for review by the author
Posted by Sparky at 3:00 PM