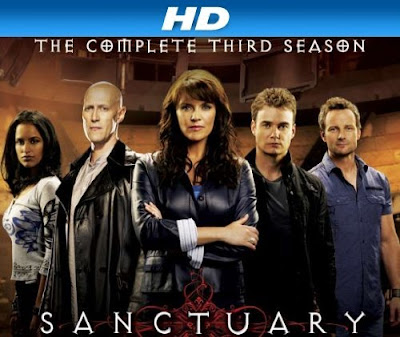 Season Three opens with the continuation of the Big Bertha/ Kali storyline.  As I mentioned in my review of season two, I am not at all pleased with the appropriation of the Hindu religion for the purposes of a plot point.  Season three had 20 episodes and is the longest season to date.  Much of this season is dedicated to the introduction to Hollow Earth - a large city in the center of earth inhabited by an extremely technologically advanced race.

The new big bad this season is Adam Worth who might recognize and Dr. Jekyll and Mr Hyde. I suppose the best way to describe him is as the sixth wheel to the big five.  Worth was originally believed to be killed by Magnus and Druitt. If you have been following this series from the beginning, you will note that with the introduction of Worth we now have two characters who neurologically atypical and both of them are violent and criminals.  The fact that disability only appears in a manner that is dangerous is absolutely ableist.  Despite the common myth of the violent neurologically atypical person, the truth of the matter is that they are far more likely to be a danger to themselves than another person.  They could have kept the Dr. Jekyll/Mr.Hyde phenomenon as a product of an experiment gone wrong but instead they chose to construct him as unstable due to his mental functions.

A lot of this story continues to revolve around Will and Magnus but in rare moments we begin to see a bit more of Kate.  The problem is that a lot of time is spent reminding us that Kate has a bad girl past.  In Bank Job, the third episode of this season, Kate stages a fake bank robbery to cover for the teams attempt to secure an immortal hiding in the bank. It is constantly framed that Kate is reforming her ways thanks to her association with Magnus.  She is now on the path to good under Magnus' tutelage which of course fulfills the trope of Magnus as great earth mother who saves abnormals and brown people.


At the end of last season we met Ravi.  He ran the sanctuary in Mumbai India.  I thought that at the end of the of the Big Bertha/Kali saga that we had seen the last of Ravi simply because Sanctuary has a tendency to let characters of colour ride into the sunset but it seems that the writers had a more auspices ending for Ravi.  In Carentan France, Ravi travels to investigate suspicious disappearances, only to disappear himself.  He accidentally stumbled into a time distortion bubble where the course of a 24 hour period actually registered as six years. Of course, Will and Magnus come rushing to the rescue.  Despite working on a solution for the equivalent of years inside the bubble, Ravi is unable to come up with a solution, but Magnus of course stumbles on one rapidly.  I know, I know score yet another one for the White earth mother, on the backs of people of colour.  If that were not enough when they discover that the people born inside the bubble would cease to exist if they attempted to stop the bubble from growing the citizens of Carentan revolt, causing Ravi to sacrifice his life to save Will. Ravi went from a powerful, knowledgeable doctor to a sacrificial lamb to save a White man.  If I were Kate, I would be worried.

My favourite character on this show has long been Nickolah Tesla.  He is arrogant to a fault, but fun.  This season though he made few appearances his arrogance became intolerable because of the addition of misogyny.  This reached a high point in episode sixteen when Magnus and Tesla a former Praxian stronghold in East Africa and discover a queen vampire in stasis. In order to save Tesla's life, Magnus takes a sample of blood from the Queen and injects it into Tesla.  I was momentarily excited because this gave the might Tesla back his vampire powers.  Unfortunately, the queen was not entranced with Tesla and set about her own plan to resurrect the vampire race.  This lead to Tesla referring to her repeatedly as a bitch. On two separate occasions we saw Tesla attempt to resurrect vampires but when a woman attempted to do so without his involvement, suddenly she was a bitch. There was absolutely no reason to go down this road because it is perfectly possible for be an arrogant ass, without having him resort to sexism.

There are times when I really like this show but it is becoming increasingly hard to over look its treatment of the disabled and people of colour.  The cast is also still incredibly straight.  When they decide to re-work history in episode 17, in order to insert Druitt, Magnus, Tesla, Watson and Griffin into the events regarding D Day, it was incredibly offensive.  So many died on those beaches that day and this kind of revisionist history dishonours not only their memories, but their sacrifice.  I am fine with the constant claims of Magnus having a relationship with historical figures but I am not fine with re-writing history in this manner.

The concept of  hollow earth while scientifically impossible is absolutely interesting.  It increases the tensions between abnormals and normals and lends credence to the idea that Sanctuary is actually taking place in an alternate universe.  One of the things I really like about this show is that one can never guess what is coming next and they take great care to ensure that the meta plot is always active even when they are doing an episode of abnormal of the week.  At this point, Sanctuary's fails have not become more overwhelming than the positives; however, they are very close to the line.