Review of Watcher by Roh Morgon Book 1 of The Chosen 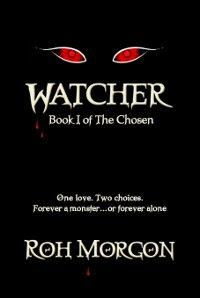 Watcher is a typical vampire paranormal romance book.  As I have said on several occasions, paranormal romance is not a genre that I am fond of, so please keep that in mind when reading this review. Watcher is the first person account of Sunny Martin, and unfortunately the voice that this novel is written in makes it difficult to enjoy for the first few hundred pages.  The novel itself feels tedious, even as we learn that Sunny became one of the Chosen against her will, and still watches over her human daughter and granddaughter.  Nicholas, her lover, expounds upon his feelings about her metamorphosis by writing in his journal:

Her story of her Change, of her rape into our way of life, enraged me to the point that I cold scarcely maintain my composure.  I did not want to frighten her with the monster that I can become, and that fear helped me stay in control. (pg89)

I completely understand why Morgon made this analogy, but that does not make it anymore acceptable.  Nothing is like rape but rape, and using this term to describe supernatural events that would never be possible in the real world, diminishes the harm done to rape victims.

The story shifts back and forth between Sunny -- who desperately wants to maintain her human side and independence, and Nicholas, a Chosen (read: vampire) of over 500 years -- who wants nothing more than to bond with her and make her his mate.  Sunny is originally drawn in because Nicholas is the very first of her kind that she has met, since being abandoned by her maker. Over the course of two months, they meet and fall in love.  I have a problem with the time length.  At best, two months equals a pretty heavy infatuation and even lust, but it most certainly does not equal love.  We are never even really given a reason for the basis of their enthrallment, which while irritating -- is extremely typical for paranormal romance.


As with many books in this genre, the Chosen is very heterosexist.  There isn't a single gay character, and though the Chosen may feed off of humans of either sex, for the majority of the feedings that occur in the book, they are in opposite sex pairings. The Chosen is further extremely White with people of colour mentioned in passing.  Though class is never directly discussed, there was most certainly is an undercurrent of classism.  Sunny at first makes her living working as a bartender, and though Nicholas makes it clear that he finds all humans to be beneath him, he seems to reserve a special kind of distaste for those humans in the working class bar.

As a partner, Nicholas is controlling and over bearing and very much embodies the Hauptman effect.   He continually attempts to manipulate Sunny, and justify his behaviour by using his love for her.  It is a classic tactic employed by abusers.  Each time he manipulates her and she makes her escape, he promises to change and expresses remorse.  At one point, he nearly kills her and though he expresses guilt and shame, the fact that Sunny does as well is troubling  She is not oblivious to his controlling nature, in the way that Bella Swan from Twilight is, but the fact that she largely follows along, doesn't completely mesh with her supposed independent nature.  At several occasions, she questions whether or not she is being manipulated, and is even hyper aware of Nicholas' need to be in control of everything and everyone around him, and yet she continues to push down her doubts -- virtually losing herself in this man.

Watcher is over four hundred pages long and I really feel as though the story was too long.  It didn't really start to get interesting until I was almost 200 pages in.  I came very close to giving this book a DNF rating.  Instead of making it easier to connect to the protagonist, the first person position in which this story was told, made it seem to just drag slowly forward.  I will however say that when I finally got into the story, it was interesting, despite the fact that it was basically about a woman and her abusive lover.