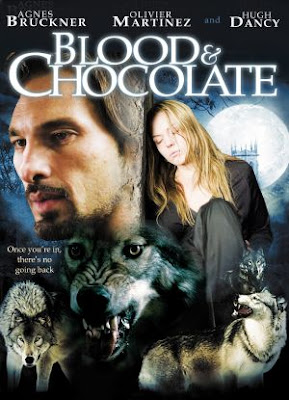 Blood and Chocolate was released in 2007 and stars Agnes Bruckner, Hugh Dancy and Olivier Martinez.  The movie is supposedly based upon a book by the same name written by  Annette Curtis Klause.  Having never read the book, I cannot comment on how closely the book follows the movie.
The film opens in the U.S. with Vivian being the only member of her family who survives and attack by hunters.  It shifts to modern day Bucharest, Romania where the now young adult Vivian is living with her aunt Astrid.   Vivian is a member of a pack of ancient werewolves, who have a long history of malice against humans. Gabriel the leader of the pack believes that Vivian is the prophesied one, the one that will bring great change to their world, and as such he plans to take her for his wife for seven years - the length of time that the alpha wolf mates.
Enter Aiden, a graphic artist who is enchanted with Vivian from the first moment that he sees her.  Conveniently he is researching werewolf lore and Vivian just happens to know so much about it.  Vivian does warn him that her family will not approve of their match, but he continues to chase after her.  Nothing like a little Romeo and Juliet.
Despite the fact that this story is largely based around a youth romance, it does not fall prey to a lot of angst, though the love relationship between Aiden and Vivian develops too fast for me to believe that it is love rather than infatuation.  There is enormous social pressure of Vivian to submit to the expectations of her and she is highly resistant. When challenged by her cousin Rafe, she makes it clear that she will not dance for Gabriel and that she does not think that it is an honour to be chosen and discarded at will. However, it is only when Aiden clearly becomes targeted by the pack, that she makes a complete separation and chooses love over them.
Okay, we have a strong female lead so what's not to like?  Well, once again we have a White female set up as the strong heroine without a person of colour to be seen. They're in Romania and yet we are to believe that there are no Roma?  There are also no GLBT characters and the boy meets girl framework reinforces that true love, as long as it is occurring between to het people saves the day.  Hetlandia 1000 - GLBT representation 0.
The special effects were fairly minor in this film.  A warm fuzzy light was used to indicate a shift from human to werewolf.  The stunts were fairly basic and mostly amounted to long jumps or climbs that were of course treacherous but not eye catching. When the wolves finally made their appearance on screen, they were every day average wolves.  Considering that this movie was released in 2007, rather than say the 80's, I do think they could have paid a little more attention to special effects.
Blood and Chocolate didn't put me to sleep, but it didn't excite me either, and that is with taking into consideration the change of have a female character be the chosen one.  I did like the focus on werewolf culture, and I found it a refreshing break from the continual focus on vampires.  I further loved that the typical oppressive, controlling behaviour of werewolves that is normalized and cast as acceptable because they are werewolves, is something that was reduced in this film.  I can only say reduced because it is troubling that Rafe was not held accountable for killing a woman who dared to reject him sexually but met his death at the hands of Aidan after a plan to scare him out of town backfired.
In the end Blood and Chocolate suffers from everything it could have been, had the directors and the writers pushed the envelope just a touch.