Review: An Artifical Night by Seanan Mcguire, book 3 of the October Daye Series 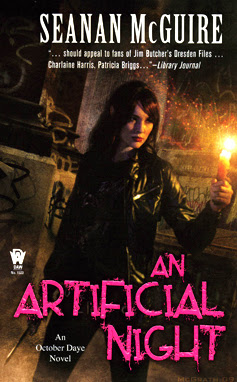 The Hunt is riding again. His hunt rides forth every 100 years and before it does it gathers new riders and steeds into the fold. But the source for these new recruits are children – fae children to ride, mortal children for horses and the nights before Samhain Michael recruits new steeds and riders from their homes.

And in comes October Daye. Her best friends have lost their children, the Court of Cats have lost children and her friend Quentin has lost his girlfriend to the Hunt and October, as a hero, isn’t going to let that happen. Even if her Fetch has arrived, predicting her imminent demise.

With the help of Luna, the Duchess of the Shadowed Halls and the ancient fae, the Luidaeg, she has to enter the lands of the hunt and retrieve the children. But she is entering a new world with this quest, playing by the rules of children’s games and songs, fighting with rhymes and half remembered rules of fairness in a world that isn’t bound to reality.

And, of course, even if you manage to save people from the Huntsman, how do you stop him turning his eyes upon you?

I think in this book we had the most powerful feeling of what it means to be fae –not just in the series but perhaps in Urban Fantasy in general. The surreal, malleable world, the shifting reality and the low grade3, unnerving terror was powerful. But more so was the simple use of children’s stories, of fairness and of arcane rules to the games. It added to the surreality and the alienness of the world, even told through the familiarity of children’s rhymes. In a way it adds to the terror of it – because these aren’t creatures that follow the rules and mores of adult society – not even of adult thinking – they are literally creatures of nightmares and as alien and incomprehensible as those nightmares.

This links with the huge richness of the world here to make something which is both epic and wondrous with lots of shinies and lots of surreal terrors.

The plot has an interesting element in that you think it’s solved and then realise – wait, I’m only half way through. And then we’d have a new chapter, a new start, a new twist. And then you think it’s resolved a second time, but again there’s a new chapter, a new twist to the tale. In other books I’ve found that irritating – but largely because there hasn’t been enough coherence between the stages. In this book each section of the tale naturally leads into the next. I also like it because we’re very much reading things through an almost fairy tale lens – and fairy tales end far too neatly with their “happy ever after”. Each “ending” would have been a great fairy tale ending – and then they all lived happily ever after, but what about the consequences? Does the story really end there? Are there no loose ends? So I quite liked it, I felt it was  rejection of the simple, pat ending.

In the previous books, it felt like Toby was constantly being dragged into other people’s problems that she wanted no part in. First by Winterose’s curse and then by the orders of Sylvester, the previous 2 books showed Toby reluctantly engage the plot at the demands of others. This book changes that a lot – Toby sees an evil threatening her loved ones and moves in. And then she just sees an evil that is intolerable to her and decides to step up because she is a good person – a damned hero – and refuses to let this pass. I think there;s an important distinction here – the difference between helping others (and protecting/championing others is pretty much a necessity when it comes to heroes) because she is forced versus her choosing to help others because she’s a hero. There’s a big difference in agency and made Toby a much stronger character, I think, even though she was heroic in all 3 books.

Relatedly, Toby is a much stronger, more active participant in this book. She isn’t being constantly injured and recovering (though she is injured) nor is she flailing around without seeming to know what to do next and letting events happen. She’s more active, she’s leading the plot, she’s directing the plot and she’s resolving the plot very much on her terms.

While the series continues to have a myriad of different fae, it is far less diverse from a human perspective. Straight, white etc seem to be the norm, I can’t recall any major shifts from this. I can’t say I’m perfect at remembering every side-character’s description, but I look out for diversity and if I can’t remember it there’s a pretty good chance that it wasn’t there. We have a dead Kitsune who was Japanese, but the only live Kitsune is white (for story reasons, but it does mean we don’t have any POC, even of fae that come from POC myths, legends and traditions).