Review of Blood Cross by Faith Hunter: Book 2 of the Jane Yellowrock Series 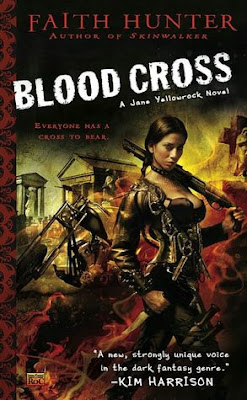 Blood Cross is the second book in the Jane Yellowrock series.  When we last left Jane, though she had saved the day, Leo, the master of the New Orleans was not pleased, believing that she had killed his son, rather than killing the killer of his son.  In Blood Cross, Jane must hunt a dangerous rogue who is creating vampires and killing witches.

Beast is still pushing Jane and we learn that any maternal feelings Jane has actually belong to beast who refers to children as kits.  I really like this division as socially it is falsely constructed that all women love children and feel protective and loving around them.  Beast also wants to mate, and Jane is worried that the closer they get to the new moon, the more likely that Beast will choose one from her two suitors.  I love that Beast showed no shame in her sexual desires, though did find it problematic that this suggested mated was meant to be a sort of completion of Jane.

Jane herself is a wonderfully strong character. She's driven, arse kicking, completely lacking in spunky agency, capable of looking after herself but not ridiculously over perfect. She has doubts and concerns but she is never weak with them. She sets her own agenda, and covers it in a lovely lashing of snark and defiance that never drops into ridiculous Keillie Independence. About the only thing I didn't like over much beyond the mated=completion was the age-old trope of the protagonist blaming themselves for things that are not their fault and beyond their control.

In this novel we are introduced to our first gay token however he has no role beyond a 2 second reference. His name is Deon and he is the new cook over at Katies.

On the monitor, I watched Deon, who was slight of form, about five-seven, and gayer than a nineteen fifties chorus-line dancer, as he washed his hands before tackling sushi. (pg 173)

We don't anything about him beyond that fact that he is gay and chef. The rest of the novel is largely spent on heterosexual and cisgender characters; however, there is still plenty of appropriation going on:

Bliss was still in the witch closet (or maybe she didn't know she was a witch?) and any mention of magic use made her uncomfortable. (pg 60-61)

This is but one instance of many in which Hunter uses terms like coming out, or closeted to talk about a supernatural creature revealing its identity publicly.  This language is appropriation and does not consider the harm that the phenomenon of the closet causes to GLBT people.

Hunter also through in some transphobia for fun:


When the armed officer finally waved me through, he had to shout directions over a loud confrontation at the front door. A multipierced cross-dresser in a skintight purplesequined evening gown - and nothing else - had started screaming about his right to go to the ladies' room, despite the clear evidence of male dangly bits jiggling against the purple dress.  Thanks to her - his? - histrionics, I was able to hand off my cell and camera to myself and not set off the metal detector as I scoot through. (pg 65-66)

I was particularly disturbed by the above passage.  Trans people are currently struggling for the right to be able to use the bathroom to which they identify and that entire passage plays upon the men in dresses/predator role that has been constructed to deny trans people their legal rights. There is also the issue of her use of the derogatory she/he.  If Hunter could not identify the gender in question she should have used a pronoun like s/he or hir, or ze; however, in this particular example we know that the woman in person was dressed in female garb and therefore the correct pronoun should have been she. This entire passage was cissexism personified.

One of things I loved about this story to begin with was having a protagonist of colour. In this second book Jane learns more about her culture by going to a sweat lodge and going to water.  She is not just native in name only as so often happens when we have a protagonist of colour. We continue to learn more and mroe about Jane, her past and her heritage. I'm not expert on Cherokee history so I have no idea how realistic the portrayal is, but it does seem like there has been a genuine, strong effort to get this character and this knwoledge as right as possible - there has been some very good research here or the author has some very good personal knowledge. It's refreshing and a wonderful change from what we're used to.

Unfortunately, this does not mean that other races get the same sort of respectful treatment. Hunter engages in a trope that we have nicknamed Blackety Black Black:

Do you get it? Bethany is Black, no really SHE IS BLACK.  Bethany also has the distinction of being a witch/vamp.  It seems that Blacks were specifically bred to encourage the witch gene during slavery.  In Blood Cross, we also learn that the Haitian revolution involved not only human Black slaves revolting but Black vampires who were also enslaved. François-Dominique Toussaint Louverture, the leader of the Haitian revolution as it turns out was also a vampire.  I don't appreciate the appropriation of this history for a plot point, it is inappropriate and makes light of a struggle that went on for years. To this day, Haitians are still suffering because they dared to fight to overthrow their oppressors and become the first slave free nation in the western hemisphere. Beyond this, we only had a few more secondary POC characters

As a story, Blood Cross moved quickly and engaged in more world building. My main plot criticism of the first book was that it was slow - the pacing was dragging and we tended to spend a lot of tiem not doing much. In this book, while Jane is, perhaps, more reactive  than I prefer but still manages to drive the plot admirablyand withotu the navel gazing or flailing that dragged down the first book. The world building is also immense - the history of the vampires, the way they came to be, how that explains their weaknesses, even the plotting of vampire politics is just incredible. I don't think I've read any series that explains the WHY of their vampires as well as this one does and it's rare to have this much information in a world that is (so far) limited to do few supernatural creatures (though with strong hints of more to come).

It looks like Big Cat finally has a partner to share her life with and she is planting roots in New Orleans.  I am fascinated to see how she changes as she learns more about her personal history and to depend on others.  The isms kept coming up and detracting from the story, at times sullying my enjoyment.  It was upsetting in part because most of it, added nothing to the story and was completely unnecessary.  Hunter is a great writer and really has no need to depend on isms to drive her plot and so I hope that in the third book in this series that she leaves it behind.