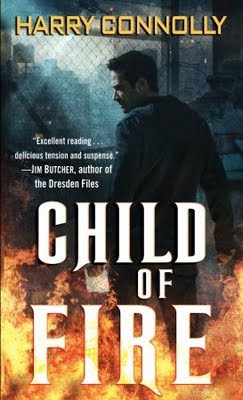 The book opens with Ray Lilly driving Annalise Powliss, who is a member of the Twenty Palace Society - a group dedicated to eradicating demons and stopping the use of magic in the world,  towards a small town.  Ray knows that when Annalise is finished using him as her wooden man that she intends to kill him.  Though Annalise is the least powerful member of her society, there is no doubt that she can easily kill Ray.
The children in this town are disappearing and even more alarming -- once they disappear -- no one remembers them, not even their parents.  At the center of this mystery, is a strange doll factory that was created specifically to give jobs to the locals, because the mining industry has fallen apart.  As with all small towns, the community is extremely tight knit and very protective of the Hammers, who are the richest family in town.  The police are completely corrupt and actually demand 100 dollars protection money a month from local businesses.
As Ray and Annalise investigate, it is clear that some sort of evil is at work in this town, but when Annalise gets horribly burnt, Ray is left to his own devices to solve the mystery and attempt to find a way to restore the children. He is armed with a magical knife made out of paper, which has the ability to cut through anything, eradicate magic and comes to him on command.  His body is marked with several tattoos that render him somewhat immune to harm.
Ray is a touch of a Gary Stu and regardless of what the situation is, or how fantastic the odds, he manages to escape.  Interestingly enough, though we are told that Annalise is the powerful one, it is Ray who ends up feeding her raw meat in an attempt to heal her, and it is Ray who ultimately saves her life. Ray also has a complete and utter aversion to guns, even when people are shooting at him, he refuses to fire back because, "someone might get hurt."  No matter how many bullets the bad guys fire, Ray never gets shot.  Uh huh...this is a pure action and adventure trope that is boring.
I also have a problem with the treatment of outsourcing in this novel.  There are plenty of small towns and in fact, entire industries that are disappearing, rendering many people out of work.  It makes sense that the Hammer family would attempt to help, but to have this help turn into the evil that is killing the town's children is a problem.  In a way, it sends the message that attempting to keep work in the community is counter to the current economic model and therefore right that people should suffer. To be clear, though what the Hammers are doing is absolutely wrong, the impetus behind their actions is not.
Throughout the book we hear about The Twenty Palaces, which is a society created to fight evil in this world.  We are even told that if Ray attempts to escape, or fails to act as Annalise's wooden man that they will hunt him down and kill him, but we never really learn anything about them.  They are the big boogey man in the corner that for some reason, Connolly decides he does not need to explore.
By far the biggest failure of this book is that it is very difficult to connect with the characters.  We are dropped almost immediately into action with very little context.  Even when Ray is no longer threatened by Annalise, he continues to act and even he is unaware as to why.  If a reader is to connect with any character in a book, let alone the protagonist, the reader must be aware of what their true motivation is.  Instead of attempting to give us a nuanced story, Connolly simply moves the reader from action scene, to action scene.
As with many books in the urban fantasy genre, there are no GLBT characters and no characters of colour of note.  I suppose because this is occurring in a small town that Connolly thought that this was appropriate, but there is never a justifiable reason for erasure.  With all the things that are wrong with this book, this is yet another reason to find it unappealing.  Having an alpha White male acting as a savior to women and children, is not in the least bit inventive.
In the case of Child of Fire, I cannot even recommend borrowing it from a library, as I am quite sure that you're library card will never forgive you for the offense.  In fact, I would recommend Child of Fire to someone suffering with insomnia. It is only 222 pages, but I promise that every fifteen pages, you will be driven to take a nap or even clean the toilet, because that is far more entertaining than reading this book.