Review: Haunted by Kelley Armstrong, Book 5 of the Otherworld Series 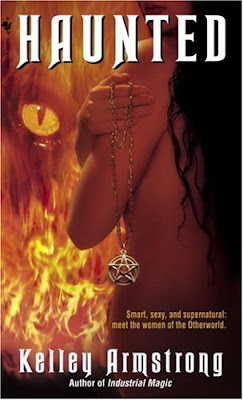 And the Fates are vaguely irritated with her – because she does a very good job of being irritating. But they have a task for her and her very very unique way of looking at things – her ruthlessness, her highly grey moral code and her determination to get things done. And she owes them a favour after they let Lucas and Paige out of the afterlife.

So she has a task to hunt down a Nix – a task that has previously been given to angels who have failed rather dismally. The Fates hope someone with her grey moral code may have a better chance against the conniving, dangerous and devious Nix. Of course, her angel partner believes that the Fates have other schemes in mind

It also gives her a chance to grow and experience the afterlife beyond the obsession with checking with Savannah – but does she embrace her new role, especially since it comes with the ability to influence the real world – and possibly be Savannah’s real protector – but at the same time tie her to her mortal daughter rather than moving on with her afterlife.

Storywise, this is an extremely good mystery. Not that they don’t know who did it – but the sheer difficulty of trying to capture the Nix is a mystery in and of itself. She can teleport, she could be anywhere in the world, she flips from mind to mind leaving a path of destruction in her wake. The difficulty of finding her – let alone capturing and containing her – is a difficult puzzle on its own.

This involves a mystery that has them jumping back and forth around the US and Scotland, jumping to different historical murders, trying to find an edge and constantly surprising the Fates with Eve’s fun, twisty ways of completely leaving the Fates standing (and bemusement why they just won’t let her kill people!) as well as heartstopping when the Nix shows she’s a dangerous quarry to hunt and attacks Eve however she can as well – including through her family.

The pacing’s extremely good – there were no slow periods even when Eve was frustrated by lack of information and leads.

I love the twists, the realm jumping and all the different murders. The flashbacks to the minds of the Nix’s different partners are both fascinating and disturbing – this book really captures the mindset of the murde3rers in a way that is pretty chilling to read and really well written.

There are a lot of scenes in the book that are really well written with a lot of emotion-  Eve’s fear, her worry, her anger, the grief of the victims, the rage of the attackers are all really well conveyed – it’s one of those books where you can feel what is being written.

The world setting for this series always fascinates me and this really blows it open. With the afterlife, the fates and the different levels of hells and different realms for different beings. And nothing is perfect – too often when dealing with the divine we have sweetness, light and perfection – but the Fates make mistakes – and the afterlife is on many levels a paradise but it’s not perfect either – there are flaws and people can be unhappy and people find their own time and purpose. Even the ghosts haunting people for vengeance can be wrong, unfair or just plain arseholes. I love the idea that cities reflect their heydays – or what is perceived to be their heydays – as well as the odd afterlife theme town – the world contains these entire Disney re-enactments for the ghosts to live in. The hells we’ve seen as well are terrifyingly imaginative without being ridiculously graphic.

Eve Levine is one of my favourite protagonists in the series. She always makes her own rules and always had – and even as a ghost is a constant rebel against the fates. Not a rebel for the sake of rebellion – as we’ve seen all too often before – but a rebel who doesn’t follow rules unless she sees how they should apply to her. She’s also one of the few characters who has an ambiguous moral code that actually pulls it off. She’s not evil, melodramatic and ridiculous but nor is she a saint really. She has her own rules which she sticks with – but they’re much wider than most people’s and she’s a big believer of the ends justifying the means.  She is sexual and Kristoff does push her – perhaps more than I’m comfortable with since she doesn’t eagerly reciprocate, but she’s always the one in control

In all, she’s a very balanced character – and includes a lot of elements that are really hard to pull off well – like the moral ambiguity and the ruthlessness without becoming unrealistic or diving into the deep end. She also grows – from being obsessed with her daughter to seeing more of the world, l seeing Kristoff and seeing that she can and should have an afterlife beyond Savannah – that she is more of a person (or ghost) than Savannah’s mother. Unfortunately, she’s also captured (well steps into a prison filled with male serial killers). She does hold her own quite well for a time but, ultimately needs to be rescued. The problem with this is that the Otherworld series has a long stream of Super Damsels who are constantly being kidnapped, captured or otherwise in need of rescuing. Can we have one protagonist who isn’t captured at some point, please?

She’s also not young in Urban Fantasy terms – approaching 40 with Kristoff, her love interest, pushing 50 – very unusual in the genre.

We have, at best, hints of inclusion. One of Kristoff’s sons is gay and we have some exceedingly minor POC in crowd scenes but that’s about it. Some of the other women in the book besides Eve are problematic – especially the treatment of the nymphs but it works as it is balanced for the numerous counter examples – from Eve herself, to Jaime to Paige.

It’s another great addition to the Otherworld series, expands the world and the setting and introduces us to one of the most legendary characters we’ve seen referred to over and over again – but never actually truly seen her.