Review: Stolen by Kelley Armstrong, Book 2 of the Otherworld Series 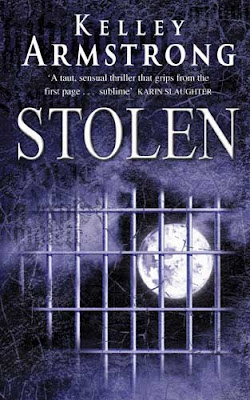 Elena has an important role in the werewolf pack. She hunts down Mutts that would threaten them all – and investigates humans who would expose them. And, if necessary, silence them. Which is what she was doing when she agreed to meet 2 women with proof that werewolves existed.
What would have been routine is surprisingly derailed when the women turn out to be not human themselves – Witches with powers beyond the normal who introduce her to a world of vampires, shamans, sorcerers and half-demons. Suddenly the world isn’t nearly so simple or so easy any more.
She – and her pack – have little time to adapt to this barely suspected new world when they have to deal with a threat that has brought the supernatural community together – an organised and heavily resourced gang of humans is hunting supernatural beings, capturing them and studying them. This goes far beyond a couple of humans risking their exposure.
And it only gets more seriously when the group hunts for a werewolf – and end up capturing Elena. Elena now has to free herself, perhaps rescue her fellow captives, find out who is behind this whole mess and try to end it. A tall order for a werewolf separated from her pack
I do occasionally like a genuine villain – and Ty Winsloe is certainly that. There’s something wonderfully satisfying about seeing a hated, reviled villain built up through the book, page by page and then cut down so completely at the end of the book. It’s nice to see some bad guy vanquishing.
It’s also impressive how ruthless and gritty the book ended. Now, high body counts are not uncommon on in Urban Fantasy (though often fluffier methods like memory wiping are used to cover their secrets) but it’s usually of a “ha-ha, I stand as a conquering hero over a pile of corpses of nameless extras!”. Here, not so much – some of the people killed had names and we’d seen them, some were relatively blameless and even with the nameless guards both Paige and Adam are disturbed by the killing – even Elena and Clay. The deaths are brutal and ruthless – yet at the same time not written off as just an extra-kill.
I think you can definitely see by this book that the series is transitioning. I think Bitten was intended to be a stand alone novel, it took off and Kelley Armstrong had this brilliant, wide, varied world ready for it – but to get from a stand alone novel to the diverse world of the Otherworld series needs a bridge. And this book not only does it very well, but does it while not being boring. It’s an original and clever idea to introduce us to the greater world without resorting to reams and reams of info-dumping, convoluted revelations or dubious coincidences or discoveries. It lacks any kind of contrivance – these different supernatural groups come together naturally and understandably.
The plot itself is interesting and tense. Now it’s hard to build tension for a protagonist because, usually, you’re pretty sure they’re going to survive. You can’t rest your tension on “will she get out of this?” because we know she will. But there is a lot of tension in how she will survive, how she will get out of it and – ultimately – how she will not only rescue everyone but properly extract revenge. This, coupled with the revelation of several very real, interesting characters (Paige, Cassandra and Adam were very real characters with pretty strong personalities) and whole new sections of the world opening up made it a good, well paced and interesting book.
I kind of have a love/hate regard for Elena. There are elements about her I love – she’s unabashedly sexual, she’s confident, she’s strong, she’s up for any challenge in an almost reckless kind of way and she’s genuinely great fun. But those same elements have annoying traits – she makes decisions that pass reckless and become downright Spunky (like driving off alone because they’re racing when she knows they’re being hunted), I’ve lost count of the times she and Clay stop in the middle of escaping or an important mission to have sex.
And there’s her relationship with Jeremy and Clay. At times it’s wonderfully rich and emotional carrying the strong sense of love and family that exists between them and it’s great to read. But, at the same time, Elena is desperately needy and constantly seeking approval from Jeremy. At the same time, Jeremy is extremely paternal and, at times, controlling  while Clay is extremely domineering, intrusive and, again, controlling.

All 3 of them have good story reasons why this is so – Elena saw her parents die as a child then was an abuse survivor in the foster system. Clay was turned into a werewolf as a child. Jeremy had an abusive and cruel father and is the pack’s alpha. But when we see these tropes arise in Urban Fantasy there’s ALWAYS an excuse for them – but it doesn’t change that these tropes are again represented. I also don’t think their backstories come together in a comforting fashion – Elena, as an insecure abuse survivor the enters relationships with 2 controlling men. Now some is redeemed in later books, but at this point it’s discomforting.
Of course, this entire book also revolves around Elena being captured – this is the whole point of the story after all. Unfortunately she doesn’t really get herself out of the predicament, even if it’s a stretch to say she was rescued. This isn’t always a problem, though the prevalence of women being captured and rescued in all fiction is depressingly high, it is somewhat dubious when, looking at the whole series, we think just how often the female characters are kidnapped.
Ty Winsloe’s constant sexual abuse of Elena was nerve-sawing as well (and being rescued by Xavier – more rescuing), especially since it was very easy to portray Winsloe as an arrogant, vile, controlling monster without the constant sexual abuse (his telling her they’d killed Clay, trying to get her to kill Haigh etc). But at least there was some nice comeuppance.
We did have some interesting discussions around sexism and class particularly in relation to Sondra’s massive class privilege but still facing restrictions on gender – and some nod to how Elena is put on a pedestal as the only female werewolf – a status that seems to make her special but also involves so much threat and need for protection. I wish both had been explored a little more but we did have some interesting.
We also had an almost picture-perfect example of gaslighting in this book – as Savannah comes to believe that she is responsible for many of the problems in the compound through the manipulations of Leah. It’s nice to see how this can be so clearly displayed
Diversity-wise, there wasn’t a lot there. there were no GBLT people and only a couple of POCKenneth the Shaman who takes next to no role in the proceedings and, of course, the big bad guy. Not empowering roles here, not at all.
Now, I don’t normally complain about covers because I know they are so far out of the author’s control – but I do have to boggle at these. Thankfully, I have the UK version – and the UK versions are blessed with sensible covers. The other versions? Ye gods publisher – what were you thinking? I actually feel sorry for Kelley Armstrong that they did this to her characters. This will be snarked.
All in all, this book kept me reading and kept me interested. But more, it did what I think it was intended to – it perfectly set me up for an entire series, introduced this huge world from the previous narrow view we’d seen and set up several new characters and concepts for us to be interested in. Having read so much more of the series now, I do wonder how much planning Kelley Armstrong must do to make it all fall in place.