Review: Death Most Definite by Trent Jamieson. Book 1 of the Death Works series 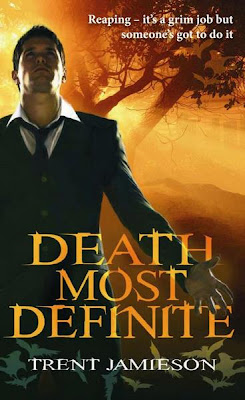 Steven is a Pomp. He acts as a conduit for the souls of the recently dead to pass on to the underworld. Working for Mortmax industries with his fellow Pomps, they work in the Brisbane subsidiary (with other branches across the world) to ensure the ghosts pass on and the evil Stirrers don’t come back the other way
Except things are going badly wrong. Pomps are dying, ghosts are going unpomped and the whole organisation has fallen apart. Worse, the Stirrers are coming through in greater and greater numbers, hunting down more Pomps and increasing the amount of bleakness and death in the world.
Leaving Steven alone except for Lissa – a ghost of a Pomp who won’t pass on, is determined to see Stephen survive and for whom he has developed a disturbing attraction. He’s the only one left to track down what is happening, to stop the Stirrers, to Pomp ghosts into the afterlife and, above all, stop a Regional Apocalypse that could consume all of Australia.
I’ve seen a couple of versions of humans acting as Grim Reapers as it were but nothing like this. It’s an original story with a novel world and concept. For uniqueness alone I’d give it a lot of points simply because it is so very new.
Except for the epic ending, the characters are also rather lacking in woo-woo super powers which also adds an interesting twist. This isn’t a “my new shiny ability will save the day” situation. Pomps have, abilities, certainly, but when being chased by people with guns there’s not a whole lot they can do except run or die.
The nature of the stirrers was also an interesting enemy. Creatures dangerous not because they’re zombies (though it’s a new twist on the idea of zombies) but because they suck in life and hope out of the world, leading people to despair, people to just lay down and die, birds fall from the sky, plants wilt, even the microbes in the soil to die from their presence
It’s also set in Brisbane, Australia, which is pretty unusual for most Urban Fantasy I’ve read. Add in, there was a clear sense that the author clearly knew the city well. I get a very strong sense of place and location from the book, a reality to it that comes from knowledge and experience.
It also manages emotional impact. Even while being funny and downright slapstick and silly at times (perhaps a little too much now and then, but I laughed so I won’t criticise) but we still have emotional impact of how much he’s lost – and the Stirrers in the bodies of his loved ones.
I do raise an eyebrow at the word “pomp” however, it just struck me as rather ridiculous. And the surreality of the situation, the newness of the world and its unique flavour occasionally left me a little lost. It wasn’t a casual read, I think, there were places where you had to focus and maybe re-read a couple of times to be very sure you actually understand what’s happening and why. But that’s as much because it is a unique world without all the patterns we have seen so many times before. The pacing and writing of the book is generally good – we have moments where the character is wandering around lost or reacting repeatedly to situation after situation with no clear goals or solution in sight, but both are intended and either give the book boring moments. I think it’s a sign of good writing when you can have the character lost and confused for a sustained length of time without the reader becoming lost and bored. Still, after this introduction, I expect more from the next book simply because there will be less loss and confusion.
The book is completely erased, as straight, white and able bodied as they come. There is one dominant female character who I actually like a lot. She’s a ghost so is inherently limited in what she can do and how she can affect the world around her. Yet within her context she was strong, skilled and capable. She may have been incorporeal but she saves Steven many times and is the voice of reason and planning when he is rather flailing around in a panic. It’s a good example of how a character can be strong and a leader without having super powers or even being able to affect things physically. Sadly, despite her capability, she still ends up being rescued. I can only think of 1 other female character we see enough to actually get an idea about her, but Sam is extremely capable, apparently intelligent and skilled. I wish we’d have been able to see more of her.
All in all, it was unique, fun, funny and a fascinating book despite its problems with erasure. And I did have to focus in places a little more than I like. And, perhaps, the time of confused reacting lasted a little longer than I prefer –but that’s what it was, matters of preference rather than problems with the book itself. More, it’s left me very curious about the next book, things have been established in dramatic, even epic, fashion and I’m curious where this story will go from here. I suspect the next book will, by necessity, have to be so different from this one.