Face Off: Andrea vs Andrea - the Walking Dead Comics vs TV Series 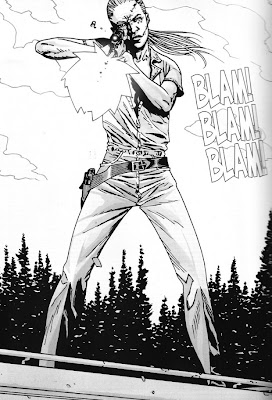 
Attitude Towards the Group

Comics Andrea: Andrea is a part of the group - not just a part, she is a linchpin of the group. She always has everyone's back. She is relied upon and a fully integrated member of the group wherever they go - through every stop, through every challenge, she is a part of the team. She is always an insider in the group, not only in every plan, but with every person - she is a friend with all members of the group, and she sits and talks to all of them (not argue with them, but actually talks to them as friends). When Rick is close to the edge, she worries about him; she was with Lori during her pregnancy and they both discussed and were worried about Carol’s growing instability (contrast that with her attitude towards Beth - She Who Has Taken To Her Bed - in the TV Series). She is a group member, a friend, she cares about them as one of them - not the tacked on addition who spends all her time apart. Most importantly, Andrea is always looking for a way to help.

Series Andrea: Episodes pass where we barely see her. She often has an antagonistic relationship with Dale, and since the last episode, she has a similar problem with Lori. She has thrown in her lot with Shane of all people, and in doing so virtually sets herself against Rick, as the tension between them grows. The only person in the group that is more of an outsider than her is T-Dog (because he’s never on the screen). In some ways, even Darryl and Shane are more involved. She frequently acts without considering other people in any great detail and sees things through a very narrow lens of her own experience - never more apparent than in 18 Miles Out, when she leaves She Who Has Taken To Her Bed unattended.

Comics Andrea: Andrea is absolutely essential to the safety of the group.  She is often put up into the tower to keep watch because she is a great shot.  Though Rick is still very much the unofficial leader of the group, she is deeply involved in all decision making and no plan ever really happens without her having a role to play, and this is especially true after the death of Dale.

Series Andrea: Andrea has only just started to learn how to fire a gun - but that had to be carefully taught to her by a man (of course) and even then, Shane abuses her while instructing her. And she even says she’s only learning to shoot because she doesn’t want to do laundry any more, not because it helps the group - but to avoid chores! Add in Dale’s habit of keeping guns from her and it’s almost like a tantrum. She has no particular natural talent that sets her apart, and she’s hardly the backbone of the group’s defense, as she is in the comics. The one time we see her make a shot (except the barn when Shane releases the Walkers), she shoots Darryl. Not exactly a testament to her elite skill

Comics Andrea: In the comics, Andrea is in a relationship with Dale. Now there’s many ways a relationship between this huge age gap could have been portrayed poorly, with the idea of a father figure, demeaning Andrea or fetishising her. But instead, we have a relationship that is characterised with genuine care and affection - one that started with mutual comfort and grew into mutual love and respect. It ended with genuine grief, and genuine mourning. It was very real and very touching.  When Dale passed on, Andrea kept Dale’s hat and even spoke to him - sort of keeping him alive in her mind.

After Dale passes she and Rick become closer.  This relationship is based on a need for human contact and a fear of the uncertainty of the times that live in. Rick is hesitant because he has already lost so much, but it is Andrea who reminds him that they are still alive, and refuses to give into his fear. Andrea recognizes that she has to keep moving forward and cannot let fear rule her life, though she has already lost so much.

Series Andrea: Other than sneaking off to have sex with Shane -- who should be dead -- Andrea has had no ongoing romantic relationships with anyone. They bond based in the fact that they are both outsiders.  In 18 Miles Out, Andrea has a blow out with Lori where she mentions Lori’s boyfriend - who she clearly meant was Shane.  From this we are lead to understand that Andrea is actually upset that at one point, Lori and Shane had a sexual relationship.  She clearly sees herself as the rebound girl. Andrea is also highly aware that had Lori not ended up pregnant, she might have been able to convince Shane to leave with her, and so she feels secondary.  Andrea’s big beef is that she was not given a gun, but other than that, I can see no reason why she has been pushed to the fringe of the group. It feels like angst for the sake of angst.


And the bonus face off! Shane vs Shane!

Comics Shane: Is dead. This is good. We approve.