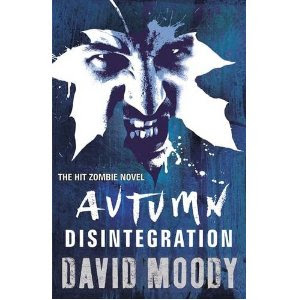 When I first started reading Moody's Autumn series, I was completely drawn in.  Moody's work is stark but it grabs you right away.  With each word, the reader is forced to place themselves in the place of the survivors of the zombie apocalypse.  Moody has once again re-entered his post apocalyptic world to give us yet another story of survivors.  What started out as innovative and new has simply become repetitive and boring.

As in other books, even when dealing with different survivors, Moody attempts to connect them to each other.  In this case, the connection was a helicopter which we are meant to assume was the one used to ferry the survivors to Cormansey to avoid the continuing threat the zombies posed.  Trapped a hotel, trying to be as quiet as possible these survivors are desperate to get the attention of the helicopter because with each passing day it becomes clear that the distraction that has been for the zombies is no longer holding their attention.

The new element in Disintegration is a disease that is now killing off survivors who survived the initial release of the virus.  They believe that it comes from contact with the diseases that a mass amount of dead bodies would create.  They are forced to decide whether to quarantine and ignore this latest round of victims or attempt to help them at the risk of getting sick.  The question then becomes, is it okay to leave someone who is sick alone to die at the hands of zombies to save your own life?

Much of the character interaction came down to a testoerone pissing contest between Web, Jas, Sean and Martin.  Web and Sean being young flout authority at every turn and see establishing their manhood as being as loud and reckless as they desire, regardless of the effect that it has on others.  When it comes to female characters much of the conversation concerned whether or not it was still worth investing ones energy in nurturing others in an environment in which people are constantly dying.

Stokes and Gordon are both men who have issues with their hip.  Naturally this makes them disabled but the survivors never stop accusing them of faking it and not pulling their weight.  This may be quite realistic in terms of what would potentially happen; however, it does not sit well with me that Moody did not think it necessary to have even one character point out the disableism in this situation.  Disabled people are constantly forced to surrender to gatekeeping, and this is particularly true, if one has an invisible disability.  So far the representation of disability in this series has been anything but possible.

In Disintegration, Moody once again went back to his cisgender all straight list of survivors.  To be clear, it took four books to find a character who was gender non conforming but apparently, now that Moody has gotten his token out of the way, he felt free to return to his formula of erasure. In terms of POC, this time we got Amir and Jas.  We learn that like everyone, they are mourning the loss of people.  Jas stands out as he is the one who rides a motorcycle and was smart enough to divide the food.

Disintegration is the longest book in the Autumn series so far, but it didn't offer us anything new.  It left me wondering if Moody is bored by his own series.  There is only so much recycling that anyone can hide behind an engaging style of writing.  Continually introducing new characters into the same situation for five books without any advancement screams of a lack of imagination.  At this point I am ready for Moody to either move the series forward, or stop it altogether.  If you are following this series I suggest you head to a library, and borrow this book rather than buying it.  Your wallet will thank you for not spending money needlessly to re-read the same story with different characters.  As readers, we deserve better than to be offered recycled work.