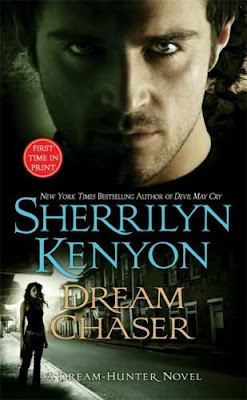 We met Xypher in Devil May Cry. And he got a prize for helping them stop the Dimme – a month free from Tartarus. A month he can spend getting revenge on Satara, the woman who betrayed him and caused him to be condemned to eternal torture in Tartarus in the first place.

Of course, getting to Satara isn’t easy and while hunting he runs across Simone – a pathologist seeking answers to an apparent serial killing. Simone is dragged into Xypher’s world when Satara’s agents bind them both together – rather than try to kill the immortal Xypher, the only have to kill the only-too-mortal Simone to kill them both. Oh and the binding stops them getting more than 20 feet from each other.

Forced to live in close proximity, Simone (and Jesse, her 80s ghostly companion) have to deal with his extreme surliness and complete lack of trust – after centuries of being tortured and betrayed he’s unwilling to get close to anyone, even though Simone starts to melt him

Then there’s the problem of the Dimme that is apparently loose in the city and Xypher’s demon brother who has been sent out to kill Simone, Xypher or both. And that’s before people start making deals with Jaden - a being so powerful demons make Faustian bargains with him

Ok I have to say that there were some major issues in this book (especially the romance) that were pet hates of mine – because of this (and the same applies to any review, but doubly so here) if they don’t annoy you so much you may actually enjoy the book. But me, they annoy – and annoy a great deal.

Firstly – and this is a trope the Dark Hunter series uses excessively – Xypher has a horrible tortured past (like everyone in this series. It’s almost reached comical levels). And because he has had such an awful tortured past he lashes out at everyone around him – including Simone – he can’t trust other people again, ever, because one person betrayed him and now he hates everyone and everything – rawr! Not only is it tired and overdone and we’ve already seen the exact same story played out in
Devil May Cry, Dance with the Devil, Upon the Midnight Clear and even Night Pleasures,              (far more if we just include men who have had long tortured pasts) but it also serves as a justification for him constantly lashing out at Simone.

And Simone? Pities him. The angrier he is, the more he lashes out at her, scares her and has temper tantrums at her, the more she pities him. Every surly outburst or sullen pout is just more proof of how tortured and sad he is and why she pities him even more! It reached a point where, if he had stabbed her, I think she’d have spent her dying breath to wail “oh see how much he suffers!”

I hate these tropes combined. I hate the whole Loving Contempt trope, I hate the idea that you should tolerate abusive behaviour because it may hide a delicate, sensitive soul. I hate the idea that it’s laudable to endure the surliness and I hate the idea that lashing out is ok if you have a painful past – while it makes it understandable, there’s no reason why Simone should bear the brunt of it. And I really really hate the idea that a surly, angry man can be won over if you’re patient enough and kind enough and loving enough. Enduring abuse shouldn’t be a praiseworthy activity nor should it be the path to happily ever after true love – it’s horrendously skeevy.

More tropes I hated in the romance – yes the fast forward button was pressed again. Xypher and Simone spent less than 2 weeks together – in fact I think it was more like 3 or 4 days. And yet they BOTH were willing to sacrifice their lives for the other and Simone was desolate without him. really? They’re not even acquaintances yet, but they’ve already reached “I can’t live without you!” stage? Even most depraved stalkers need a little more time than that to get hung up on someone.

To finish off, in standard terms this immortal couple gets to be immortal (rather than just relying on their heritage to get the job done) by effectively enslaving Simone to Xypher. Awwww, sooo romantic *uckies uckies uckies*

And another element I hated – and this is also common in the series – the Magical Healing Vagina. Yes, it has capitals because it’s becoming a new trope and being added to the Lexicon because I’ve seen it too many times. Xypher has suffered literal centuries of torture caused by betrayal of the one and only person he has ever loved. This, naturally, causes him considerable trauma – but twu luv (and some sex). As we discussed in our Friday Discussion about Traumatised Pasts, it’s all kinds of skeevy to portrayal severe trauma as something one can just get over with some vigorous shagging.

Ok, I should move to the story – but, as I said, the romance really does make up the majority of this book and I hated it (it also confuses the motivations for the book – the whole reason Satara wants to kill Xypher is because he is driven by revenge to kill her – a revenge that has festered for centuries but he sets aside after 4 days acquaintance) – but there are other problems in the plot as well. Long after Simone loses the collar that will kill Xypher as well, she is targeted for death. Why? I have no real idea. The Dimme is a demon of such power that 7 of them were considered a force that could end the world in Devil May Cry and in this book was considered powerful enough not only to kill Xypher but Appolymi – the Destroyer herself (a goddess that has slaughtered entire pantheons before).  And she gets kidnapped – how how how did anyone managed to subdue her? Especially since they intended her to use her as a weapon – if she was dangerous enough to do what they wanted then surely she was too dangerous to kidnap and coerce in the first place?

This story also introduced Jaden and his mysterious master. While not bad in and of itself, Jaden seems to be joining Acheron and Savitar as the series third Deus Ex Machinae. And that’s a trope that was tired 2,000 years ago and hasn’t got better with age. Also, a small niggle, but with the revelations about HOW Satara betrayed Xypher we completely undermine why Katra bargained to have him freed from Hades in the first place.

Now this story did have elements I liked. I think Jesse was a wonderful touch – snarky and fun. He bounced off Simone extremely well. They had an excellent friend or even sibling relationship which was extremely funny, very real feeling and very emotional as well. It was a gem in this books. This really redeemed this story from being rated far lower than this in my eyes

The concept of Simone, the medical examiner who sees ghosts could have been much more fun. In fact, a book following Simone and Tate (a pathologist who was a Squire working for the Dark Hunters) would have been an excellent read – they were good characters, they worked well together, they had Jesse for comic relief and keeping it light. They were funny and fun, emotional when necessary but business like when it was called for. Sadly it didn’t happen-  and the one murdered ghost they did find they kind of wrote off and dismissed – she was a tool for Xypher to win Simone’s affections more than a character with a story and a tragedy in her own right. The parts of the story that did look at these 3 were interesting and fun – but they were only a small thread next to the huge romance.

Inclusion-wise – Tate is black but almost non-existant. There are no GBLT characters again.

All in all, I didn’t enjoy this book. I found the premise of the romance both contrived and problematic and the plots around it (such that they were) to be rather shaky and unsupported. But, again, I remind people that this is based on a lot of tropes I loathe with the fiery passion of a thousand suns – so if you don’t hate them – or even like them – then this is a book you may appreciate.