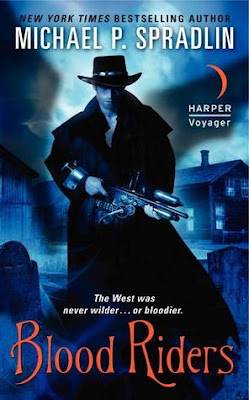 Jonas Hollister was a soldier in the army, having done his duty during the Civil war, he continued on with much less dangerous work – until checking some disappearing settlers leads him to Malachi, vampire, Archaic, blood sucking monster that destroys Hollister’s entire squad.

Hollister survives and makes the terrible mistake of telling the truth – which gets him thrown in military prison for several years. Until Malachi is more open and a secret branch of the government wants to recruit him – to hunt down Malachi, stop what he’s planning and stop any more towns being wiped off the map.

Shaniah is an Archaic from the old country, their leader in fact, a role she won over Malachi. Her people know how to survive – hide, hide from the humans and their numbers and their magic and their deadly technology. Unfortunately, Malachi doesn’t agree and thinks himself top of the food chain. His attempts to subjugate humanity will, in her eyes, only raise humanity’s wrath against her people. He must be stopped before the backlash destroys them.

Both Shaniah and Hollister are on the hunt to save both their people.

I didn’t expect to like this book much. A paranormal steampunk set in the old west. Now, I like steampunk and, obviously, I like the paranormal – but, I have to say, I really don’t like westerns and I have never read or watched one I’ve enjoyed. And I liked this book. The plot, characters and concept entirely engaged me despite my dislike of the setting – I have to applaud any book that can take elements of a genre I have no time for and still make me like it.

Paranormal Steampunk can be quite difficult to get right. It’s hard to set the balance between revelling in the beautiful steam-driven technical devices, the cultures and mores of the time and setting and then to insert supernatural elements. Balancing all three can be difficult to do well and usually one or other will suffer – or, all 3 will be balanced but so much effort will be spent on creating this perfect world that the story suffers.

This is one of those that hits the balance. The world is extremely reminiscent of the Old West – and not just the Old West of bad TV and Spaghetti Westerns , but the real Old West. It has the shiny brass, the nifty trains, the big, clever guns and the steam that so characterises steam punk. It has the historical references and places that mean you never ever forget exactly where it is set and who these people are. And we have sufficient attention devoted to the history and nature of the supernatural to give them weight and depth rather than them just being miscellious bad guys with fangs.

And through that we have a story. It’s not an original story by any means, human agent destroys evil monsters before they proliferate and take over the world. But it is a story with sufficient twists and with some realistic and engaging characters and enough attention to detail and setting to make it well worth the read. It’s well paced, with no deviations except what is necessary to fill the background. All the information is relevant even from the musings. There are some issues with “show don’t tell”, Shaniah in particular is prone to long internal monologues where, for narrative reasons, she decides to reflect on her history, her people’s history, her nature, her strengths and weaknesses etc which is a bit of an info dump. I always wasn’t sure that the senator as a secondary antagonist was particularly necessary especially as it didn’t actually add anything to the plot and dealing with it was so extremely anti-climactic. Still, it was interesting enough that it was a minor distraction rather than a derail and serves to put some lens on how the rest of the government and powers that be are affected by the monsters and by Hollister hunting them. As a balance, the action scenes are tight, well described, well balanced and really get the battling across.

I also liked seeing in practice what we have read about so often in Urban Fantasy. We often read of supernatural creatures hiding simply because they know humanity could wipe them out. In this book we have dramatic fight scenes and tense moments while the cast hide in a prison, surrounded by Archaics, any one of which could have slaughtered them. The strength and the power of the Archaics is usually well maintained (nearly always, there are one or 2 moments when I think the humans get up close and personal with an Archaic in a way that), their superiority to humanity is clear. Yet we also have scenes where the archaics are utterly slaughtered by just Hollister and Chee’s guns. Where the combination of shiny technology and old superstition combined make them utterly untouchable to the unchanging, unimaginative Archaics.

The only thing I’d say about these epic fight scenes is the lack of emotional content. Entire towns are wiped off the map, turned into Archaics, slaughtered, hundreds of people die but there’s so little impact from this.

People often take the excuse with historicals to either completely erase all possible minorities, or to let various prejudices run rampant in some kind of unpleasant quest for “authenticity”. While there were no GBLT people, there were strong female characters and Blood Riders had several POC, including a major side character. While there is overt racism in keeping with the era, it is always challenged and presented as wrong and are POC who are strong and capable and skilled. As a book set in the wild west there is some conflict between white settlers and Native Americans but there is also a constant reminder that the Native Americans have an extremely good reason to be furious and an acknowledgemenet of the injustice they face. Different Native American tribes and nations are presented separately as well, rather than clumsily grouping them together.

Chee is an interesting character, he’s deep and capable, probably more capable than anyone else in the books. He is mixed race, being of Black, Chinese, Latino and Creek heritage. I would like to see the character built up more, we got snippets of him and his past but not much. And while he draws upon all of his cultural heritage, there is a little element of him being a magical POC Swiss army knife – allowing martial arts, Hoodoo and the arts of a Brujo with additions of Native American practices to be pulled out of the hat as and when they become useful.

Shaniah Is a strong character, a leader of her people, intelligent and capable. Yet, at the same time she is presented as vulnerable. Part of this is to make Hollister seem even remotely useful to her despite her obviously greater physical capability. But still, she seems to defer to him unnecessarily and unreasonably – and I don’t think it was necessary to make her into a love interest, especially since it has already been stressed how little she is interested in non-archaics. It also felt unnecessary that he had to rescue her in the big fight – make the big fight dramatic, maybe allow some help, but the one strength Shaniah brought to the group was her fighting prowess, which felt undermined. On the flip side, one of the strongest female characters who was human was a prostitute – strong, intelligent, capable and a natural leader.

I was surprised by this book, I enjoyed it a lot more than I thought I would and, more, I enjoyed the setting a great deal. As a book, it’s very good. But as a precursor to a series it could be truly excellent. The relatively uncomplicated plot make it a perfect way to showcase the scene and the characters while keeping the story interesting - perfect for an introduction

We received a copy of this book to review through Eidelweis
Posted by Sparky at 3:00 PM