Review: Into the Woods by Kim Harrison 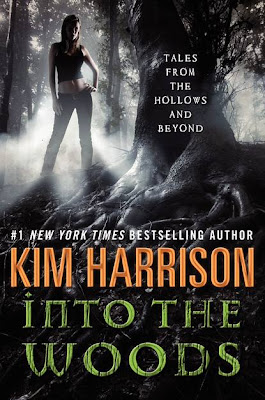 The first half of this book contains a series of short stories set in the Hollows world. And I think they do some excellent jobs as short stories – filling in the gaps of the character’s development. They tell the story of things we know happened in their past that we’ve heard about, that has often been mentioned, but which we haven’t actually seen. Because we’ve read the Hollow’s series we know that they are pivotal moments in the character’s past and really add to what makes them the characters they are and what motivates them.

So we see Rachel when she first summoned Pierce. Her struggle in still recovering from her illness and the constant battles against fatigue which, in turn, drive her to prove she is as strong and physically capable of those around her. Her resistance to a quiet “academic” life as, in some way, giving in to that weakness. It also really characterises and adds depth to her relationship with her brother.

We see Ivy first framing Arthur, her supervisor which certainly becomes a major element in later books as well as her interviewing Mia the Banshee for the first time. I think this story is excellent not just for showing us two iconic events in the Hollows series, but also for displaying vampire culture at its most blatant. I don’t think we learn over much about Ivy, certainly not beyond what we already do – the broken, damaged person that Piscary abused and the problems that left her with – but it did really show how much such abuse fits into the vampire world and how it is an expected part of vampire politics and, through that, the IS. The expectation that a rising living vampire has an obligation to give up their blood and their bodies, and how harmful this exploitation and abuse can be to their psyches.

The stories I thought were most revealing were both looking through Jenks’s eyes – just seeing things from the point of view of the Pixie, their culture, their size, their power and seeing through Trent’s eyes as he claims his daughter back. After so long with him being the cold hard manipulator, the almost antagonist, it’s such a change to actually see who he is, his motivations, his beliefs, his worries – and through them to gain an insight into Elven culture, perhaps the Inderlander species we’ve seen the least of. The same applies to seeing Ceri first becoming Al’s familiar – these were the 3 stories that shed more light into corners of Inderland we hadn’t seen very much.

At the same time, if you have read the Hollow’s series, this book won’t add anything. Everything in these books has been referred to or inferred to some degree in the main plot line. The extra information added does nicely flesh things out and let us see their pasts rather than merely hear it reported or remembered; but it adds nothing new, nor, particularly, does it develop the characters since we know this about them. It is still nice to see these moments we know defined their lives, nice to hear it from their own mindsets and especially nice to step outside of Rachel’s POV and see what the characters around her think – gaining gems like Ivy’s respect for witch magic or Rachel’s determination to overcome her physical weakness and definitely Jenk’s pixy-eye view.

It’s also worth noting for people who have bought anthologies that these short stories appear in different anthologies Kim Harrison has contributed to. Double check if you don’t want to buy the same story twice.

As these stories did occur in anthologies for readers unfamiliar with the series, there are moments when the lore has to be explained. Unlike some, I think this is really well done in most of the stories with minimal unnecessary exposition or clumsy info dumping. But Ivy’s story is still full of not just a lot of personal angst, but also a fair amount of info-dump to fill in the world.

This book also contains a section “Beyond the Hollows” which are stories not set in the Hollows universe. And I, honestly, didn’t enjoy them very much.

This is the story of grandmother, mother and daughters who are facing the seductive and dangerous draw of a spirit, a dryad, that was bound to a tree by the grandmother and is now free. It’s an interesting concept and certainly a new twist on the dryad mythos, but he story just seemed to be consumed by Lilly’s worry about her daughter and her mother without much plot. Either she’s fretting about her mother succumbing to dementia for believing in children’s stories or she’s worried about her daughter falling into the dryad’s clutches. The first is cured by reaching the second which is cured by quick, relatively simple action. It ended on a question but without more character development beyond what we’ve seen it didn’t have much impact. It either needed developing beyond a short story, or it needed more story in it beyond Lilly’s own internal conflict.

He inherits land, he goes to check it, is convinced by some relatives that the lands has dryads on it so doesn’t sell it and, instead, tries to encourage more dryads. It’s not a bad story it’s just a little… flat and linear. Was there something missing? Is there more to come? I feel that it may be my personal dislike with short stories as a format that is shining through here – I expect more twists and turns and aspects and development, I prefer more of them, so this simple little closed storyline of “have forest, convinced dryads are real, aww, isn’t it shiny” just feels hollow, there needs to be more, even though it is neat, self contained and everything is contained and addressed perfectly, I’m left feeling “and?”

I’m putting these together because I had a very similar reaction to both of them. In the Pet Shop Boys we’re introduced to a new world with vampire fae crossing the boundaries of the world to try and harvest people. There’s a suggestion of a lot more as well, with his employer clearly being involved into the shadow world. They make their play for the protagonist to join them in the darkness…

Which is an intriguing idea, a fascinating looking world and a great introduction. This would be a perfect book for a mixed anthology to introduce me to a series of books – I’d go out and look up book 1 straight away. But there isn’t a book 1. As far as I’m aware, this is the only story in this series. So, again, I finish the story and think “and…” but this time even more frustrated.

Which is only multiplied with Grace. Ok, the character Grace is very very very similar to Rachel Morgan – and? I like Rachel Morgan. Another Rachel Morgan, in a very different setting would be quite interesting, with different characters around her and a different world interests me. She works for the Strand as a person who seems to have some kind of power to throw and control electricity or similar power, finding people like herself before they become a danger to other people. It’s intriguing, it’s interesting and it’s a great introduction to a series of books… that doesn’t actually exist.

With both I’m left with a feel of “what’s the point?” and “where’s the rest?”

In general it’s a nice book I enjoyed yet, whether from my personal dislike of short stories or simply from the stories within, it felt like a rather unnecessary book. I didn’t care for the books in the Beyond the Hollows section, and the others were interesting but didn’t really add anything to what I already knew. I think it may also be part of my excitement and self-hype at a new book in the Hollows series that built up expectations higher than was warranted. It was a nice book, it was an interesting book – but it’s not a book I could ever see myself reading twice and would probably borrow it rather than buy it.