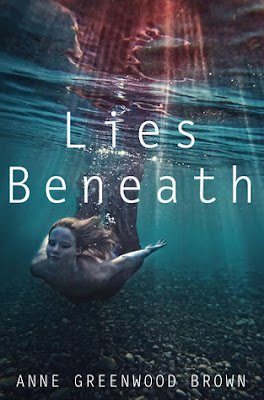 Calder is a merman, a predator who drags humans to their deaths so he can feed off their positive emotions to fill the voice inside every merperson. But this time he and his sisters are not targeting a random human – they have set their sights on John Hancock, a man promised to them by his father and a debt that has long been owed

Of course, even though he’s not finally within their reach, getting him to the water is a different matter entirely, especially since he has listened to his family history and is wary of the lake. It falls on Calder to try and find a way to the man, through his daughter Lily if necessary.

But getting into Lily’s affections isn’t easy, especially as she comes to suspect something is different about Calder and stories of lake monsters abound. And then there’s the trap of his own emotions, caring for his prey even though killing John Hancock would not only be revenge, but his chance at freedom from his sisters.

This novel is primarily about a romance and, I have to say, it didn’t appeal to me at all because it had several tropes I strongly dislike. But I will start with on element that was almost done right. Calder starts by being stalkery in the extreme. He follows Lily around, he tries to charm her, he appears at her house at truly bewildering hours - before anyone is awake (except Lily because that girl never sleeps) and generally is a creepy creepy stalker guy. And Lily is put off because of that – for a while anyway. She doesn’t even let his rescuing her convince her that she must instantly open her heart to the stalker. Yet… she does end up with him so the stalking does pay off, and for the level of stalking her reaction is still a little low. Someone’s hanging around your garden around dawn and regularly camping in your hammock? A little creeped out is a pretty minor response.

Firstly, it rushed in too quick and too soon. It seems that Calder arrives in town, sees Lily and is pretty soon smitten. It’s not love at first sight, but it’s close. And when you think Lily is the daughter of his big bad enemy John Hancock and a tool to getting at him, I don’t really see him being all open and looking for love. Yes, I know it’s a trope in romance and YA, but it still loses me to see people declaring eternal-love-I’ll-totally-betray-my-family-for-you after a brief acquaintance.

But secondly, and mostly, it’s how Lily reacts to him. Not just the reluctance-turns-to-love trope, but how, when she discovers he’s a merman and he finally admits it they have conversations that go a little like this:

Calder: I’m a merman, a dangerous predator
Lily: yay, merman! Let me quote pretentious poetry!
Calder: Actually, we kill people, I’m a murderer.
Lily: But you don’t mean it and we can be happy together. Let me make you happy.
Calder: We. Are. Predators. WE KILL PEOPLE! They are DEAD
Lily: Under the sea, under the sea, darling it’s better down where it’s wetter, take it from me!

What is this, Bella Swan the Rather More Soggy? It’s not just the whole falling in love with a mass murderering monster because he’s so hot and romantic which is such an utter depressing trope in Paranormal romance. No, she doesn’t even pause, it’s like he confessed to a minorly annoying personal habit like jangling his keys or ruining perfectly good pizza with pineapple (don’t argue, that’s just nasty) rather than drowning multiple people so he can suck on their happiness (this? Sounds waaay dirtier than anything that happens in the book).

We know he was alive during the Reagan administration and we know that 6 months is considered an extreme fast for him. So if you consider he and his sisters normally kill, what, at least 4 people a year? Uh-huh.

The problem with this is that when we have the inevitable break-up moment, when she discovers that he actually got close to her originally on his sister’s orders it makes her look extraordinarily selfish and self-centred. Sure she can brush off the fact he’s a habitual murderer, but manipulating her emotions?! How very dare her! Yes, there’s the threat to her father as well – but there’s still a whole load of “I can ignore your murders so long as it’s not my family” going on there.

This may also be why I didn’t feel any of the emotional impact. Whenever Calder tells me yet again how sad and conflicted and torn he is, it just fell flat. He said it, it was told, but I didn’t get much impression of it from the page. Similarly, the reasons for his self-loathing just jar me. Like he hates himself for exploiting Lily. Or Lily is just too good and innocent to be hurt so… fair enough as reasons go, but

I’m not against a redemption storyline. I’m not against the monster finding love and giving up his evil ways. I’m not against a monster in a desperate battle between his conscience and his urges. But we didn’t get any of that – Calder’s abstinence from killing is presented more as a whim or eccentricity than any level of contrition or guilt or moral stance. There was no sense of guilt, no sense of moral analysis – indeed, the closest he got was concern that he would be “killing someone else’s Lily”. The redemption part of the redemption storyline, or the battle against his urges or anything else that presents me an excuse to look past the fact Calder is a mass murderer is completely missing from the book. Maybe it will develop later in the series – but his murdering ways were presented as a footnote or a reason why his sisters are evil, not a reflection on him.

I think this book tried for dark and gritty with its theme and setting. The murderous merfolk seducing mortals to a watery grave, bodies, their cruelty, their need for revenge, their merciless beliefs in justice and debts. All of these could have made it dark and gritty but… didn’t. Maybe because we spent far more time on how much Calder loved Lily and his jealousy over her being around another man so the gritty darkness was lost in standard romance tropes. Maybe it was the aforementioned lack of emotional impact being conveyed. Or maybe it was simply how the darkness was written – sure we had Maris excitingly describe how she’d like to torture Hancock, but she’s the villain, she’s supposed to be nasty. But the other casual deaths were treated like that, casually. Maybe if they’d have the Hancock family discuss how horrible it is, or a candlelight vigil for the dead – instead of the bodies being tossed around casually without any real emotional impact. You can’t create gritty by killing off some redshirts. At least not without having someone cry over them. There is just no emotional impact in this book to carry the theme.

As to the plot in general – romance romance romance with a slightly shaky premise (perhaps if Mermaid culture had been developed more, or if Maris hadn’t kept the big secret for so long so there’d be some logical connection between Granddaddy Hancock’s broken promise and the White’s mother’s death then it would have made more sense). The pacing was good, it did move along quickly with minimal distractions. It was focused and concise and pretty well written in terms of style and balance between description and brevity.

Inclusionwise we had one POC, Parvati, one of the mermaids who served to be seductive and cruel. I feel she was the one with the least development, being largely just beautiful and seductive and, alas, “exotic”. There were several women in the story beyond Lily – the sisters, of course, who had some of their own motivations but were largely sexual and/or cruel often for the sake of it, which isn’t the best trope. There was also her friend who was mainly interested in how hot Calder was and her mother who was also a disabled woman with MS which conveyed quite well the concept of good and bad days with disability – and the idea that just because someone is in a wheelchair some of the time doesn’t mean they have to be all of the time, and not being in the wheelchair doesn’t mean they’re faking it when they are. There were no GBLT characters.

In total, I think this was a book with a lot of potential. Cruel, predatory merfolk rather than the more twee, tragic, romantic versions Disney has pushed on us. It had an interesting world with hints of an entirely different culture that had a lot of potential to be fascinating. It was original, it had a great world, a great concept and there was so much that could have been developed into a unique, fascinating, dark and exciting Urban Fantasy.

Unfortunately all that potential was used to tell a rather clichéd and not particularly fun romance instead.