Zombieland Season One, Episode One 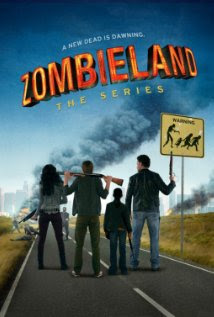 The show opens up with a couple having a ridiculous conversation. Behind them, there is a window and we can see people being attacked by zombies.  Chaos breaks out but they are absolutely oblivious to what is going on, until a zombie crashes through the window and attacks the male who was in the process of arguing with Tallahassee about the pickle on his sandwich.  The woman takes off running and Tallahassee uses his cart to attack and kill the zombie, as the zombie tries to eat the male.  Tallahassee steps through the window, as in the distance, a plane crashes and people are running in panic.

Two months later we learn that there are few non zombies left.    The story is narrated by Columbus, who tells us that one of the things people need to keep up with is cardio because you always have to  run for your life. Columbus is in love with Wichita and they are traveling with her little sister Little Rock and Tallahassee. Apparently, it was Tallahassee's idea to use the location of where they are from for an identity.  They set off fire works for Independence Day, though it's actually only June. Tallahassee asks what's missing after the fireworks display and Little Rock says that there are people missing.  Columbus suggests that they need to think about humanity's future because there is no future without people.  Little Rock says that people suck and Wichita adds that people are responsible for everything bad that has ever happened to people.

They get into an SUV and the Onstar operator is still working and they ask her to lead them to other survivors. Detroit tells them that she found a group of survivors on Fisher's Island N.Y. Columbus says that ever since he found a family, all he wanted was a home.  Wichita points out that it's ridiculous for them to travel so far to meet people they know nothing about. Columbus suggests that they start a community and Detroit tells them where they can find someone. Wichita finally consents to enlarging their group when she realizes that it is three against one.

In Los Angelos, they find a man who is on a window washing platform.  He starts to lower himself down to the ground and is attacked by a zombie, who jumps out a window to get him.  Columbus narrates that he and Wichita should be busy repopulating the earth.  We learn that Wichita and Columbus broke up not long after their first kiss.  We get a flash to Wichita telling him that they have to slow this down after he asks about her favorite place to honeymoon.  Columbus suggests that the slowdown is not a bad idea because of how dysfunctional they are.  Tallahassee tells him that he will get another at bat because he believes Wichita likes him.Tallahassee asks Columbus to imagine that he is dead and then God gives him another five minutes to live. Tallahassee then tells Columbus to imagine that the five minutes start right now, as Columbus makes moon eyes at Wichita, who is tanning.


They are back in the SUV and Detroit gives them directions to another survivor whose name is Regina. Of course, Tallahassee giggles about how close this sounds to vagina. Regina pulls out a berry pie and Tallahassee says that she is one of them now.  The four start to walk away and while their backs are turned, Regina is attacked by a zombie and thrown over a bridge. When they look over the bridge, Regina has become snack food a zombie.  Wichita then shoots the zombie in the head.

They are back in the car eating hot pockets.  They are talking video games and Tallahassee says that Mrs. Pacman was like Mr Pacman but only in drag with a bow.  They are off to meet someone Detroit tells them is a great mechanic.  When they get there, they find a guy on a construction site. He waves to them and says that he is Eugene Oregon and will be right down.  Tallahassee tells him to wait there and that they are coming up. In the elevator, Tallahassee tells everyone that Eugene is like the president and that he will take a bullet if he has to but Eugene is not dying on his watch. They are escorting Eugene out and he falls through the floor and dies.  SPLAT. Tallahassee says that they are cursed and its like they picked up Bobby Brady's ass reaming Tiki idol and they are shit.  Wichita starts to laugh and Tallahassee says that it's not over yet.

Detroit guides them to the last two people she knows in L.A and when they enter the house, Tallahassee complains that the house smells like Bengay.  There is a picture on the wall of an older couple and the group are reminded of their grandparents and have a moment of sadness. Columbus heads into the bathroom to wash his hands (yes still running water) and he finds the couple they were looking for already turned into zombies. They attack and Columbus uses a walker to fend them off.  Wichita comes to his rescue but the grandmother attacks again.  When the Grandmother bites Columbus, her fake teeth fall out and its up to Tallahassee to use a tire iron to take the old folks out. Tallahassee says that there is nothing more romantic than an old couple dying within minutes of each other.  Tallahassee and Little Rock head downstairs. Columbus thanks Wichita and she tells him her favorite honeymoon spot is Fiji.

They are back in the car and inform Detroit about the dead couple.  Tallahassee says that they are ready to head to the paradise on the eastern seaboard.  Detroit promises to let them know the group is coming.  Tallahassee asks if Detroit sounds hot and they make a plan to stop in Detroit and meet her before heading to N.Y. The group celebrate their survival by eating Regina's pie.

Zombieland is an Amazon original production.  Thus far, they have only produced the pilot and have decided to wait to see how Zombieland is received before creating more episodes.  Obviously, Zombieland is a spin off from the 2009 movie Zombieland.

Essentially Zombieland is a comedy that relies on base humor like counting for instance how many times Tallahassee made a reference to vaginas or the survivors dying the moment they were picked up by the group.  I found myself giggling a lot, especially when Grandma zombies false teeth fell out.   You cannot go into this show and look for a nuanced view of what its like to survive a zombie apocalypse.

We didn't get to see Detroit and I am worried that should this continue, we will discover that she is Black because she is nothing but sassy.  I also have to say that Detroit's character didn't make any sense to me.  How did she get into contact with the other survivors?  Did they all find Onstar cars and talk to her?  It's also a problem if she only exists to be sassy and serve.

Once again there were no GLBT characters, which while typical to the genre doesn't make it anymore acceptable.  This is only the first episode, so it's something that might change of the show progresses.  I would however be worried given the nature of comedy that the representation would be extremely problematic, given what they have done with Detroit.

I guess the best that I can say as that I laughed in spite of myself and that Zombieland isn't a bad way to spend a half an hour.  If you go into expecting nonsense, you won't be disappointed.