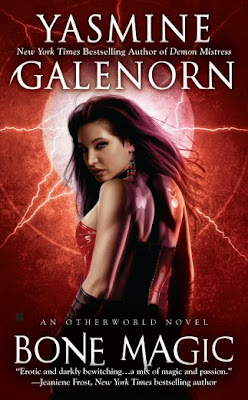 As the war against Shadowwing continues, Camille and her sisters find more and more on their plates. Stacia Bonecrusher, the demon lieutenant is Shadowwing is still at large and plotting to get her hands on the spirit seals. But it’s difficult to focus on her when the undead are running amok, the portals to the Netherworld are open and ghosts and zombies need to be returned to their rest – as if rampaging fae and demons weren’t enough.

But there’s more complexities with Smokey’s family ferociously disapproving of his marriage to Camille – and Camille earning the enmity of Smokey’s father, a dangerous White Dragon. And Trillian returns – which means balancing her 3 lovers.

Then there’s further plotting the spirit seals – it seems Queen Astaria is not content to just hold on to them and there’s growing tension between the Otherworld Fae and the Triple Threat – the three newly re-established queens of the fae. Camille finds her in the middle of demands from both the courts of the fae, and summoned to Otherworld to see the plan hatched with her father despite her misgivings.

Then there’s the Moon Mother, Camille’s goddess, who has her own plans that may force Camille’s path.

In many ways Bone Magic was a much tighter book than previous books in the series, There was much less unnecessary description, the fight scenes were quicker and smoother without the huge pre-amble that used to precede them. We have their daily life, but without it being bloated with unnecessary detail dragging down the whole plot. It was tighter, it moved more smoothly and there were less distractions. It wasn’t perfect – there was still an unnecessary need to describe what everyone was wearing at all time and some really massive geography info-dumps that weren’t needed or that helpful - though I’m impressed at the sheer amount of planning and work that has gone into creating this world. Yasmine Galenorn almost certainly has drawn maps and it wouldn’t surprise me if she had a stack her own height of world building notes.

But we also have recaps. Now, the recaps, as far as recaps go, are pretty good, they’re concise, they carry a whole lot of information in the smallest possible space. But this is book 7 in a series – book 7 in a series that has a lot going on, a lot of side plots and a lot of different factions and powers and a vastly huge world. There is no way a recap can be short and not be an info-dump.

Which leads me to the precarious position of feeling like the world is too large almost – or, rather, that we’re focusing on too much of it at once. I like large worlds, I love them – I love the different realms and elemental lords and the different politics. And I love that all the characters have their own stories and histories – Smokey and Morio and Trillian and Chase and Iris as well as the actual sisters. I love that each story bleeds into the others and affects the others and keeps being relevant – so Delilah’s learning she had a twin reflects on Camille and Menolly because it means they had a sister, the Dahns unicorns don’t just disappear after giving the magical shiny artefact.

I love the layering of these stories and their connections together creating and incredibly rich world with so much going on. It has resolved a lot of its pacing issues and now flows wonderfully with all of these myriad stories coming together.

But… and yes, there’s a but coming, though this may be personal taste more than anything

I don’t know if focusing on storylines would be better. I don’t know if maybe splitting some of the characters up and having a book focused entirely on their side issues would be better. I don’t know whether making one storyline go on hiatus and then focus on the others would be better – I suspect none of them would be – but I’m left slightly overwhelmed with so many story threads. Smokey and his parents, Trillian and his undercover work, the summons of the Dahn, the demand of the Moon Mother and the Black Unicorn, the Triple Threat, Asteria’s own plotting with Tanaquar, rebel demons against Shadow Wing, the big bad thread and then a plague of undead to finish it all with a side order of Iris’s big dark secret.

That’s a LOT for one book and none of those lines are ended. They’re all ongoing, twisting and turning and affecting each other and developing further – I don’t think there was any real grand resolve in the book at all – though there was lots of development.

I won’t say this is a bad thing, but it does mean you get a mouthful and better be ready to digest it all, sometimes I felt like I needed to take notes even with the better, sharper writing.

The characters are really well developed, even side characters because of their own storylines and that really adds to the overall feel of the book – the realness of even passing characters and their stories continuing to have ongoing effect.

We do continue to have some diversity – Morio is one of Camille’s lovers and though he does sometimes feel like he is tertiary after Trillian and Smoky, he’s also the one most likely to be with her and, consequently, the one we see most often in the book. Menolly’s has maintained her relationship with Nerissa which is positive. But at the same time Narissa was absent from the book – while Trillian, Smokey, Morio and Chase were very much present. In total it makes for some decent inclusion but not impressive – it’s there but it’s in small amounts, and limited to single characters.  And I really wish that they’d stop drawing comparisons to “coming out of the closet” or drawing direct links between anti-fae oppression and real world persecution.

I don’t like Rodney either, with his constant misogynist baiting, but it is all strongly challenged and the book does have some good misogyny challenges and comment on the disproportionate violence women face

This continues to be a fascinating series with some excellent characters and an amazing world. It does suffer from bloat, though it is more concise than it was before, and this vast huge world does sprawl so much with all its myriad plots and facets that sometimes I want to reach for a pen and paper to keep everything organised. But it is definitely one I enjoy reading and definitely something I would recommend.