Dead Ever After (Sookie Stackhouse #13) by Charlaine Harris 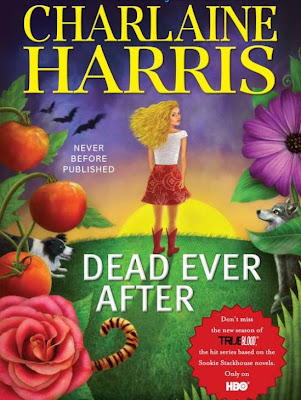 
And it’s the most inept kidnapping in the history of abduction. When she escapes there’s a whole CONVOY of rescuers chasing her kidnappers. There’s literally a line of cars rushing to the rescue of Sookzilla. All their elaborate planning to torture her horribly failed because, in the end, if they’d stopped they’d have been caught and the best they could hope for is to kill Sookie before she was rescued.

But the way Sookie escaped was to reveal to extra #1 and extra #2 that Claude was gay – to which they completely ignored the fact they’re kidnapping a woman for torture in order to get some gay bashing in. Seriously? And Claude ASKED Sookie what homophobia was. He has lived on Earth for years, decades, quite possibly centuries, and the idea of prejudice against gay people is alien to him? No, no way. There is absolutely no way Claude could be that kind of ignorant. And then he decides to react to this by using faerie magic on the 2 homophobes to make them attracted to each other – while he’s driving and while they’re spouting hate. Really?


Is this supposed to be progressive? Is this supposed to be supportive? The gay man who needs educated about homophobia, Sookzilla saved by a gay bashing, the gay man using powers to force sexual feelings on homophobes and homophobes who are so frothing at the mouth they will attack the man currently driving their getaway vehicle AT SPEED?
The ending make no sense. It was nonsense. It was ridiculous. Every part of it screamed that the author didn’t know how to end this book and just wanted to get it done. The convoluted, weak story ended with a cobbled together ending with no reason behind it. It wasn’t just clumsy, it was lazy, unbelievable and just plain bad.
Which kind of sums up this book. This is not the crown on the end of the series. The plot was convoluted, made little sense and was largely in the background. The ending was utterly awful and I kind of want the protagonist to be eaten by something with large fangs. When some series end I feel a profound sadness that an epic tale that has held me heart and soul has ended, I grieve for good series ending. With this book finished all I feel is relief and a vague feeling of accomplishment – like when you’ve finished a particularly onerous housework job