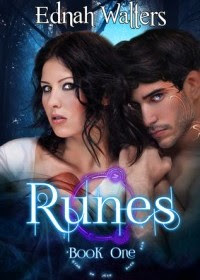 Raine has a lot to prepare for going back to school, particularly her place on the swim team, keeping up with friends and finally getting Eirik to see her as more than a friend. But under it all is her nagging worry and grief of her father’s disappearance that sets a pall on everything. Add in the possibility that Eirik may be leaving and things look bleak

And into that arrives Torin, new super-sexy neighbour who is extremely interested in Raine. More, he can do things, things that make no sense; he and his friends who arrive with him. They paint runes on things that cause literal magic to happen and they talk of gods Raine knows nothing about. Much to their surprise, Raine isn’t as blinkered as the rest of the school and she can see them when they hide and the powers they possess.

This could be a problem for their mission at the best of times – but it’s far more complicated when Torin becomes more and more drawn to her and she becomes more determined to find out exactly what they are.

The problem I have is that while this book has a seemingly fascinating concept and definitely an interesting world, too little has been explained. We have hints of the world, of its background of the whys and wherefores of the magic and the characters – but only hints. In fact, if it weren’t for my own research into Norse mythology, it would be even more frustrating (though it also meant I was saying “he’s a {redacted for spoiler}” over and over again since I twigged it long before the protagonist. The ignorance of the protagonist, everyone else’s insistence that she be kept in the dark because of the rules and her own inability to figure anything out make the book immensely frustrating.

What annoyed me more, especially with my early (accurate) guess is that she was still confused even long after she should have figured it out. She was given enough clues and was actively researching – at that point mere access to Wikipedia should have let her put 2 and 2 together.

The grand revelation didn’t happen until very close to the end of the book. The mystery was maintained too long and not only did we not get any answers, we didn’t get any real progress to the answers either. This made all the magical things that happened before them immensely frustrating because they were just magical events or purely random events that the characters reacted to without fitting into any grander or larger context. Worse, most of the events were seen to be the actions of a jealous girl – a girl who was jealous without cause or reason who overreacted to quite literally a murderous degree.

Without the woo-woo forming a coherent plot we fell back on a rather trite love triangle. She has her long established love interest, Eirik, who she has always liked and now they take the next big step. And then there’s the new hot guy, Torkin, who is so hot and sexy and bad and sexy and hot and sexy and did we describe how utterly sexy he was? Because he is utterly sexy. Let us describe a few more times how sexy he is with his gemstone eyes (everyone has gemstone eyes in this book. There are no blue, only sapphires, no brown, only topaz). I mean, as far as ridiculously over the top descriptions go, it’s not half bad – but it’s trite.

The love triangle has lots of her own doubts and internal rambling with a side order of a jealousy spurts. And she doesn’t seem to find it odd that a man she has been crushing on forever, her love for all time how faces major competition in her affections with a man she just met. I found it frustrating and, well, filler before the big reveal could actually swoop down and the paranormal elements could be more front and centre, than back and random.

I think this filler feeling happened a lot because there was a lot of abortive attempts at some tried and true (and dull) clichés that kind of fizzled out. We had the jealousy between Eirik and Torkin that just kind of hung around. Torkin found a girlfriend to hang around with, who became a full blown mean girl (of course) to Raine. Then Torkin takes her to one side and presumably says “bad mean girl! No cookie!” and she behaves herself. Raine and Torkin have a rather convoluted mutual-hate-at-first-sight-that-means-you-know-they-love-each-other-at-the-end but it peters out rather quickly and becomes just occasional snark. Raine has a missing father but it’s resolved and I’m not sure why it’s there. Raine is bullied at school and 2 seconds later it’s resolved with random woo-woo. Was it meant to show off the woo-woo? Because it didn’t tell us anything about it.

We introduced Andris and Maliina and Ingrid but not real reason for them – except for Maliina’s ridiculous violence. While this is explained a lot at the end, for much of the book we don’t get much explanation of her actions beyond the fact she is ridiculously, disproportionately violently jealous towards a woman her mate has shown a brief interest in. And it is incredibly brief but she’s willing to murder extremely quickly. Coupled with Jess, it becomes an ongoing theme.

I was left with a feeling of frustrated boredom. Things happened – even big dramatic things; explosions and fights and hospital stays and recoveries and lots and lots of Raine’s internal monologue, curiosity and frustration as well as debate about her 2 love interests. But it doesn’t go anywhere, not until the end. We chase our tails with random moments of excitement that we don’t get any context for until the end of the book.

Raine is a moderate character. There is nothing dislikeable about her, but nothing stunning either. She isn’t foolish but nor is she especially intelligent. She doesn’t really do a whole lot of anything, she talks to Torin, she has her slowly degrading relationship with Eirik. She researches without finding answers, she reacts to various events in a confused and realistic manner. I wouldn’t say she’s passive especially, but I would say there’s nothing for her to act on except research which is fruitless. I find it tiresome that she resolves to stay away from Torin but goes to see him constantly, even without good reason. Other than that her friends seem to direct her activities more than she does. I can’t really think of anything she does in the book. In an interesting twist and relatively positive element, unlike many YA protagonists she’s willing to accept her own beauty. Then she kind of knocks it by continually comparing herself to others in a negative fashion.

She has a good friend in Cora and they do get on – but she is very repetitive about Cora’s fault. I think their relationship is generally good but it has an unfortunate whiff of condescension at times.

With most of the events in the book focused on Raine, her friends do have a sense of being more focused on her than on their own lives – it’s not quite reduction to sidekick, but it’s not much more. I think it’s more the situation than the personalities though.

I’ve described the female relationships that generally want me to put them down as “not bad but not great”. In particular I don’t like that the female woo-woo characters are cast as evil for the most part – nor that, given the PARTICULAR woo-woo we’re talking about, the leaders and dominant forces seem to be men: Andris has authority over Ingrid and Maliina, while Torin has overrall control.

There is a moment of wonderful challenge to the mythology’s dismissal of people who don’t die in battle with Raine insisting that people bravely enduring and fighting terminal illness are among some of the most courageous and strong people she knows – which is a wonderful line I loved.

There are not GBLT characters in this book and the only POC is a creole woman who turns out to be someone else entirely in disguise.

In all, I’m left with a sense of meh – it’s a meh romance with paranormal elements that just don’t get involved or revealed enough in the plot to make a major distraction from that. I do think, now the revelation has happened, it has some pretty immense potential. I believe – I hope – that book 2 will be substantially better than book 1.