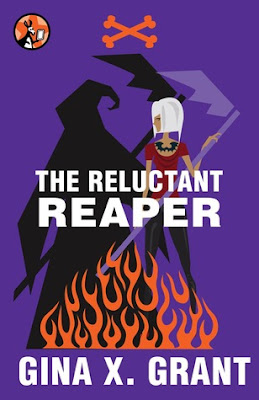 Kirsty D’Arc is happily living her life, doing her thing when her day is spoiled by being attacked by a stapler. A stapler. As if violent office supplies weren’t enough, she then finds her boss is actually trying to sell her soul – to get an extension on his old contract

A dizzying series of terrible accidents finds Kirsty down in Hell, the afterlife. And nothing is what she expected but nor is it easy to fix such a blatant mistake. She’s down there for some time – giving her chance to learn a little about herself, her family – and how little she had done with her life but also what she actually wants

You can tell this book was designed to be funny and light full of quips and wit and lots of giggly moments. It doesn’t take itself seriously, it often jumps into the ridiculous and positively wallows there. Everything is a little silly, a lot zany, a lot whacky and more than a little cartoony. And I can appreciate that – some of my favourite books have been those that are just loopy and out there and make me giggle all the time. It’s especially fun when you take something as serious and dark and mournful and, well, grim as a Grim Reaper and throw all this light, silly, funny joy on top. So it had a lot of potential

And completely missed the mark for me. I don’t think I laughed once, unfortunately, I’m not even sure if I cracked a smile. The humour is contrived, it doesn’t fit even in the zaniness. It relied a lot on convoluted mental monologues while Kirsty chased her own thoughts in circles until she could force out a quip (and setting up your own funny lines doesn’t work). There is an inordinate number of puns – puns on top of puns on top of puns that just don’t work for me even slightly.

It has the odd line like: “When life had handed me lemons, I’d gone online and purchased grapefruits. Victoria’s Secret was safe with me.” That wasn’t bad. But gee-nomes that sting you and alter your DNA? Lead by the streetsmart “metrognome”. She gets angry when it’s misty so becomes “misterical”. The mist that would not be missed?  I didn’t laugh – I did groan. I did look back and see if I had actually read that. Then I groaned again. And really, this is just the tip of the iceberg. It gets worse. It gets so much worse.

This is shaky ground to be on. You have a book whose prime selling point is its humour and, to me, it’s just not funny. That’s crashing and burning right there.

But, worse, humour is pretty much all the book has. The plot is really weak. She dies, she goes to Hell, she wanders around and random stuff happens. That’s about it – each random event is an excuse for some more zaniness and puns and maybe some world exploration – but there’s no actual plot. There’s a vague, background “oh I want to go back to my life” but she doesn’t actually do anything about that or about anything else. She just kind of exists. I think this is trying to set up her character as someone who has no karma – because that is exactly what she is in this setting, she has neither good karma nor bad karma (which is currency in this Hell) because she hasn’t actually lived; she never takes chances, she never does anything, she’s not an active participant in her own life. Which is an interesting thing to explore in both a character beginning to grow and over a series – but there’s nothing else in this book to provide a scaffolding around a deliberately blank protagonist.

The romance is pretty conventional with a side-order of fast-forward since within minutes of Dante’s accidental reap of Kirsty she’s quickly checking him out and we’re zooming down the path to inevitable romance; there was nothing really unique or stand out about it.

The world has interesting elements, the concept of gods there, the way things work, the currency, the lives, the time shift – there are definitely parts here that are intriguing, have potential and could be the setting for some fun stories. The problem is that, like the plot and even the characters, the world is a backdrop for the attempts at humour. The world exists to showcase the humour, to set up the humour, to be the butt of the humour and since the humour doesn’t work for me, the world isn’t shown in a way that interests me.

That same problem applies when dealing with deeper issues – the grief of Kirsty, the loss of her friends, finding what her friends really thought about her, her revelation about how much her aunt and Leslie sacrificed for her and her continued realisation about how hollow her life is and how self-centred she can be all fall flat. These are big emotional moments but I keep waiting for the punch line – or, worse, there is a punchline and it isn’t funny.

In terms of minorities, we have a couple of POC, but they play no great role – in particularly we have an Asian samurai scientist who makes unnecessary references to Hari-kari which is pretty sad. If you’re not going to develop a minority character, don’t just throw stereotypes at them and hope they fit. Kirsty has dead parents (naturally, Urban Fantasy and paranormal romance must have dead parents) and was raised by her aunt and her partner Leslie (yes, Leslie the lesbian). Part of Kirsty’s story is realising that these 2 – who she’d always thought had little time for her – actually sacrificed their hopes and dreams to save Kirsty from being raised by her prejudiced, controlling and highly unpleasant grandfather. It’s a poignant element that’s well done – but after that brief scene by Kirsty’s bedside, they’re not seen again.

Kirsty herself faces a lot of patronising from Dante which she does call out – which I like. But at the same time she’s not the most sensible of protagonists. It’s hard to call someone out for treating you like a child when you act like one.

In all – we have a character who isn’t really developed enough to be interesting – though she has potential. A world that is developed more for its ability to provide laughs than anything else. The whole thing feels like an interesting concept, with some good potential – and then it was badly ravaged by some clowns.

A copy of this book was provided through Edelweis
Posted by Sparky at 3:00 PM