The Walking Dead Vol 8: Made to Suffer 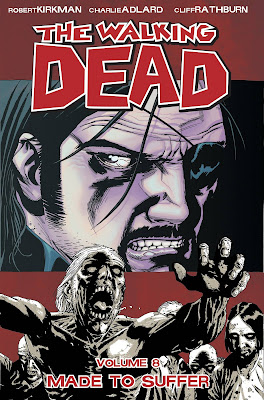 There’s not much to summarise this volume. The Governor has found the Prison and unleashes the full force of Woodbury against the group and they desperately try to defend themselves

Lots of action, lots of combat, lots of death.

If there can be said to be any theme in this action packed volume, it’s proving just how very mistaken the group was in their complacency and sense of peace we had in the last volume. There they were beginning to relax, plan a future, settle down, build a life.

This week, that was all destroyed. Everything was ruined - we can see this as best symbolised by Rick giving Carl back his gun. Last volume he was ready to let Carl be a kid again, now he is back to being a warrior. The upbeat, even delusional, optimism of last week is replaced by battle plans and even preparations for the worst - having to leave the prison. It seems odd to us to see a prison be seen as something so desperate to occupy and hold, especially as Dale and Andrea flee, but as Axel says (and this is from a prisoner who was actually incarcerated there) this is their home and they see no place for them outside its fences.

Of course, this shattering of the peace was truly shown by the vast amount of the cast was killed. I think this was the first volume that truly established the sense that anyone can die in this series. We fully expected Axel, Patricia, Billy and Alice to be expendable - but Tyreese, Hershel, Lori and, especially, Judith were a shock and showed that no-one (except maybe Rick) is truly safe. Carl has an excellent line on death in this series - everyone dies, he expects no different, it’s just a matter of when and again shows his shattered childhood.

What almost adds to the tragedy of this volume is the pointlessness of it all; Martinez died telling Rick how good he had it in the prison, how much the people of Woodbury would have a better, safer life there. That was what they were fighting for. But the Governor’s greed, evil and rage ended up not only with his death and the disillusionment of his people, but the prison itself so badly damaged that it was no longer useful for anyone. The Governor’s violence - monstrosity even - destroyed it for all of them.

One last element we had was just how far the people of Woodbury had hitched their hopes to the Governor that they were willing to believe his lies, deluding themselves, even when they know what he has done and how he behaves - something we have seen before at the arena matches. The Governor was even telling them how evil and violent Rick & co were while also assuring the crowd that their arenas would be back soon; right up until the Governor's melt down becomes too much for Lily to ignore.

On the issues - most of this volume was combat so there was considerably less than usual, but still some major points. On the plus side, Andrea and Michonne were not only capable fighters, they were combat monsters; they slaughtered the people of Woodbury in vast numbers, they were terrifyingly efficient defenders.
And while Andrea was an awesome sniper, Michonne was a great tactician, more than just a sword wielder; considering strategies, noticing weaknesses like the tank - and she was the one who lead Tyreese into battle, no question and rightly so because she was an excellent battle leader.

The problem was that, again, the men aren’t exactly listening to the women. Michonne has some brilliant ideas, but only Tyreese listens and him grudgingly. She has to nag to get him to follow up on her excellent plan. Dale decides, again, to leave which, yes, Andrea and Dale have discussed before; but given the timing and the events I would expect Andrea to have more to say than she did. I’m not going to question his decision because he had a point and it was complex, but I would expect them to discuss it more.

Lori - she was there hectoring again. Now, I do think that Rick should have shot the Governor rather than let Tyreese die because it was a choice between Tyreese’s actual death or Michonne’s possible death (and that had the really big assumption of the Governor being honest) it was clearly the wrong decision. But Lori, from her place hiding in the basement, attacking Rick for his bad decision so aggressively came off so wrong - especially after 7 volumes of Lori doing very little but constantly nagging and hectoring; she has spent her whole time in these books as a nagging stereotype.

And when they left the prison she couldn’t keep up with Carl. Seriously. Running for her life, a 9 year old child carrying a heavy load has to slow down for her? It’s a sad end to a pretty awful character.

The action was really good and worthy of a 4 - but it went on too long and got a bit drawn out.
Posted by Sparky at 9:00 AM