The Monsters in Your Neighborhood (Monsters #2) by Jesse Petersen 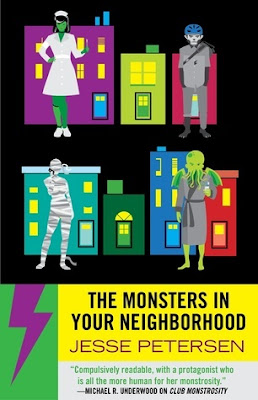 Natalie is the new leader of the Monster support group but it’s not exactly peaceful. Despite having come together closer than ever before, they all live under the shadow of Van Helsing’s declaration of war. After such a delay, they have only just started to relax

As the group turn on each other with suspicion and spite – fanned by the flames of Van Helsing’s divisive tactics and even a traitor in their midst, Natalie must hold them together to face their old foe.

This is one of those book reviews I’m having trouble with – because a lot of what I’ve said about the first book in the series still applies. I don’t like my reviews to sound repetitive, but this book is exactly what you’d expect from the last book.

The monsters are still extremely fun characters – they continue to be everything they were before – while different and odd and, yes, monstrous, they’re equally human. And by human that doesn’t mean nice and compassionate  - no it means petty and prone to panic and likely to be selfish and frightened and resentful and spiteful. Human doesn’t mean nice – and I think too much in Urban Fantasy, a monster striving to hold onto their “humanity” means a monster trying to be compassionate and kind. But that’s only one side of humanity – we’re not all nice. We do fall apart in a crisis. We do look for someone to blame rather than looking for solutions. We are paranoid, we do tend to lash out when threatened or upset or angry. We don’t always make sense. We don’t always act sensibly and we certainly don’t always listen to reason.

This book shows that extremely well with the story set up to try and drive wedges between the monsters of the group. We have seen characters grow – with Linda gaining some strength, Kai and Natalie growing closer with mutual respect and, of course Natalie and Alec have really developed their relationship; all excellent things I wanted to see. But all of that is threatened with the external menace mixed with the individual threats – you can see who is closest to who by the way they bury their suspicion, but those close relationships also mean those who are just friends worry that they’re going to be sacrificed for the sake of loved ones. The paranoia, backbiting and lashing out between them is so very typical of a realistic response – especially when you get directed threats like the Book of the Dead, carrying spells that can kill immortal mummies, is stolen which make Kai and Rehu paranoid and frightened. It’s really well done.

I like how Natalie has grown as well, she used to have a lot of insecurity but she has really come into her own as a leader – clearly standing above the others. She’s really believable as a leader; she isn’t perfect by any means and she certainly has doubts, but you can see why the others believe in her and support her. And I definitely love how Linda has grown with respect to dealing with the man who treats her poorly – oh yes yes I do.

One thing I do like is that perhaps the most monstrous of the group, Patrick the Cthulu, seems to be the most decent and most kind of them as well. Or maybe he just hasn’t been in the group as long as the rest so hasn’t had chance to develop all those little annoyances and grumbles that people forced together for a long period of time tend to develop.

While I was prepared to dislike Igor originally because I had a bad feeling about where he was going, Alec managed to spin it round to make it clear what Igor is – whatever you expect him to be. Igor is the consummate assistant who can’t help but serve and becomes whatever people need him to be; whatever role he assumes, he becomes that stereotype. He’s an interesting take on the whole concept of Igor.

The story itself is more of a background to show off these characters. This is definitely a character driven story more than a plot based story but it truly works to advance them as people in a realistic and organic fashion. I like the characters that I don’t need the plot to be action packed, I don’t mind if we spend more time on character interaction or them reacting to each other or bickering or examining their issues as monsters or their angst – because that is what this book is about. It’s about the monsters trying to be people not the monsters breaking heads and being all growly.

So the story generally works really well in doing exactly what it sets out to do. If the characters were not so well written, it would be slow and clunky because it is very heavily based on character interaction; but that’s the point and the characters work. And it’s not like the plot is flat we have twists within twists with some extra twists on top to keep things interesting but still not distract from the characters

It does have a shaky moment towards the end. Before Natalie’s brilliant idea of combating the nefarious actions of the Van Helsings, the monsters have a distinct upper hand. With all their strength they’re in hand to hand combat with the Helsings… by all accounts they could have won very very easily and they stop. Nowhere is that really explained to me. I mean, Natalie’s plan is awesome as well – but I don’t see why this plan can’t be coupled with pounding the Van Helsings into a thin paste on the floor as well. The plot loses me a little there.

Inclusionwise we still have Kai and Rehu who are actual POC mummies and pretty awesome characters (everyone in this book is an awesome character) with only really Natalie and Alec being more prominent than them. There are still no GBLT people.

This continues to be an intriguingly novel series. I like the characters, the world is interesting and the whole format is just so different from most of what’s out there. It’s funny without being a comedy and amusing without being too light, the characters are human without being boring and the issues and broad without being too introspective. I won’t say it’s exciting or fascinating or even a must read – but it’s a definite plus on anyone’s book shelf and if you don't read it you really are missing out. You can also be pretty sure that it will be quite unlike any of the other books next to it. I can unreservedly recommend it and the whole series and I can't wait to see what's in store for Natalie and her cohorts next