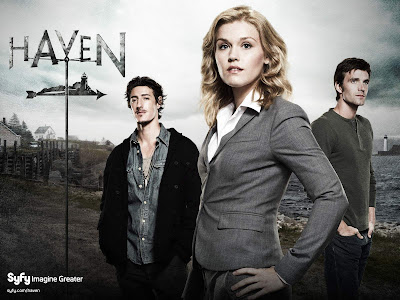 Haven is back – and we left it on a pretty massive cliffhanger last season with the barn and some hints of answers and Audrey being far more central to the Troubles than we had ever imagined.

And this season opens inside the barn – with Duke who leaped in to save Audrey after everything went so wrong at the end of season 3. The strange white place inside the barn is falling apart, holes are opening in walls through which we can see sweeping stars like a Star Trek ship going to warp (this may be my geekiest comparison of all time). The walls replay flashbacks of the last episode, of James dying, of Audrey agreeing to return into the barn. Duke watches, transfixed, until a hole opens up underneath him and he falls into the starry blackness – and lands in water.

In the seal tank of the Boston Aquarium. That was unexpected. The news report is watched by a woman who hears him ranting about Audrey Parker – she suddenly gets up, grabs her things and leaves.

In the hospital, cuffed to a bed, Duke learns he’s been listed as dead for 6 months. Which doesn’t help his case, especially with all the fake IDs he carries around. He’s in trouble.

As are the people of Haven it seems – judging by the loud rumbling noise that then blasts in all the windows of the bookshop.

Duke gets a visitor, a woman claiming to be Audrey Parker but when she visits Duke in hospital claiming to be his sister, she’s not Audrey. She’s also not very coherent. But she is Jennifer Mason, she worked for the Boston Globe, she rambles a lot and was diagnosed as schizophrenic because she kept hearing conversations repeating in her head – conversations including the names of Audrey, Duke and Nathan. She started hearing them 6 months ago, when Duke and Audrey went into the barn. Duke tries to explain to her about the Barn and Haven and the Troubled (and that she might be one of them) which is a whole lot to sum up so quickly. It’s not very reassuring to Jennifer, nor the fact that Duke is a criminal nor that he wants to go to Haven. She agrees to co-operate simply because the alternative is her believing she’s “crazy”.

They escaped with a paperclip and Jennifer’s boobs and Duke calls the Teagues because they always know what’s going on. Dave answers and after the shock of Duke being still alive, he tells Duke that a lot has happened – among them the Troubles not going away. And Nathan has gone of the rails.

Nathan has a beard now, he’s in a biker bar and a biker just paid him to be able to hit him. Or maybe a bet. He has a whole queue of bikers paying to hit him (Nathan, remember, feels no pain – but can still be damaged). Duke and Jennifer watch for a little bit before Duke approaches - reunion time! Lots of hugs, I’m sure they’ll be hating each other by episode 3. But he’s still looking or Audrey.

There is no Audrey – but in a bar there is a bar tender called Lexi who looks just like her… looks like she’s lost her memories.

Duke and Nathan’s theory is that Nathan shooting Fake!Agent!Howard was the reason why the Troubles didn’t go away – the Guard was particularly unhappy with Nathan about that and since Nathan thought he’d killed Duke, James and Audrey by killing Howard he went on, as Duke put it, a 6 month long pity party. He’s now in hiding from the Guard. Time for the whole gang to go back to haven where Nathan can uses his resources to help find Audrey (like he even has those resources after 6 months away).

In Haven the Teagues and the new chief of police – Dwight – examine the blown up shop. Which means more covering up – Dave is very snarky and Vince criticises him for not helping but Dave is annoyed that the help they needed was driven out of town. They argue - but there’s no time for that, not with someone on the beach frozen in glass.

When Duke, Nathan and Jennifer arrive in town they’re stopped by a rapid road block and ambushed by the Guard with guns, including Jordan. The Teagues arrive, Vince with orders and Dave reminding her that Nathan saved her life. Dwight takes off his bullet proof vest reminding her that if Jordan shoots, it’s him who will die (he has the “awesome” power of being a bullet magnet. The gun issue resolved, Nathan tells them all that Audrey is still alive and he needs to find her. Especially since Jennifer heard Audrey talking to Howard in the barn – a way to end the Troubles forever; by killing the person she loves the most. By killing Nathan.

More debate is shelved by a tornado roaring into town causes some destruction then fades away. When it’s goner Jordan tries to move Duke and Nathan to a safe house but Dwight wants their help – and Vince agrees – pressuring Nathan to help. He orders the Guard to get moving, they’re reluctant but follow his orders. Duke isn’t best pleased with Nathan’s sacrificing himself plan.

They go to the police station as people begin to notice that Nathan is back and Dwight has a full wall of many many incidents that have been plaguing Haven – all of them involve wind, storms or lightning (even the man encased in glass was covered in a fulgurite). That rings a bell – Marion Cladwell, Audrey’s first ever Troubled person could control extreme weather.

Jordan goes to confront Vince saying she and the Guard thinks him sparing Nathan looks weak, and Vince pulls out 8 levels of menace to dispute that. Jordan snarls that it’s all about Audren – since Vince had a crush on her when she was Sarah – she snarks about the number of men who love Audrey and how she doesn’t understand the appeal.

Duke, Nathan and Dwight arrive at Marian’s and find it utterly freezing inside. Duke and Dwight go back outside, it’s too cold for them to endure but Nathan can’t feel it. Marion is sat in her chair, frozen but alive – and she blames Nathan for making her Trouble come back, the Troubles were supposed to go when Audrey left. Her Trouble came back because Conrad, the man Audrey showed her she could love, died of a heart attack after the meteor storm. Nathan tries to talk to her, to get her to move on in her grief in between mourning how he caused all this damage by not stopping the Troubles because he couldn’t let Audrey go. Nathan collapses from the cold as he tries to get through to her and she mourns for Conrad. As he hits the carpet, the skies clear.

Nathan leads Marion outside and they deliver her to the Teagues to look after. Dwight thanks Nathan and hands him a police badge – the town will never accept him back as chief but he needs Nathan back on the force to help like he did today, since Dwight isn’t holding things together. And Nathan does need police resources to find Audrey – as pointed out by Duke.

Duke joins Jennifer at the Grey Gull and finds it, to his shock, open. Run by his brother (extra shock) who appears and hugs him

At “Lexi’s” bar we learn she’s a new hire and that she’s a natural at the job; though she wants to meet a good guy just as a man comes in and asks for a beer. A microbrew from Maine. The man is William and they continue to flirt and plan to get to know each other better.

A man comes in with a gun, causing Lexi to freak out a little, though William seems to think she should be able to handle him. Lexi goes to take his order – and he pulls a gun on her and tells her to sit down. She protests that the cash box has gone to the bank – but he doesn’t want money. We don’t learn what he does want because William hits him with a pool cue and grabs his gun. Lexi hides and the man runs out the bar.

Afterwards Lexi says she doesn’t think she’s ever been that close to a gun before. And William drops the bombshell – the guy was there to stop William talking to her – because he knows a secret about her. He tells her he knows all about her which is just as creepy as it seems – especially when he tells her she’s not Lexi, she’s someone else entirely. And she needs to let him help her learn who she is or a lot of people are going to die.

This season? I need to know the Teagues’ story. It has to be told! At very least I want to see what Vince can do that makes him so scary!

As for Jordan – I am torn between loving the whole lampshading of how all men love Audrey but at the same time hating that it is presented as an angry jealous woman attacking another woman rather than shoddy writing – it’s the same feeling I got when, on True Blood, Pam snarked about everyone loving Sookie’s “magic fairy vagina.”

In all, I’m intrigued and curious. I want to know where this is going and I think we’re going to get some revelations. I kind of want to slap Nathan with a fish and suspect there’s going to be lots of gratuitous angst moments –but then, I kind of wanted to slap Nathan with a fish ANYWAY so it’s not like the character is getting worse, he’s just a different kind of piscine slap-worthy.