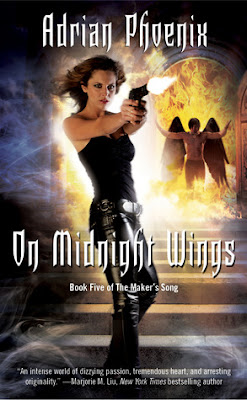 Dante and Heather are still separated by the various factions trying to hunt Dante down, while Lucien, Von and the gang continue to hunt for them. But between Fallen machinations and the call of the Llygad, neither is able to launch the rescue efforts they would like to.

Heather continues to extricate herself from tricky situations to try and reach Dante, but every time she breaks out of one trap there appears to be another waiting and time is running out – Dante, held by Dion and tormented by Loki, is fraying. His fragile mind is growing more and more damaged as he approaches his limit

If he breaks, he will become the Great Destroyer, the Unending Road, using his awesome powers of creation for destruction – and then the world is doomed or those who love him most may be forced to kill him.

Right, let’s start with some major positives. First and foremost, the 8 gazillion unnecessary cast members are largely taking a back seat. Largely. They’re still there and mentioned far too often in passing and in any other book I would be yelling “kill some side characters, damn it!” but for this series they have been cut down by them both teaming up (so forming less random groups with their own agendas) and by them just not getting the same level of page time as they have in previous books. For the most part, the book has managed to stay relatively focused on Dante and Heather with only a few distractions as you’d find in most books.

Another positive is that the bad guys that were actually relevant this book were fairly major powers. Mauvais was there, hanging around finally coming to terms with just how big a hornet’s nest he’s kicked which was great fun to read – I do like to see some good comeuppance. Heather’s father also took a step back but he’s still lurking in the corners so I don’t think we can say goodbye to him just yet. The FBI and Shadow Branch lurked around but after some initial forays fell back to leave the action more centred on the Fallen as secondary but mainly Dion. He’s a later arriving bad guy with a very petty, personal agenda more than the world destroying but at least he has some decent supernatural oomph.

Another major plus for me was that all of the overwrought emotional language, endless Dante flashbacks and fractured viewpoints, the little girl he saved, the endless memories of Chloe and papa Prejean – all the pointless minutiae of Dante’s tortured past and shattered psyche – actually came together and were relevant beyond the whole “woe is Dante, poor Dante, our tortured anti-hero is the most tortured of them all!”

It’s actually ironic considering how overwritten this series is that we haven’t truly had much information on the Great Destroyer, the Unending Road and what that means. This book brings it home – the true consequences of what they’re fighting for. Not true love. Not whether the Fallen get their creator to repair/renew/rebuild Gehenna. Not whether the various vampire societies get their shiny new True Blood vampire for whatever reason they want it – the ultimate ending is Dante’s cracked mind finally shattering, his Bad Seed programming coming up and his anger and pain exploding in horrible messy ways that results in the whole world being reduced to ash in the fires of his rage. And all those people pinning their hopes to him have to decide to stop him – if they can.

The epic consequences are here, the world shattering stuff, the elements that have been lurking in the background and slowly added to but generally have kept a step back away from the main story to date. And simply by shifting the tone like that, the whole overwrought language and flashbacks and general writing becomes more important, more useful, more fitting to the book because they’re all now relevant – whether storywise or simply thematically.

One thing I have to say about this book – in fact the whole series - is that it’s dark. It’s unrelentingly dark. It’s grim. And I don’t mean this in a “oooh where are my happy ever after and pink bunnies?!” way, I mean in the fact that nothing good ever happens. Good, in this series, is managing to escape from something bad in time for the next bad to happen. It’s not necessarily a bad thing, it shows just how much Dante is in constant demand and how many people are harrying him, but at some point I kind of want him to catch a break. Or at least turn more of his enemies into goo or three-headed-holy-chanting-chimera.

To flip the other way? Not so much in this book, but certainly we have foreshadowing of all those micro characters till being ready to come back – we didn’t focus on them but Caterina and Dion and Gillespie and Rutgers and the Shadow Branch and the FBI and Heather’s dad – they’re all still out there and all still plotting along with the newly introduce Loki, Mauvais who may not be dead, the different factions of the Fallen are still plotting and now Leviathan has risen from the depths… they all kind of took a step back from clogging this book but they’re all circling like vultures of excess plot waiting to fall on the series and clog it up again.

Minoritywise we have Emmet (a gay man) and Merri (a Black woman) who kind of hover in the background of the main team. Having been badly treated by the Shadow Branch they jumped ship to Dante and are now trying to prove themselves worthy of his team’s trust. So far they’re not allowed to meet him and they follow Silver and Von around doing as they’re told in the hope of being inducted further in. They’re not bad characters at all, but I’d like them to be more integral.

Several of the factions of FBI are POC and Merri’s sire and bigwig in the Conseil do something (sang, I expect) is a WOC but her faction doesn’t seem to be involved as much as the Circle de Druide.  In short, it’s a continuation of the series – it’s very good at making sure there are lots of POC and the odd GBLT person hanging around but they’re usually pretty ancillary to the plot line.

Annie managed to go an entire book without epicly screwing up. This may be a record. I still don’t like how this series treats mental illness, as I’ve mentioned before. Especially when you consider that the big bad darkness, the ultimate threat against which everyone is so terrified of is Dante going insane. Ultimately, the mentally ill Dante is the greatest threat the world faces.

In terms of women we have Heather who is resourceful, strong, rescues herself twice and never just hangs around of rescue. She’s determined in the face of career and parental disapproval, brave in the face of ultimate danger, but still ready to jump back even if uber-twu-lub Dante is a threat because she’s not so great a fool to ignore that he is a threat. She is protective of her family and loved ones, she refuses to be coddled and kept safe and certainly won’t be “got rid of”. She is aware of her own capabilities, she takes risks but they’re sensible ones. She is an all round excellent character.

The other women in the series (except Annie) are not nearly as explored – but they show a similar level of competence and skill, determination, agency and motives – even when heavily influenced (like Caterina and Merri by their organisations) they still maintain a measure of personal autonomy and opinions. Party line is not their watchword. And they don’t hate each other. We actually have several women, some of them gathered together and they don’t instantly loathe each other! It’s probably a little depressing that I’m impressed by this.

In all this book felt like an extremely good book. My only doubt is that I’ve read this series quite quickly (I got an ARC for this book and realised I needed to catch up on the entire series as soon as possible) and I think my opinion is slightly skewed by a low expectation I had picking it up. I expected clogged storylines. I expected overwritten clunkiness. I expected 8 gazillion characters doing irrelevant things I didn’t care about but all of which would make Dante the saddest panda in the history of sad pandas.

And that didn’t happen. Well, it did happen, but it was more restrained and it wasn’t nearly as bad as I anticipated. I was relieved reading this book, relieved and hopeful and could get excited again because there was plot I could engage in and get back on the rails. I am still too wary to be hopeful for the series, but this book was an uptick to all the things that make them worth reading.