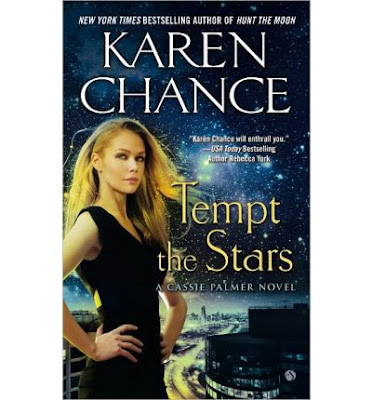 When we last left Cassie two years ago, she was on the verge of death until Pritkin gave her the energy so desperately needed, thus sacrificing his freedom.  I am sure that many fans of this series screamed in frustration at this point, I know I did.  Tempt the Stars doesn't begin quite where Hunt the Moon left off.  It's now been a week since Pritkin disappeared and Cassie is determined to do whatever he has to to bring him back from his fathers clutches - even if she has to go to hell.
Tempts the Stars is filled with all of the elements that fans have come to love about the series.  Cassandra continues to be filled with spunky agency and though at times it is seriously annoying because she jumps headfirst into situations without thinking them through, one cannot help but to route for her. It is only when we consider how little Cassandra knows about the office of Pythia, her mother and even latent powers that one realises that she been left absolutely defenseless despite the power she has. Yes, I know that this is yet another trope in urban fantasy, but Cassie's never say die attitude keeps the story moving without being bogged down in self pity.  It helps that in the end, Cassie accepts who she is and is thankful.
For all of her inept bumbling, Cassie continues to be a strong protagonist.  Chance avoids falling into the trap of simply turning her into a weapon as a way to express strength, which is far too common in urban fantasy today.  Cassie's goal is to save Pritkin which in many ways is a change in gender roles because not only is not waiting to be saved, Cassie is actively trying to save the big strong man. I love that though Cassie has her moments of modesty, she is not above whining about not being able to masturbate in the shower because of sensitive vampire hearing.
Chance spent a great deal of time in this novel doing world building. Yes, I know, world building in book six.  I do however think that this is a brilliant writing strategy given that it has been two years since the last book in this series.  It meant that one didn't have to remember much about the series itself to get caught up in this new world.  Learning about the demons and their relationship to the Gods added new depth and a fascinating twist.  I love the way that Chance was able to bring so many different mythologies together to write a story which literally keeps the reader at the edge of the seat.
For all of the world building that Chance engaged in, Tempt the Stars retained the issue of clutter and too many actions scene that  Hunt the Moon had.  As much as I was engaged by the world building, there seemed to  constantly be battle that Cassie had to engage in and I felt as though Chance could have accomplished even more by removing some of the fight scenes.  Too many of them felt like filler and there were times I felt my eyes glazing over because they were hard to follow.
Though this novel moved through time and even a different realm the only character of colour is once again Caleb.  He still feels quite tokenized because Chance has never told us anything about him, or given him anything to do other than to pull Cassie's butt out of the fire.  In many ways, Caleb is written like a card board cut out of Pritkin, with dark skin and though Chance actively suggests that this is because they are both war mages, it reads as lazy writing. If Chance can bother to tell us about Casanova, a vampire who seems to exist for histrionics, there is no reason that a few paragraphs could not have been devoted to giving Caleb a decent backstory, or at the very least, a true motivation for his actions.
In terms of GLBT people this series continues to be erased.  I find it stunning considering that Chance has brought Jim Morrison back from the dead and has a world that includes demons and ancient Roman Gods.  Would it really have been that hard to include a GLBT character?  This is after all book 6 in this series.

Tempt the Stars was well worth the two year wait and I cannot wait to read the next installment in this series.  I would still prefer if this series spent great time on the narrative rather than the action, though I am satisfied with the great world building that Chance did. It's clear that some exciting adventures lay ahead for Pritkin and Cassie and I cannot wait to follow where they lead.