The End by G. Michael Hopf 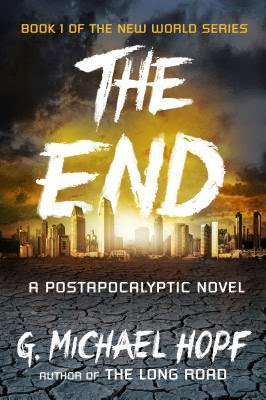 Gordon is a family man and an ex-marine in an America that is becoming steadily more beleaguered by terrorism. Until the last blow – an EMP airburst shutting down virtually all electronics in the entire country. Already having learned harsh lessons about who deserves his protection, Gordon acts quickly to protect his family before the world falls apart

This book is a DNF.

I had high hopes for it – I love dystopian fiction, I do like me a good apocalypse and I’ve seen previous books and shows take on the idea of all electronics being knocked out and what that means for modern society and was interested to see what this book’s take on it would be.

They say curiosity kills the cat. Alas, it can also give a reviewer a headache, a nasty surprise and the decided urge to empty a brewery.

As with most DNFs, there are many reasons why I don’t like this book, but the first and main one is Gordon. The protagonist, may the road of his life be liberally scattered with legos for ever more.

Gordon is the ultimate Gary Stu. What he believes is true, no matter how dubious, what he does is wise, no matter how silly and his insight is always well received by right-thinking people, even if it’s foolish or even evil. When the power first goes out in San Diego, Gordon knows the whole US has been brought down. Why? Why, when even the military’s own expert says that the scale of the EMP vastly exceeds any models they have ever seen? There is no way he could possibly know that the EMP had not just hit the city – or even just the neighbourhood -  and that help was arriving quickly; but no, Gordon KNOWS. And on the strength of that… he ACTS (including dropping $2k on emergency supplies). And everyone falls in with him, following his instructions and accepting his decisions (like having his whole family turning their garden into a lavatory) with only the most minimal of protests.

Not only does he ACT, but he’s already made plans for this kind of eventuality – like cashing in their pension and keeping the money in his attic. Without telling his wife. Classy guy – and when she finds out there is, again, minimal conflict. I have to say, I think most spouses would have invested in a divorce lawyer or some pruning shears, but she has only mild consternation about her husband screwing their whole future for a paranoid survivalist fantasy without telling her. When he decides to pull a gun on a guy asking for help, again, the people with him make a token protest then get in line.

Gordon is also an arsehole. This is probably apparent above – Gordon makes decisions and everyone else has to get in line (not that they’d ever REALLY disagree with Gary Stu). But Gordon has also decided (after some evil liberal machinations had him kicked out of the military for the piffling crime of shooting an unarmed Iraqi – oh, I mean “Haji” – more on that later) that he’s dedicating his life to looking after his family. His philosophy is basically “screw everyone else” regardless of need. This includes, in the few hours after the pulse, a man who needs to get his heavily bleeding pregnant wife to the hospital. When he asks Gordon’s friend with a working truck to help, Gordon pulls a gun. He needs that truck to haul groceries, damn it, we have no time for your dying wife and child! Yeah… classy guy

Ok, moral ambiguity is kind of an essential for most dystopian fiction. The characters are forced to make difficult, near impossible decisions for the sake of their own survival, their loved ones, their group. It can be done amazingly to really ratchet up the tension and to bring home what a safe world we live in. It can be used as a wonderful tool to show a character’s descent into ever more deeper shades of grey, it can make you think hard and painfully about what we would do in that same situation. Moral quandaries are the bread and butter of a dystopian

But the dystopian hasn’t happened yet. As I said above, Gordon makes massive huge leaps of Gary Stu logic to assume there’s a dystopian coming. He isn’t remotely in a position to be forced to make terrible decisions by uncompromising circumstances and he doesn’t need to be – he was ALREADY that selfish with an intense “fuck everyone else, I got mine” attitude. So the man with the bleeding pregnant wife? Point a gun at him! Gordon has no time for such silly shenanigans! He needs to make sure his family has horded all the tinned goods he can find!  The world is ending (or so his Stu senses say). Good thing the guy with the working truck didn’t treat Gordon the same way

There could have been a decent story about a complete arsehole stepping up and finding his arseholery perfect for keeping his community safe and together and even finding redemption though it – but that would suggest writing Gar- err, Gordon as anything other than flawless and right – which would require conflicts and reality checks and Gordon acting according to the situation rather than his own paranoid fantasies that are unerringly accurate. We can’t have that! That might actually require nuanced writing.

Speaking of, let us discuss this gods awful writing. The dialogue is ridiculously stilted – people don’t have conversations, they make little speeches at each other. Reading the dialogue aloud is actually kind of funny because it’s so convoluted. Gordon’s family is ridiculously twee (and, of course, bow to his every word) and overdescribed as such, to try and emphasise just how amazingly perfect they are. It’s also extremely repetitive. The country has been hit by an EMP pulse. What’s that? Don’t worry, wifey, Gordon will explain it to you! And you neighbour, do you know what an EMP pulse is? Don’t worry, Gordon is here to explain it in painful detail! Hey, that cat, that cat there, I don’t think she knows what an EMP is! Quick, copy and paste the damn long winded, excessively descriptive explanation AGAIN – then add even more unnecessary information! All of this is done in the most ridiculously long winded way imaginable. It rapidly reaches a state of parody – but it’s clearly very very serious.

I also suspect this book may actually have been written by Ann Coulter. We open with Gordon and his fellow marines in Iraq and we’re treated to the Big Brave Strong Marines (who are awesome in all ways, of course they are) taking on the evil, insidious, weak “dirty motherfuckers” “hajj” and “muj” (that would be the US spending “blood and treasure to create a new democracy”). And then Gordon is brought low by the evil liberal media and liberal establishment maliciously accusing him of killing unarmed, helpless Iraqis (which he did, but he had good reasons, damn it! Evil liberal media knows nothing!) We have O’Reilly trying to talk sense (i.e. oppression and violence) to the silly silly liberal politicians. Of course the terrorism is terrifying and needs more of a crack down! And the borders need securing (well, the southern border anyway – because that’s not coded language at all)

I broke when, in this US that has been utterly destroyed, after hearing reports of how nearly everyone is going to die, the president decides to nuke several nations to ash. Because the whole country may be in ruins but one of these nations may be responsible so kill ‘em all!

Yeaaaah, the end. My tablet is too expensive to risk me throwing it against a wall.

Oh, add to all that not-even-subtle racism a homophobic joke and the women being meek, mild followers. Gordon’s wife may as well not even be a character, she’s an appendage. She’s Mrs. Gary Stu and has no real personality except fear, grief and obedience – certainly nothing approaching conflict. And, considering some of the crap he pulls, there should have been conflict from any woman with pretensions of having a spine.

At this point the rest of the book could have been toweringly awesome on an unprecedented scale and it would still be awful – because the part I read was so dire as to drag the whole thing down into the depths.